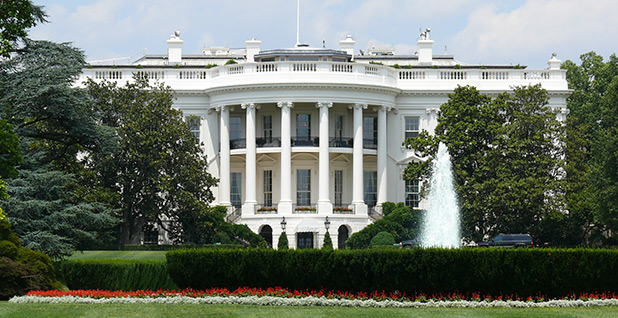 The White House is pressing Congress on a list of spending cuts. Ad Meskens/Wikipedia

Momentum is building for moving the White House’s $15.4 billion package of election-year spending cuts after the administration sidestepped a conservative push to reopen this year’s bipartisan budget deal.

GOP lawmakers in both chambers said they are open to the rescission package that would focus on cutting unobligated funding from previous years, including about $4.7 billion for Energy Department loan programs for fuel-efficient vehicles and renewable technology development.

Budget rules would allow it to move through both chambers by a simple majority, meaning no Democratic support would be needed.

Senate Majority Leader Mitch McConnell (R-Ky.), who previously said he was uninterested in revisiting the budget deal, said yesterday the Senate would "take a look at the package" if the House passes it. He emphasized it would not violate the hard-won accord.

Many Republicans said they are relieved that at least for now the White House has opted not to press for cuts in fiscal 2018, which would jeopardize the bipartisan deal that raised both military and domestic accounts.

"This rescission package has nothing to do with the [recent omnibus spending bill]. It’s looking at funding that has been sitting aside more than one, two and three years. It cannot be used and is just sitting in an account," said House Majority Leader Kevin McCarthy (R-Calif.) yesterday.

He asked, "Why would you let it sit there and waste and not give it back to the American public?"

Rep. Tom Cole (R-Okla.), a senior appropriator, added, "I don’t think there’s anything in this package that will cause heartburn on this side of the aisle, and I think some of the heartburn on the other side is pretty theatrical."

"The hard right, the Mulvaney wing of the Republican Party, seems to have the upper hand against what most Americans want," he told reporters, adding that "doing these types of rescissions in the Senate would sour the ability" to complete the appropriations process.

Other senators suggested they were at least willing to look at the package and backed some of the cuts.

"There hasn’t been much activity in that account," she told E&E News. "I think the last loan from that was like seven years ago. And so it has been one of those programs that I have said could be taken off the books."

However, Murkowski was unaware of the proposed rescission of $523 million from DOE’s loan guarantee program, nor the $160 million the administration wants to scrap from the expansion of that authority for renewable projects during the Obama administration.

Murkowski indicated she has issues with the roughly $7 billion in proposed cuts to the Children’s Health Insurance Program (CHIP).

"I can’t understand why we would go after CHIP," she said. "It makes no sense to me."

Sen. Bill Cassidy (R-La.), who has previously supported ATVM, said he "wants to see what the state of play is" of the effort.

"They probably think that if the president is going to vitiate the CAFE standards, it’s less important," he said, referencing the administration’s proposal to roll back federal fuel economy rules.

"On the other hand, you can also argue that the reason for the initial federal funding is seed funding to ignite an industry, and arguably that has happened," he said.

Sen. Patrick Leahy (D-Vt.), the ranking member on the Appropriations Committee, did not dismiss the package yesterday. He said there would be a "period of negotiations" with Republicans about what cuts might be possible.

Sen. Gary Peters (D-Mich.), a supporter of the ATVM program that boosts Detroit automakers, said he was "concerned" about cutting the loan effort that continues attracting interest from the private sector. Still, he said, he would have to review the entire package before deciding whether to support it.

House conservatives who opposed the omnibus spending agreement also seem on board with the deal. Groups like the Club for Growth called it an "initial step" toward righting the nation’s fiscal course.

Congress now has 45 days — until June 23 — to approve the proposed spending clawbacks, otherwise the proposal will die and funding will be restored. House aides did not rule out the package moving through the chamber by the end of this month.

Among the other cuts in unobligated spending outlined in the 38-page proposal sent to Capitol Hill yesterday are: