White House races to wrap up rules before Trump exits 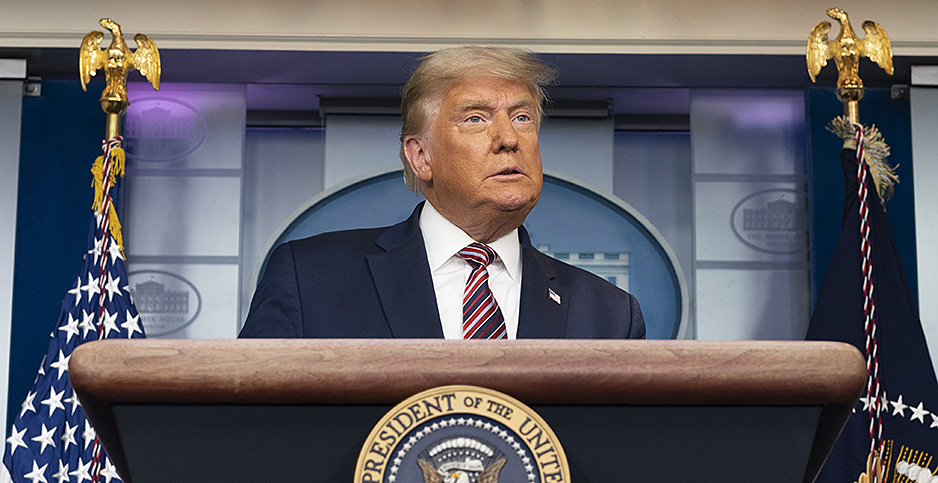 Now that President Trump has lost reelection, observers and advocates are bracing for agencies to finish a host of actions on energy and the environment.

Trump made deregulation a centerpiece of his 2016 campaign. Now the White House and political leaders at the different agencies have roughly two months to finish dismantling the regulatory state.

"I think it’s probably going to be an all-hands-on-deck to get as much accomplished as possible," said Nick Loris, an energy policy expert at the Heritage Foundation.

"Last-ditch efforts may already be underway to lock in the damage done over the past four years and preemptively hamstring sorely needed action to protect the environment and public health — they will not go unnoticed or unanswered," said State Energy & Environmental Impact Center Executive Director David Hayes, a former Obama administration official.

Analysts and observers expect EPA to speed up long-term priorities that could fundamentally change how future regulations are drafted, including a plan to restrict the use of scientific research. Another action would impose cost-benefit forecasting requirements for new air rules.

Last week, EPA sent a proposal to the White House Office of Information and Regulatory Affairs that would keep air quality standards for fine particulate matter in place through 2025. That acton will likely be finalized by Jan. 20.

The agency is working on a similar plan for ozone standards, though the agency may have a harder time wrapping up before the inauguration (Greenwire, Nov. 5).

At Interior, observers say proposals to weaken protections under the Endangered Species Act would be at the top of the list.

And even though a Biden administration might be able to reverse them, a rush of oil and gas lease sales — including a controversial one in Alaska — is also expected (see related story).

Preparations for a regulatory mad dash have been underway for months, said Earthjustice attorney Drew Caputo.

"I think we’re going to see a crash rear-guard effort by the Trump administration to do as much anti-environmental stuff before they have to turn out the lights," he said.

The regulatory rush will pay off, Loris said, should Republicans hold control of the Senate, where several races remain undecided. That’s because Democrats would have a harder time repealing Trump actions under the Congressional Review Act.

In 2017, the Trump administration and a GOP Congress used the statute to scrap more than a dozen Obama regulations, including a coal mining stream protection rule.

While environmentalists are bracing for a fast-paced two months, Richard Pierce, a George Washington University professor, said some Trump officials may buck their boss.

"There are a fair number of patriots who have been sticking around the administration thinking, ‘OK, I don’t like a lot of the things I’ll have to do, but at least I’m able to convince him not to do some of the worst things,’" Pierce said.

"Once he is a lame duck, [Trump] just isn’t going to be able to use his bullying tactics and firing threats as he had."

Even if the Trump team completes certain actions and publishes them in the Federal Register, the Biden team can halt implementation pending review.

"There is a lot of elbow room in terms of how long they change the effective date," noted Jim Tozzi, who helped launched OIRA under President Carter.

Tozzi, who has worked for five administrations, recalled that the idea of "midnight regulations" originated under Carter because his administration "dumped a hell of a lot of rules" after losing the White House to Republican Ronald Reagan.

"It got really big because President Carter was a Georgia peanut farmer, a Democrat, but his basic core was a little businessman, so he was really judicious," Tozzi said.

After Trump took office in 2017, the White House told agencies to review all published rules and hold actions pending publication.

EPA has 24 proposals under review at OIRA, according to the government database. That does not necessarily mean they will be finalized by Jan. 20.

Observers expect the agency to put considerable attention into the controversial "Strengthening Transparency in Regulatory Science" proposal, which former EPA chief Scott Pruitt identified as a critical priority in April 2018, when he vowed to eradicate "secret science" from EPA regulations (Greenwire, Sept. 15).

The proposal, under White House review, was expanded and modified under current EPA Administrator Andrew Wheeler and expected to be finalized by the end of the year.

Myron Ebell, director of the Center for Energy and Environment at the Competitive Enterprise Institute, who led the Trump EPA’s transition, said he’s also keen on new cost-benefit forecasting requirements for significant new Clean Air Act rules. The rule has been among the agency’s most contentious (E&E News PM, Oct. 16).

Focusing on cost-benefit analysis has been a priority of this administration. Last year, OIRA chief Paul Ray said the administration would "focus on structural changes to the rulemaking process, such as the memo issued in April that requires agencies to submit more cost data about their rules," according to Bloomberg.

Also at EPA, observers are awaiting the agency’s Lead and Copper Rule that has been stuck in White House review for 90 days.

The rulemaking became politically charged after the 2016 Flint, Mich., water crisis, and sources had suspected the administration might have been waiting for after the election to release the updated standards (Greenwire, Oct. 27).

At the Interior Department, there are six proposals pending White House review, but critics are eyeing as many as 70 proposed actions.

Aaron Weiss, deputy director for the left-leaning Center for Western Priorities, said that since January, Interior "has announced 90 policy initiatives mostly around increased oil development and weakened wildlife protections." Of those, 17 have been completed.

"[Interior] Secretary [David] Bernhardt stopped rolling out new policies leading up to the election because he knows his industry agenda is toxic to voters," Weiss wrote in an email before the election, adding that regardless of the outcome he expected to see "a barrage of awful policy changes."

One of those plans, issued in September, would restrict international student visas, which, if finalized, experts say could ultimately seriously weaken scientific research (Greenwire, Sept. 28).

Another Labor Department rule would seek to further rein in investments focused on environmental, social and governance concerns.

Despite the regulatory flurry, Cary Coglianese, a University of Pennsylvania professor, noted the Trump administration’s deregulatory profile means it will presumably have fewer midnight rules "if for no reason other than that they have fewer rules to impose."