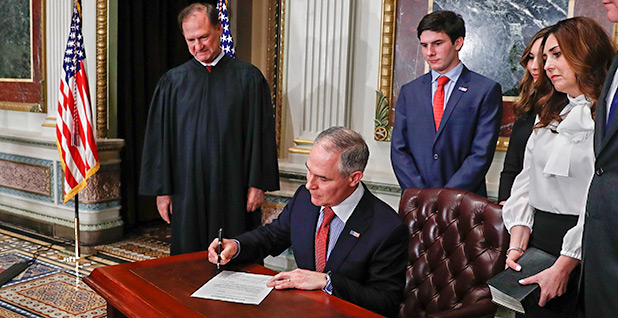 Supreme Court Justice Samuel Alito (left) watches as Scott Pruitt signs the affidavit of appointment after being sworn in as U.S. EPA administrator in the Eisenhower Executive Office Building on Friday. Photo by Carolyn Kaster, courtesy of AP Images.

U.S. EPA’s new administrator is expected to begin unraveling landmark climate policies in the opening days of his job while possible revelations loom around his connections to the fossil fuel industry.

Last week, as Administrator Scott Pruitt was weathering a tumultuous confirmation in the Senate, officials in the White House were reviewing an executive order that would begin the process of repealing the Clean Power Plan. The order also cancels the Climate Action Plan, the aspirational framework established by former President Obama to slash the nation’s emissions of greenhouse gases.

"It tells EPA and other agencies to start reviewing their actions that curtail energy production," said a source close to the administration.

The order does not cancel the Clean Power Plan outright but instead marks the first step in weakening the controversial climate rule, according to the source. Rumors circulated last week that President Trump and Pruitt would announce an executive order today, but it’s unclear if that will happen. Trump is not scheduled to visit the agency.

Pruitt’s first day follows comments he made over the weekend suggesting he questions EPA’s authority to regulate greenhouse gases. That seems to contradict statements he made during his confirmation hearing, in which he claimed to generally support the agency’s endangerment finding. EPA’s conclusion in 2009 that carbon dioxide endangers human health is the legal underpinning for regulating the gas.

Pruitt will be hosting a webcast "all-hands" meeting at noon today.

As the administration is working to fundamentally change the agency’s climate focus, Pruitt will also have to address a court order requiring him to release emails to oil, coal and natural gas companies. The Center for Media and Democracy won a court case last week in Oklahoma, compelling Pruitt to respond to nine outstanding open records requests.

"It’s disappointing that he didn’t choose to release those records, which was in his power," said Nick Surgey, research director at the Center for Media and Democracy. "I think the fear is that it will show what we have seen in the past that Pruitt has very deep ties to the oil and gas industry."

Pruitt has until the end of today to file an appeal of the court’s decision, or release the correspondence. Surgey said he anticipates receiving the first tranche of records today. Once that happens, the group plans to make them publicly available online as soon as possible. If Pruitt does not appeal the judge’s decision, the records could be available as early as tomorrow.

If Pruitt does appeal, he would have to offer specific exemptions explaining why he would not have to provide the emails. He would also have to hand over the emails to Oklahoma County District Judge Aletia Timmons, at which point the records would be reviewable by the Center for Media and Democracy’s legal counsel, according to Surgey.

The court ruling also requires Pruitt to release a second round of emails relating to five other open records requests by Feb. 27.

‘Get along’ with Pruitt

Even as Pruitt and his team of political appointees settle into the agency, career staff members will be working to prepare background materials and impress their incoming bosses. They may also be trying to move to different departments that don’t work as closely with appointed staff, according to a former deputy assistant administrator who worked for EPA for nearly 30 years. The source asked not to be named due to efforts to work with the incoming administrator.

The former official made such a move from the Office of Congressional Affairs, reporting directly to the assistant administrator to the policy unit in the Office of Enforcement and Compliance Assurance, during the early days under President Reagan’s controversial EPA head, Anne Gorsuch Burford.

"We heard a lot of scary things about her, and they were pretty much borne out," the source said. "I decided that I wouldn’t be happy working with them, I decided it wasn’t something that I was going to enjoy."

The source said it’s not clear under the current federal hiring freeze whether today’s staff could make similar moves within the agency.

"Every transition has people in some state of uncertainty and anxiety. It’s a somewhat fraught period even if it’s a friendly transition," the source said.

"It’s about protecting the progress we all worked so hard for, to make people’s lives better. The fate of EPA seems especially vulnerable, and those of us who worked there under Obama know how powerful a strong EPA can be," said Fried. "We aren’t going to be quiet about a serious threat to the integrity of an agency people’s health and lives depend on."

"There are some people in an organization of 15,000 who may feel like they need to assert their First Amendment rights and say critical things about the incoming administration," the former official said. "There hasn’t been a fight over an EPA administrator like that ever before. The priority should be getting along with Scott Pruitt and take his statements about improving the environment at face value."