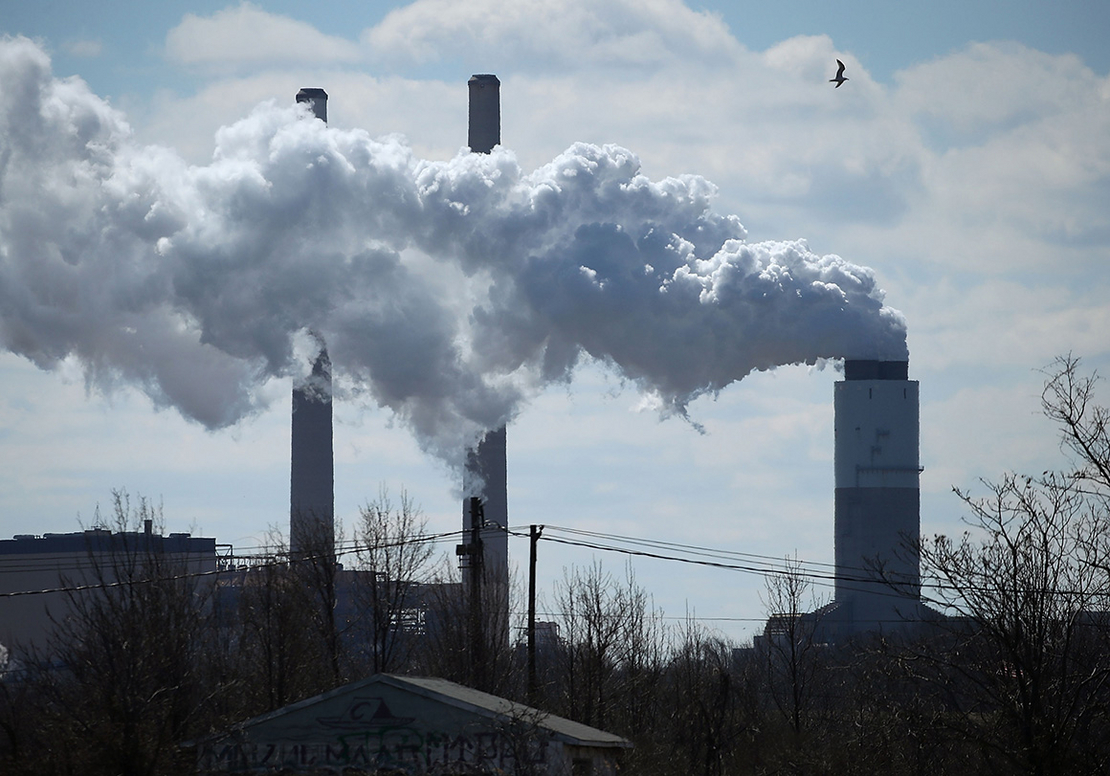 Emissions spewed from a large stack at the coal-fired Brandon Shores power plant in Baltimore on March 9, 2018. Photo by Mark Wilson/Getty Images

In one of his first executive orders last year, President Biden set a firm timetable for one top priority: By this past August, EPA was supposed to publish a proposed blueprint for undoing a particularly inflammatory Trump administration rollback that scrapped the legal basis for limits on power plant emissions of mercury, arsenic and other hazardous pollutants.

Instead, the agency only recently released its draft rule, and newly disclosed records suggest that a key White House office purposely sat on it long after a routine review had effectively ended.

“We don’t have any more comments,” Vlad Dorjets, an analyst in the Office of Information and Regulatory Affairs, told his EPA counterparts in an email last September as the assessment wound down. After saying he had moved to allow EPA’s policy office to upload clean versions of the final documents, Dorjets added: “In the meantime, I will check with my front office to make sure we have green light to conclude our review.”

But another four months passed before the regulations office, known as OIRA, sent the final draft back to EPA.

While administration officials have publicly offered no explanation for the unusual holdup, The New York Times last week cited unnamed sources who said the White House didn’t want to risk antagonizing industry and members of Congress by releasing the draft while trying to rally support for its “Build Back Better” climate and social spending bill.

Whatever the reason, one advocate expressed concern that the administration was manipulating a process designed to solicit feedback from other agencies on the draft.

“It was not an OIRA review by the book,” said Amit Narang, regulatory policy advocate for the liberal-leaning group Public Citizen.

Once OIRA officials conclude their appraisal of a rulemaking, he said, “they are supposed to allow the agency to publish it at their discretion.” In the intervening four months, Narang said, an official government website, Reginfo.gov, inaccurately showed that the proposed rule remained under review.

He said he saw similarities to the Trump administration’s 2018 handling of an equally controversial plan to limit EPA’s use of science that was pushed through OIRA in a few days so that then-EPA Administrator Scott Pruitt could unveil it at an event with members of Congress (Greenwire, April 27, 2018).

The recently released Biden administration proposal would restore the finding — revoked two years ago — that it is “appropriate and necessary” to regulate hazardous air pollutants from coal- and oil-fired power plants (E&E News PM, Jan. 31).

Because the power industry has continued to comply with what are formally known as the Mercury and Air Toxics Standards, the delay had no immediate practical effect.

But in the interim, the standards, which rank among the most consequential Clean Air Act rules in EPA history, lack the legal foundation required for their existence. A pending lawsuit by a Colorado-based coal company seeks to void the emissions limits by targeting that vulnerability (Greenwire, Aug. 24, 2020).

The practical impact would come “if this administration could not finalize its rule and defend it in court before its term or terms end,” said John Walke, clean air director for the Natural Resources Defense Council, who could not recall a comparable circumstance.

“I cannot think of an example that OIRA completed its review many months prior and the EPA rulemaking just sat there,” Walke said.

The proposed rule was published yesterday in the Federal Register, opening a 60-day public comment period. Following standard practice, Dorjets’ email was among a trove of documents from the OIRA review also added to the online regulatory docket.

Dorjets, who lists his title as senior policy analyst and deputy branch chief, did not reply to messages sent yesterday via email and LinkedIn seeking more information on the reason for the delay.

Press aides at the White House Office of Management and Budget, which encompasses OIRA, also did not respond to an email, nor did Vedant Patel, a spokesperson for the White House proper when asked whether considerations over the “Build Back Better “legislation were the reason for keeping the proposed rule under wraps after the review was completed.

If the White House’s strategy was in fact to avoid raising the hackles of such influential lawmakers as Senate Energy and Natural Resources Chair Joe Manchin (D-W.Va.), who previously opposed MATS, it proved ineffective in winning their support. Manchin, who has voiced a variety of objections to the bill, declared it “dead” earlier this month.

The Trump-era MATS rollback was one of a handful singled out for special notice in Biden’s January 2021 executive order, which instructed EPA to publish a proposal “suspending, revising or rescinding” it by last August. The agency, however, sent its pre-publication draft to OIRA only that month, meaning that the timetable had already slipped.

The documents released yesterday suggest that the ensuing review was uneventful, with other agencies offering relatively minor changes. There is no indication of further substantive action on the proposal after September.

Cary Coglianese, an administrative law professor at the University of Pennsylvania, said he was not directly familiar with the rulemaking but that it would not be surprising if different parts of the administration had collaborated.

Evidence suggests, however, that EPA officials were initially blindsided by the prolonged OIRA hold.

Three days after Dorjets’ email, for example, acting EPA air chief Joe Goffman joined in a Sept. 24 virtual meeting titled “MATS Rollout Discussion,” according to a copy of his work calendar obtained under the Freedom of Information Act.

Paul Miller, executive director of the Northeast States for Coordinated Air Use Management, a Boston-based regulatory consortium, recalled hearing Goffman say last fall that officials wanted to make sure that the proposed rule was bullet-proof and “legally sound in every way.”

“That sounds plausible,” Miller said, “but he also said that it was coming soon, and that was back in October.”

Neither Goffman nor EPA press aides replied to an emailed request for comment sent late yesterday. A virtual public hearing on the proposed rule is scheduled for Feb. 24; EPA hopes to issue the final version by this September.