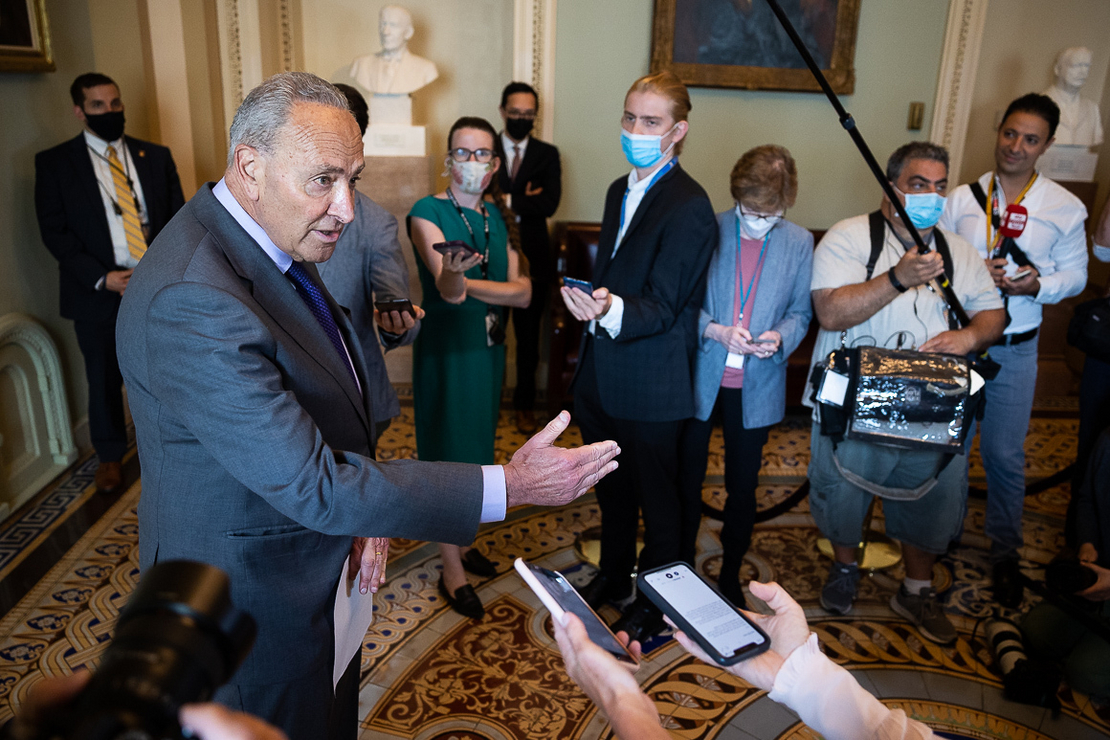 The Senate will vote this evening on a motion to proceed to consideration of a bipartisan infrastructure package.

“I’ve said for weeks that we intend to do two things in July: One, a bipartisan infrastructure bill, and two, a budget resolution with reconciliation instructions,” said Senate Majority Leader Chuck Schumer (D-N.Y.) in a brief statement to the press this afternoon.

“Tonight, I am intending to call a vote to move to proceed to the bipartisan infrastructure bill," he said. "I believe we have the votes for that. And then we will proceed to do amendments and go forward on that bill.”

Shortly after Schumer’s remarks, the White House sent out a fact sheet on the framework with dollar amounts for various line items. President Biden told reporters he felt “confident” about its prospects on Capitol Hill. However, the final text has yet to be completed, and there is little certainty about how the process will play out in the coming days.

Republicans filed out of a closed-door meeting earlier today with binders containing roughly 30 pages of summary of a $550 billion bill, negotiated between a bipartisan group of senators and Biden, that will round out to at least 700 pages.

Lawmakers made clear that they had yet to fully review the details and that there were still many questions that had to be answered before they could commit to whether to vote on the motion to proceed that was scheduled to take place in just a matter of hours.

Senate Energy and Natural Resources ranking member John Barrasso (R-Wyo.) said he would be a "no" tonight, while Sen. John Kennedy (R-La.) said Schumer was "walking around like a fox on fire."

Kennedy criticized Schumer for "saying that, you know, ‘You got the bill, we need to vote immediately.’ Well, we don’t have the bill. It’s still being drafted. We don’t have a [Congressional Budget Office] score. We don’t know whether there’s going to be an amendment process."

Sen. Mike Braun (R-Ind.) said he expected there was enough GOP support right now to at least clear the 60-vote threshold needed to agree to the procedural motion, considering there were 11 Republicans on the negotiating team signing off on the deal. Other Senate Republicans also said they were looking forward to voting “yes,” including South Carolina’s Lindsey Graham and North Dakota’s Kevin Cramer.

To Kennedy’s point, there are lingering disputes — on both sides of the aisle — that could slow the process considerably or even grind it to a halt. Cramer and Sen. Tom Carper (D-Del.), chairman of the Senate Environment and Public Works Committee, cited continued disagreements about water infrastructure funding.

“There was $6 billion in grant programs for poor communities to have money for water, wastewater, drinking water, and we need to restore it,” Carper explained, referencing a provision in the $35 billion Senate-passed water infrastructure bill, S.914, that was left out of the bipartisan deal.

Carper also said the agreement does not do enough on climate: “Do we need to do more? Yes. Can we and will we? Yes.”

Braun, meanwhile, said he was personally skeptical about the lack of “conventional pay-fors” based on what he gathered from the Republican meeting and the summary packet, which might have included taxing electric vehicles and imposing taxes on diesel and gas.

Ultimately, as Sen. Susan Collins (R-Maine), a bill negotiator, told reporters after the meeting, “It’s not over till it’s over.”

According to the White House fact sheet, the deal will reauthorize surface transportation programs for five years, including $110 billion for roads, bridges and major infrastructure projects.

Of that amount, $40 billion would be dedicated to bridges, while $17.5 billion would be set aside for major projects that are “too large or complex for traditional funding programs but will deliver significant economic benefits to communities.”

It would steer $39 billion toward transit — a sticking point in recent days but an amount the White House said represents the largest federal investment in transit ever. Rail would receive $66 billion, while electric vehicle infrastructure would see $7.5 billion.

On water, the deal would invest $55 billion total, including dedicating funding to replace lead service lines and address contamination from per- and polyfluoroalkyl substances (PFAS).

Negotiators also agreed to spend $50 billion on boosting the resilience of infrastructure to climate change and cyberattacks, including funds to protect against droughts and floods.

The bill will devote $73 billion to upgrading power infrastructure, which the White House says will build thousands of miles of new transmission lines. It would create a new Grid Deployment Authority, invest in research into advanced transmission technologies and promote smart grids. The deal would also fund demonstration projects and research hubs into next generation technologies like advanced reactors, carbon capture and hydrogen.

It would spend $21 billion on environmental remediation, including Superfund and brownfields sites, reclaiming abandoned mines, and capping orphan wells.