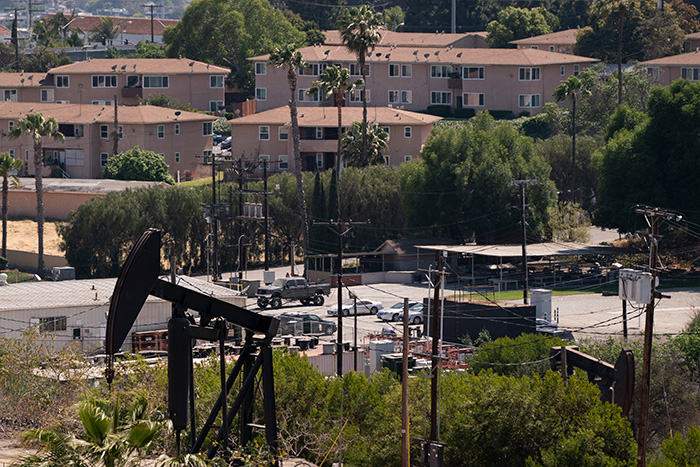 Apartment buildings are seen behind pumpjacks at the Inglewood Oil Field in Los Angeles in May. AP Photo/Jae C. Hong

The White House Council on Environmental Quality will release a preliminary mapping tool this morning aimed at identifying communities across the country that would be eligible for federal investment under President Biden’s flagship environmental justice initiative.

The draft Climate and Economic Justice Screening Tool zeroes in on census tracts that are both low-income and at risk from climate change, pollution or underinvestment. The locations could be the beneficiaries of Biden’s promise to channel 40 percent of climate and clean energy investment to disadvantaged communities.

The tool, developed by CEQ and the U.S. Digital Service, has already come under fire from some environmental justice experts because it does not explicitly use race as an indicator. But CEQ officials told reporters on a virtual briefing yesterday that the decision to target economic and environmental characteristics instead is one way to “ensure that this tool is built to withstand potential legal challenges.”

Republican governors and members of Congress have been critical of Biden’s Justice40 commitment, especially as it relates to how money would be spent under last year’s bipartisan infrastructure law. Some governors have insisted that the Biden administration defer to states on how those dollars would be spent, rather than seeking to impose climate and environmental justice priorities on the funds.

CEQ officials said they were unaware of any planned litigation regarding Justice40. And they predicted that state governments would find the screening tool useful.

“I think what we’re hoping is that people will explore the tool, give us feedback on it, and then help to build a tool that reflects the realities in their own states,” said one official. “That it’s not a political lens they’ll be applying to it.”

CEQ stressed that the tool was built to incorporate recommendations from the White House Environmental Justice Advisory Council — an outside body of experts on the role race plays in climate and environmental disparities. The tool is being released in a beta form with a 60-day public comment period beginning today.