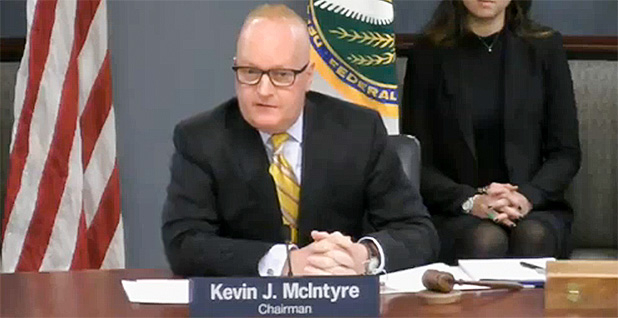 The White House has for some time been vetting candidates to fill a vacancy on the Federal Energy Regulatory Commission that emerged following the death of Republican Commissioner Kevin McIntyre, according to several sources.

Some say a nominee could emerge within weeks.

McIntyre, 58, died Wednesday after a long struggle stemming from a 2017 diagnosis of brain cancer and subsequent surgery (Energywire, Jan. 3).

His illness had left him unable to participate in FERC deliberations for the past few months. McIntyre last voted on a docket item on Oct. 16.

That leaves the commission with four members — Chairman Neil Chatterjee and Bernard McNamee, who are both Republicans, and Democrats Cheryl LaFleur and Richard Glick.

McNamee joined the commission Dec. 11 and abstained from voting at the FERC December meeting.

That 2-2 alignment could perpetuate "the possibility that policy disagreements could inhibit the ability of the Commission to move forward if it deadlocks on partisan lines" on cases involving liquefied natural gas terminals and natural gas pipelines and potentially on orders that impact the fuel mix of the electric generation sector, ClearView Energy Partners LLC said in a note to clients yesterday.

"We believe that Senate Energy Chairman Lisa Murkowski (R-Alaska) and Senate Majority Leader Mitch McConnell (R-Kentucky) could move a nominee for that seat through the confirmation process quickly (within weeks); however, they cannot act until the White House vets and nominates a candidate," ClearView said.

The White House could nominate a replacement for McIntyre only or pair that nominee with a renomination of LaFleur, whose term expires June 30, or another Democrat.

Until a nominee is seated at FERC, "McIntyre’s passing will put Chairman Chatterjee’s consensus-building skills to the test as he seeks to issue orders on several hot issues, including the pending PJM capacity market proceedings and pipeline matters," said John Moore, director of the Sustainable FERC Project at the Natural Resources Defense Council.

He praised McIntyre’s "steady hand" and emphasis on preserving open electricity markets and maintaining the independence of the commission.

"As we look to the future, we urge Congress, the administration and the commission itself to preserve both the spirit and letter of fairness and evenhandedness that marked Chairman McIntyre’s tenure," Moore said.

One longtime FERC observer said, "FERC desperately needs a competent state commissioner with a strong legal and policy background who knows how to build solid positions and regulations that are consistent with the laws, public interest and common sense."

For the first time in many years, the commission has no member with experience serving as a state energy regulator. Thirteen of the past 23 FERC appointees came from state commissions.

The National Association of Regulatory Utility Commissioners had lobbied for a person with such qualifications after Commissioner Robert Powelson, a former Pennsylvania regulator, resigned in August. The Trump administration instead chose McNamee, a political appointee at the Department of Energy.

Nick Wagner, NARUC president and member of the Iowa Utilities Board, said McIntyre "conveyed his positions and those of FERC with the utmost professionalism" and sought out the views of state regulators "as he understood the value of stakeholder participation."

Susan Tierney, senior adviser at the consulting firm Analysis Group, commended McIntyre for "leading the agency with grace" and navigating "to find common ground among commissioners with different points of view."

"But it is especially sad for the nation at a time when wise administrative stewardship in the federal government is so important. I hope that the Administration finds another person with the kind of dignity and respect for agency integrity that Kevin showed," Tierney said.

Family extends thanks to FERC staff

In a statement, McIntyre’s spouse, Jennifer, and their children thanked FERC staff for "their faithful support of Kevin during his time at the Commission, especially in the last few months."

McIntyre "often said that being Chairman of FERC was his ‘dream job’" and that "he was always energized by the challenge of leading the agency ‘full steam ahead,’ even when his health faltered," the statement said. "We will always be grateful for the opportunity, however brief, that Kevin had to serve our country as FERC Chairman."

Chatterjee said: "During his tenure at the commission, Kevin exhibited strong leadership and an unmatched knowledge of energy policy and the rule of law. He exemplified what it means to be a true public servant each and every day."

LaFleur expressed her appreciation for McIntyre’s "keen legal judgment, unstinting commitment to the rule of law and deep concern for the organization even in the face of his personal struggles."

Glick reflected on getting to know McIntyre during their Senate confirmation process.

"It did not take long to recognize that Kevin was a man of great intellect and principle. He brought both qualities to the Federal Energy Regulatory Commission where, as chair, he guided the commission to bipartisan consensus during a particularly tumultuous time," Glick said.

Colette Honorable, who served on FERC from 2015 to 2017, said McIntyre was "very well-respected and someone who clearly brought people together."

"I hope that people will not focus so much on the fact that he may had had the briefest tenure at FERC but more on his leadership at a pivotal time in FERC’s history," Honorable said.

"At a time when we needed it most, FERC demonstrated its independence from other federal entities and influences, and that was very important to instill certainty and confidence in the commission," she said, referring to McIntyre’s first major decision in which he forged a unanimous commission rejection of a request by the Department of Energy to change electricity market rules to effectively subsidize money-losing coal and nuclear plants.

Former Commissioner Don Santa, who is president and CEO of the Interstate Natural Gas Association of America, said McIntyre "demonstrated his commitment to the role of the commission as an independent agency charged with ensuring that our nation has reliable energy infrastructure and well-functioning wholesale energy markets, all while respecting the views of the many stakeholders affected by matters within FERC’s jurisdiction."

Nora Brownell, also a former FERC commissioner, saluted McIntyre’s "enormous courage, integrity and independence. I hope the administration and Congress respect that. I think they should pair two appointments to ensure that respect," she said.

McIntyre made a difference in his brief tenure, saving "consumers and the economy millions" and working to reframe natural gas policy "to reflect changing realities," Brownell said.