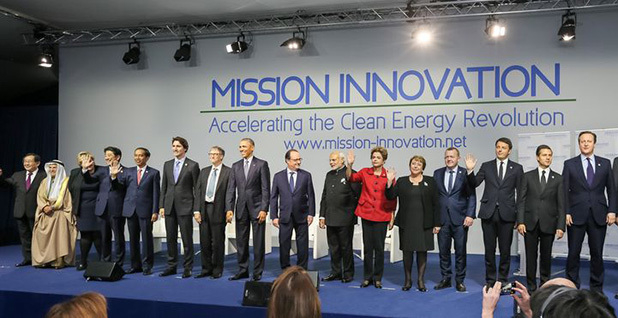 President Obama, the leaders of 19 other countries and Microsoft co-founder Bill Gates announced in Paris last year sweeping national agreements to double research and development funding for clean energy. This weekend, Obama worked to make good on that promise, announcing he will seek $12.8 billion for such research in the fiscal 2017 budget. Photo courtesy of Wikipedia.

President Obama has announced an ambitious plan to double federal research and development funding for climate change-fighting energy research to nearly $13 billion over the next five years.

The announcement is a fulfillment of a commitment under the Mission Innovation agreement forged late last year during the Paris climate talks. Twenty countries signed onto the deal, which calls for members to double their investments in clean energy innovation.

"Rather than subsidize the past, we should invest in the future," Obama said in a video released this weekend. "This will include new investments to help the private sector create more jobs faster, lower the cost of clean energy faster and help clean, renewable power outcompete dirty fuels in every state."

The proposal comes as Obama prepares this week to release his funding request for fiscal 2017, the final budget of his term. Mission Innovation stands to be one of Obama’s most significant efforts in the fight against climate change before he leaves office, and the push for more research carries the hope of bipartisan agreement in a contentious budget process.

While initiatives like the Clean Power Plan and energy efficiency standards stand to curb greenhouse gas emissions, many experts argue that the world needs new technologies to push the needle back in the other direction and avoid catastrophic warming.

"This policy framework is very important, but it’s not enough to hit the targets we’ve set globally on climate change," said Paul Bodnar, senior director for energy and climate change at the National Security Council, during a conference call with reporters. "The president’s budget is a key component of making that a reality."

Under this initiative, the United States would lead the world by example and ramp up energy research funding from the current $6.8 billion to $12.8 billion by fiscal 2021. The budget request for fiscal 2017 will call for $7.7 billion across 12 agencies.

The Department of Energy would get about 80 percent of the Mission Innovation investment, including $1.8 billion for fundamental science research in energy production, conversion, storage and its effects on climate change.

DOE would also get $880 million for affordable advanced vehicles, $804 million for nuclear energy research and $500 million to drive deployment of wind, solar, geothermal and water-based energy.

"I think the important thing you will hear from folks is that there is no energy source that is necessarily going to be a winner," said Ali Zaidi, associate director for natural resources, energy and science at the White House Office of Management and Budget.

Some GOP support, with caveats

Last week, DOE also announced $20 million in funding for its Technology Commercialization Fund (TCF), which aims to drag discoveries languishing in national laboratories out into the marketplace where they could make a dent in greenhouse gas emissions. The fund will be used to match private investments in these technologies.

"While originally established by the Energy Policy Act of 2005, the TCF also complements DOE’s efforts within Mission Innovation," DOE wrote in a release.

White House officials were optimistic about securing funding increases in the budget, citing bipartisan budget deals struck last year that increased energy research funding. "The exciting thing for us is there is a lot of support for this," Zaidi said.

However, White House officials were mum about what concessions they are willing to make to gain support for Mission Innovation. Sen. Lamar Alexander (R-Tenn.) suggested earlier this year that he would be willing to support more energy research and development at the expense of clean energy subsidies like the production tax credit for wind power (ClimateWire, Jan. 13).

"Sen. Alexander has long supported doubling funding for basic energy research and looks forward to reviewing this proposal," said Jim Jeffries, a spokesman for the senator, in an email.

"It’s absolutely a step in the right direction," said Rob Atkinson, president of the Information Technology and Innovation Foundation think tank. "A commitment to double clean energy research and development, if it happens, is a very sizable advance in driving clean energy."

Though Mission Innovation has a parallel private consortium investing in clean energy, the Breakthrough Energy Coalition, Atkinson said that it remains crucial for the government to step in to support early-stage research where many private interests are too cautious to invest.

"In terms of [funding] clean energy technology, I actually think it’s better to have it be the public sector at this point in time," he said. "The core of meeting the challenge has to be the discovery of new knowledge."

As for trading off between energy research and energy deployment, Atkinson came in favor of the research side of the balance. "The reality is that that’s the best we’re going to get," he said. "It’s really, really hard to imagine a scenario where we’re going to do both."

This view counters a growing chorus of researchers who are arguing that the United States and many countries in the world could feasibly decarbonize their energy systems using only the technology available today (ClimateWire, Jan. 26). The only things missing are the political will and investment, according to these scientists.

Paul Bledsoe, a former Clinton White House energy and climate aide and a spokesman for the American Energy Innovation Council, said that lawmakers are nonetheless pushing for inventing better solar panels and wind turbines, as well as getting more of the current crop of renewables out in fields and rooftops.

"I think there’s a recognition that both [research and deployment] are needed," he said.

As for the Mission Innovation’s chances in Congress, Bledsoe shared the White House’s optimism for securing more investment in energy research. "I think that the president’s budget proposal is going to meet a more positive reception on this than in past years," he said.