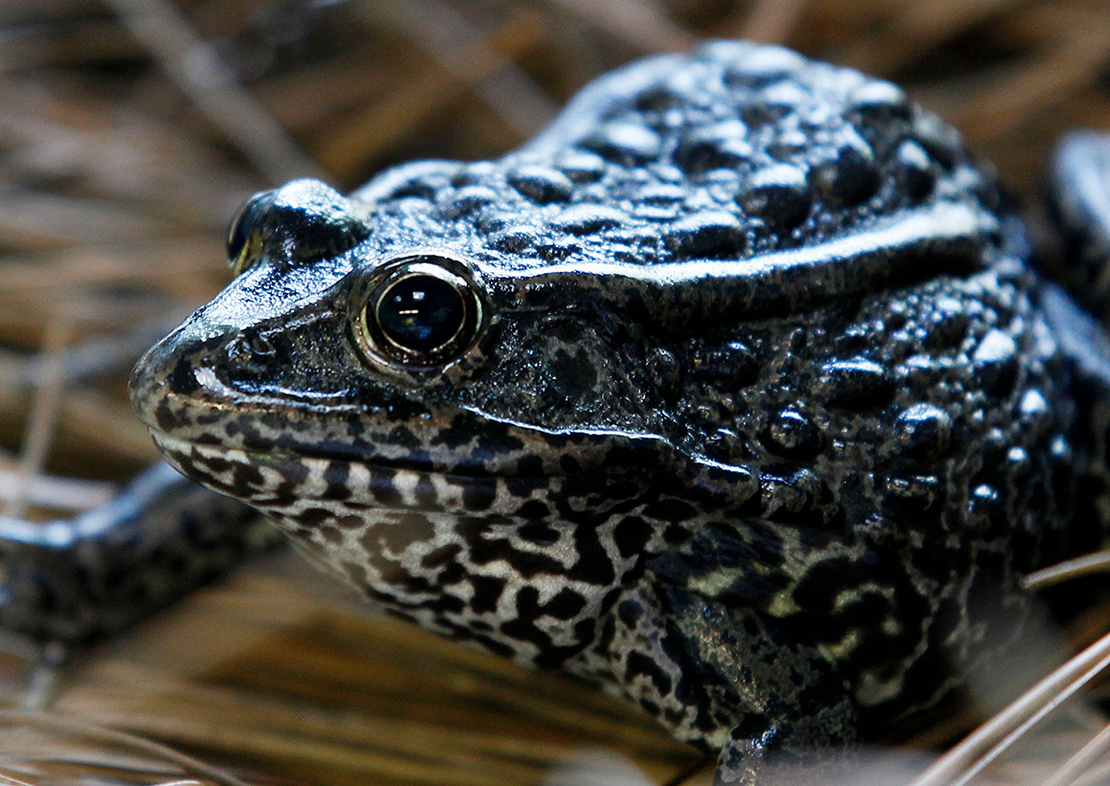 A dusky gopher frog at the Audubon Zoo in New Orleans. Potential habitat for the frog became a legal battle that rose all the way to the Supreme Court, but the case was settled without resolving key questions over how "habitat" should be defined in the law. Gerald Herbert/AP Photo

The Fish and Wildlife Service this week stepped closer toward erasing a Trump administration rule that crimped the Endangered Species Act’s definition of “critical habitat.”

On Tuesday, records show, the federal agency, along with NOAA Fisheries, submitted a long-awaited ESA rule for final White House review. Once the Office of Information and Regulatory Affairs has done its thing, it will be go time for one of the environmental community’s priorities.

“The Endangered Species Act has saved hundreds of irreplaceable plants and animals from extinction, but it could be doing so much more good,” Stephanie Kurose, a senior policy specialist at the Center for Biological Diversity, said in a statement.

Kurose added that “despite the law’s remarkable success, the services have been reluctant to fully implement it, succumbing to years of political and industry pressure to weaken what is the only hope for imperiled species.”

On Tuesday, the same day the federal agencies handed the ball to White House reviewers, the Center for Biological Diversity filed a sweeping petition urging FWS and NOAA Fisheries to take a variety of actions.

The petition, according to the environmental group, “calls on the services to holistically address the threat of climate change, reduce illegal political interference that undermines scientific integrity, strengthen law enforcement and add new measures to ensure accountability for extractive industries that harm the habitats of endangered species.”

The proposed federal rule now at the White House, while significant, is considerably more focused than that broad call for action.

Instead, it would cancel the Trump administration’s December 2020 final rule adding a definition of the term “habitat” to the existing ESA regulations.

That new rule, for the first time, stated that “for the purposes of designating critical habitat, habitat is the abiotic and biotic setting that currently or periodically contains the resources and conditions necessary to support one or more life processes of a species.”

Any federal agency seeking to authorize, fund or carry out an action on designated land must first consult with FWS to ensure the action is not likely to destroy or damage a critical habitat. But, as the Supreme Court noted, the term “habitat” had not been itself defined, leading to regulatory ambiguity.

In 2012, FWS included more than 1,500 acres of private land in Louisiana in its designation of critical habitat for the dusky gopher frog. The frog used to live throughout coastal Alabama, Louisiana and Mississippi, but most individuals now inhabit a single pond in Mississippi.

The Louisiana landowners argued that their 1,544 acres shouldn’t qualify as critical habitat because the land would need restoration to be useful. In a 2018 decision, Chief Justice John Roberts observed that the ESA does not provide a “baseline definition” of habitat.

“It identifies only certain areas that are indispensable to the conservation of the endangered species,” Roberts wrote. “The definition allows the [Interior] Secretary to identify the subset of habitat that is critical, but leaves the larger category of habitat undefined.”

The federal government and the landowners in the case subsequently reached a settlement and left unresolved questions over how “habitat” should be defined in the law (Greenwire, Nov. 27, 2018).

FWS said last year it had determined that the subsequent Trump-era definition would “inappropriately constrain the Services’ ability to designate areas that meet the definition of “critical habitat” under the law.

“This [Trump administration] definition of ‘habitat’ excludes areas that do not currently or periodically contain the requisite resources and conditions, even if such areas could meet this requirement in the future after restoration activities or other changes occur,” the agency explained last year.

FWS added that the “attempt to codify a single, one-size-fits-all definition of ‘habitat’ … was one that neither stemmed from the scientific literature nor had a clear relationship with the statutory definition of ‘critical habitat.’”

FWS subsequently received nearly 13,000 public comments on the critical habit definition issue, many of them identical.

“The [Trump rule] to narrowly limit the definition of ‘habitat’ to only areas that currently can support individuals of an imperiled species represents a 180-degree reversal of past agency practice,” Earthjustice wrote.

The environmental group, writing on behalf of itself and other organizations, added that “for decades, the Services have designated critical habitat in unoccupied areas that were not, at the time, habitable for the listed species, but were nonetheless deemed essential for conservation.”

Others have urged retention of the Trump administration’s definition.

“Given the significant scientific uncertainty with many listed species and the ecosystems in which they reside and the failure of the ESA regulators to look at the many varied stressors affecting them, the agencies need to step back and rethink the consequences of their actions,” the Family Farm Alliance wrote.

On a related front, the ESA further states that critical habitat is to be designated “on the basis of the best scientific data available and after taking into consideration the economic impact, the impact on national security, and any other relevant impact.”

A Trump-era rule allowed that “other relevant impacts” may be considered, including public health and safety and risk of wildfire or pest and invasive species management (Greenwire, Dec. 17, 2020).

FWS is working to reverse this rule, as well.