White House to roll out ‘climate framework.’ Here’s what we know 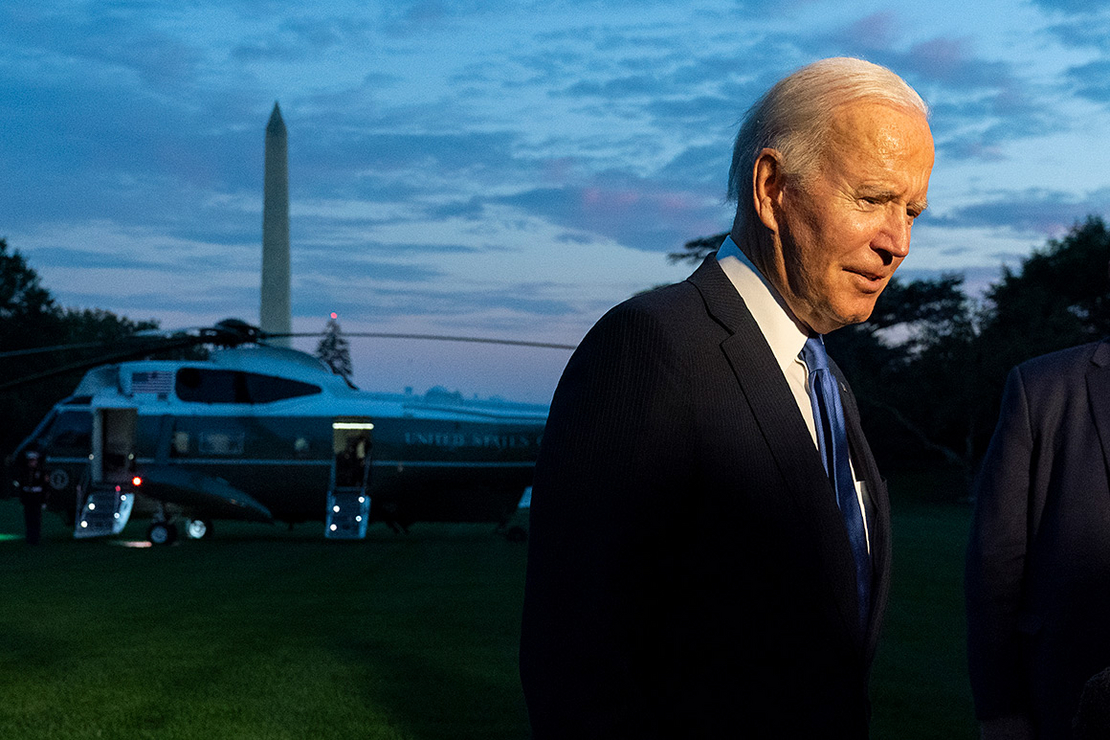 President Biden speaks to reporters on the South Lawn last week. The White House is working behind the scenes to map out U.S. emissions reductions before climate talks next month. AP Photo/Manuel Balce Ceneta

The White House is poised to reveal a trove of information about U.S. climate progress ahead of global talks in two weeks, but it’s unclear whether it will include a detailed road map for halving emissions by 2030.

Staff with climate envoy John Kerry and the White House National Security Council told environmental advocates yesterday that the U.S. would send two overdue reports to the U.N. that outline White House decisions on emissions, climate finance and other issues. The reports, known as the "national communication" and the biennial report, were not issued during the Trump administration and are overdue.

The U.S. is also expected to provide details about the financial assistance it will provide to poor countries in the coming two years to help them cut greenhouse gas emissions and shore up their defenses to climate change (see related story). And it will issue a new report, known under the Paris Agreement as its "long-term strategy," which lays out in general terms how it plans to zero out emissions by 2050.

The Obama administration unveiled a 2050 strategy in its final months, providing a blueprint for how the U.S. could cut emissions 80 percent below 2005 levels by 2050. But the Biden administration has embraced a zero-emissions-by-2050 commitment in line with what scientists say is required to avoid the worst impacts of climate change.

The White House is also drafting a "framework" for how the U.S. would meet Biden’s commitment to cut emissions 50 to 52 percent below 2005 levels by 2030. But it’s unclear if the document, which has been described by sources, will be released before negotiators meet in Glasgow, Scotland.

Climate adviser Gina McCarthy is taking the lead in developing that strategy. Yesterday the National Climate Task Force she chairs unveiled a website celebrating the actions the Biden administration has taken in the last 10 months to rein in emissions or improve adaptation and global outreach.

With Congress still debating climate legislation that could shape how, or if, the U.S. reaches the 2030 goal, some advocates say the administration might wait to reveal the framework until early next year.

But others say that Biden should provide more details on how the U.S. will meet the emissions commitment he rolled out five months ago, particularly after his climate envoy has spent the year pressing other countries to ante up ambition ahead of the conference.

“John Kerry can’t go to Glasgow without some document that says ‘here’s how we’re going to do 50 percent,’” said Robert Perciasepe, a senior adviser at the Center for Climate and Energy Solutions and a former deputy EPA administrator under Obama. “So they’re going to do that.”

Perciasepe said the administration would likely include efforts to expand natural carbon sinks, the next generation of regulations for vehicle emissions, and the likelihood of new clean energy and electric vehicle tax credits.

He does not expect the White House to announce a new rule akin to the Obama-era Clean Power Plan, which tried to cut emissions across the electrical system. But he does anticipate that EPA will offer new strategies for encouraging the retirement of coal-fired power, the retention of nuclear energy, and the realization of Biden’s commitment to a zero-carbon power grid by 2035.

EPA is also set to propose rules for limiting methane from for oil and gas facilities. Any announcement would likely come before Biden leaves for the Group of 20 summit in Italy on Oct. 29. He’s scheduled to travel to the climate talks from Italy.

If the House and Senate pare down their ambitious climate legislation — as appears likely — Perciasepe said the White House could seek to counter the perception that its climate agenda was failing by highlighting other progress.

“But then to be credible in Glasgow, they have to have some document, some report, something that they can point to and say, look, we have analyzed this,” he said.

McCarthy and her team have spent months working with federal agencies on Biden’s climate commitment.

Jake Schmidt, the international climate director for the Natural Resources Defense Council, said the nationally determined contribution to the Paris Agreement would have been the product of an interagency process that worked its way up from technical staff to deputies to principals before the White House decided on the goal of 50 to 52 percent.

Schmidt said the White House might provide more details about how it plans to reach its goal if the sprawling climate and spending bill Democrats are trying to move through budget reconciliation looks unlikely to succeed.

“My guess is there’s a lot in their pocket that they’re preparing. But given the status of stuff, they’re preparing it and they’ll decide whether or not they need to pull something out or not,” he said.

Kevin Book, who heads the research team at ClearView Energy Partners LLC, said the White House strategy is likely to be wide-ranging.

“When you’re a hammer, everything looks like a nail,” he said. “We’ve been looking at it and thinking: What’s not in it?”

The White House’s move to revise National Environmental Policy Act regulations to elevate climate change in federal rulemaking, plus its road map on climate-proofing the economy and federal procurement guidelines would all be components of the 2030 strategy, he said.

He also noted that McCarthy met with officials from numerous states this week, and the administration is likely to tout subnational action as part of meeting its commitment.