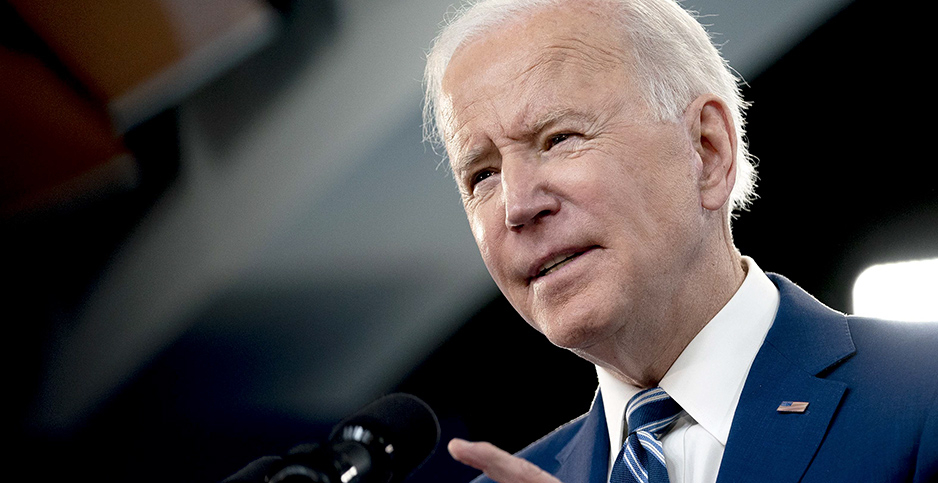 President Biden later today will outline an ambitious, multitrillion-dollar infrastructure and jobs plan that proposes unprecedented investments in clean energy and combating climate change to be paid for in part by ending fossil fuel tax breaks.

The legislation is the first phase of Biden’s "Build Back Better" initiative and proposes $2.25 trillion in spending over the next eight years, with $620 billion for roads, bridges, rail and other transportation infrastructure.

The proposal also includes $650 billion for housing; $400 billion in community improvements for the elderly, disabled and disadvantaged; and $580 billion for domestic research and development and manufacturing expansions, a senior administration official said yesterday.

Biden wants to pay for the plan by raising $2 trillion in taxes over the next 15 years, in part by eliminating about half of the Republicans’ 2017 corporate tax rate cut. The president is also seeking to end all breaks for fossil fuel companies.

Biden is expected to detail the package this afternoon in Pittsburgh, a location selected for the city’s strong union ties and its track record in manufacturing.

"The American jobs plan is really about focusing on how we can make a historic capital investment in America, to improve our competitiveness, create millions of jobs, rebuild our infrastructure … and finally address the climate crisis as a nation," said the official.

The proposal represents the most ambitious spending effort since President Lyndon B. Johnson’s Great Society program in the 1960s.

Documents provided by the administration offered some of the details of the legislation dubbed, the "American Jobs Plan." Some tax proposals fall under the "Made in America Tax Plan."

Biden is not expected to outline a path forward in Congress, but he’ll continue to press for bipartisan support. Lawmakers have already been releasing infrastructure proposals in anticipation of Biden’s push.

Central to the White House’s push is a $100 billion investment in clean energy production and related infrastructure.

The proposal includes a 10-year extension of renewable energy tax credits, an expansion of credits for energy storage and a beefing up of the carbon capture tax incentive.

That strategy goes further than House Democrats’ plans for clean energy credits, which would only extend investment and production incentives for an additional five years.

"The President’s plan will create a more resilient grid, lower energy bills for middle class Americans, improve air quality and public health outcomes, and create good jobs, with a choice to join a union, on the path to achieving 100 percent carbon-free electricity by 2035," the plan says.

The strategy includes a tax credit targeting high-voltage transmission deployment as a means to incentivize "the buildout of at least 20 gigawatts of high-voltage capacity power lines and mobilizes tens of billions in private capital off the sidelines — right away."

The Department of Energy, under the Biden plan, would establish a new Grid Deployment Authority to better utilize existing transmission siting authorities.

The president would offer point-of-sale rebates for electric vehicles. Those rebates would allow more people to fully take advantage of EV incentives.

There’s also a proposed grant program for state and local governments to build out a nationwide network of 500,000 EV chargers by 2030.

The plan would direct the federal government to use its purchasing power to help stimulate EV and clean energy deployment. Notably, it would electrify U.S. Postal Service vehicles and the rest of the federal fleet as part of those ambitions.

The plan includes a broad focus on climate resilience, calling on Congress "to invest in protection from extreme wildfires, coastal resilience to sea-level rise and hurricanes, support for agricultural resources management and climate-smart technologies, and the protection and restoration of major land and water resources like Florida’s Everglades and the Great Lakes."

The clean energy push also includes a call for drastic down payment on DOE research and development. The plan calls for a $40 billion investment in infrastructure improvements across DOE’s 17 national labs. That number echoes a proposal pitched by Sen. Ben Ray Luján (D-N.M.) when he was in the House last Congress.

"In order to win the 21st century economy, President Biden believes America must get back to investing in the researchers, laboratories, and universities across our nation," the fact sheet says. "But this time, we must do so with a commitment to lifting up workers and regions who were left out of past investments."

National lab infrastructure has started to show its age over the past decade, especially when much of it dates back to the Manhattan Project. That has prompted concern from lawmakers about the labs’ ability to attract and retain a qualified workforce.

Improvements would help with the deployment of $35 billion, as outlined in the plan, for DOE research and development spending on clean energy.

The White House wants a $5 billion increase for climate-related research across the federal government and an additional $15 billion for clean energy technology demonstration projects.

Carbon capture, utilization and storage of industrial emissions would get a boost, with the strategy calling for at least 10 "pioneer" projects for CCUS retrofits of large steel, cement and chemical production facilities.

Biden’s infrastructure proposal calls for a $10 billion investment in a new green jobs training program — a "civilian climate corps" — that the president expressed support for in his January executive order.

His support for this initiative mirrors a number of bipartisan congressional proposals to establish a "21st century civilian conservation corps" that would mirror the New Deal-era program.

"This $10 billion investment will put a new, diverse generation of Americans to work conserving our public lands and waters, bolstering community resilience, and advancing environmental justice … all while placing good-paying union jobs within reach for more Americans," the proposal reads.

The infrastructure spending would seek to upgrade 200,000 miles of roads and replace or repair some 10,000 bridges.

The proposal would also spend $85 billion on public transit upgrades and expansions, $25 billion for overhauling airports, and $17 billion on modernizing ports and waterways.

The senior official stressed that 40% percent of the dollars for infrastructure projects would go toward poor and disadvantaged communities, a pledge made earlier by Biden.

The White House wants an up-front investment of $16 billion to clean up abandoned coal and hardrock mines and plug old oil wells.

The plan includes $111 billion to remove aging lead service lines plaguing consumers across the nation, as well as a host of other contaminants.

The president’s proposal calls on Congress to invest $45 billion in EPA’s Drinking Water State Revolving Fund and in Water Infrastructure Improvements for the Nation Act (WIIN) grants to replace 100% of the nation’s lead service lines. EPA estimates there are between 6 million and 10 million such lines throughout the nation.

An additional $10 billion would be provided to monitor and remediate per- and polyfluoroalkyl substances (PFAS) in drinking water and to invest in rural water systems and household well and wastewater systems, including drainage fields.

The ambitious request is likely to appease Democrats in both chambers who have pushed for more water infrastructure funding in recent weeks while waiting to see the president’s proposal.

White House spokesperson Jen Psaki said Biden believes it would be "responsible" to offer a way to pay for the plan. The money would come largely though tax increases on corporations and the wealthy.

Biden wants to raise $2 trillion in federal revenue over the next 15 years by increasing the corporate tax rate from 21% to 28%, a move that would reverse about half of the Trump’s corporate tax cuts.

The plan would eliminate subsidies and tax breaks for the fossil fuel industry, without yet specifying which ones, and require polluters to resume paying into the Superfund Trust Fund for the first time since 1995.

Covering the cost of the American Jobs Plan is likely to spark some backlash on Capitol Hill with Republicans and some moderate Democrats likely to question hiking the tax rate that was cut with great fanfare only four years ago.

Already, Senate Majority Leader Mitch McConnell (R-Ky.) has warned the package "may actually be a Trojan horse for massive tax hikes and other job-killing, left-wing policies."

Transportation Secretary Peter Buttigieg, who earlier this week ruled out hiking gas taxes or creating a vehicles miles tax to pay for the plan, has sought to frame the plan as one that will prove popular with voters from both parties.

"Why wouldn’t we want to be creating these jobs in a way that’s better for the climate?" he asked on CNN earlier this week.

Progressives, on the other hand, are already calling the plan too small. Responding to early reports of the proposal’s contents, Rep. Alexandria Ocasio-Cortez (D-N.Y.) noted the spending would spread out over eight years.

"Needs to be way bigger," she tweeted.

Click here for the White House fact sheet of the Biden plan.