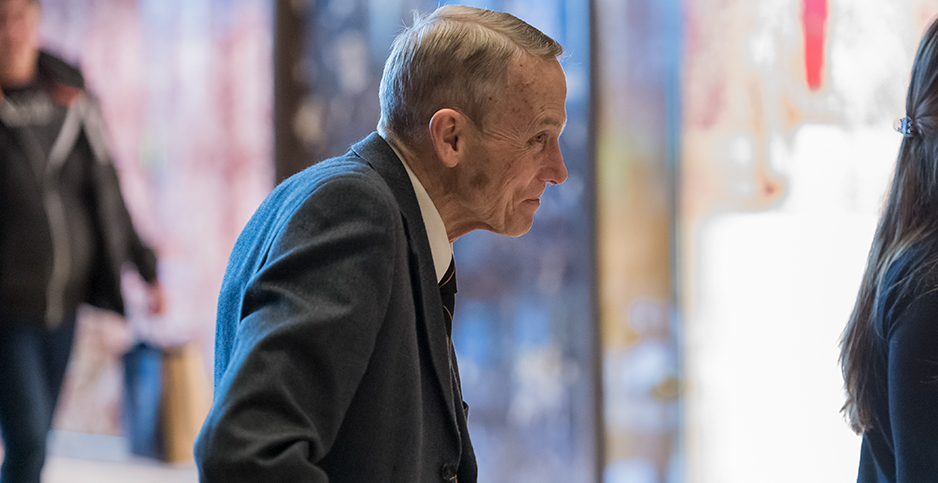 William Happer, a member of the White House National Security Council, is trying to establish a panel to question climate science. He's seen in Trump Tower in 2017. Albin Lohr-Jones/dpa/picture-alliance/Newscom

The proposed White House panel that would conduct an "adversarial" review of climate science is dead for now, as President Trump grapples with negative perceptions of his environmental record at the outset of his reelection campaign.

The monthslong push from within the National Security Council to review established science on climate change divided White House advisers and generated sharp opposition from researchers across the country. The effort, led by a physicist overseeing technology issues at the NSC, William Happer, stalled indefinitely amid internal disagreements within the White House, according to two sources.

"It’s been totally stymied by the forces of darkness within the administration, but also by the looming election campaign," said Myron Ebell, a senior fellow at the conservative Competitive Enterprise Institute who led the EPA transition team under Trump.

Happer has consulted conservative groups that attack climate science in an attempt to recruit members for the proposed panel. He’s spoken with policy analysts at the Competitive Enterprise Institute, Heartland Institute and CO2 Coalition, a group Happer founded and that claims that the world would be better off with higher levels of carbon dioxide emissions. The theories promoted by those groups are rejected by NASA, NOAA and the world’s top science academies.

Happer initially wanted Trump to issue an executive order to create the "Presidential Committee on Climate Security." He wanted the panel to review assertions within the National Climate Assessment related to risks from climate change on national security. Happer briefed Trump on climate science at least twice (Climatewire, June 24).

The idea to create the panel has caused strife within the White House. Among its critics are deputy chief of staff Chris Liddell; Kevin Hassett, the outgoing chairman of the Council of Economic Advisers; Larry Kudlow, director of the National Economic Council; and Kelvin Droegemeier, the president’s science adviser. Those supporting the plan include Trump’s son-in-law and senior adviser Jared Kushner and Brooke Rollins, assistant to Trump in the Office of American Innovation.

An official at NSC disputed the characterization that the panel was dead, even while confirming that it had been indefinitely delayed. The plan has suffered several downgrades over the months. It was initially proposed as a rapid response team of climate science critics who would challenge government publications on human-caused warming. Recent discussions have centered on the idea of forcing government climate scientists to participate in a debate with critics of their work who deny that humans are causing widespread changes on Earth (Climatewire, June 6). Most recently, the plan was diminished to creating dueling white papers that would elevate climate denialism to the level of consensus science.

Those in talks to participate as critics of mainstream science include John Christy of the University of Alabama, Huntsville, and Judith Curry, former head of the School of Earth and Atmospheric Sciences at Georgia Tech. A potential leader of the exercise was Paul Robinson, a former Department of Energy official who oversaw talks about nuclear weapons tests with the Soviet Union, but who is not trained in climate science.

Trump supporters who want the administration to be more aggressive in its rejection of climate science were frustrated that the climate review panel had been sidelined. Ebell of the Competitive Enterprise Institute sees it as a sign that the Trump campaign is sensitive to Democratic attacks on climate change.

"The reelect campaign has been completely taken over by the usual cast of Republican establishment consultants who are primarily concerned with making very large amounts of money on the campaign," Ebell said.