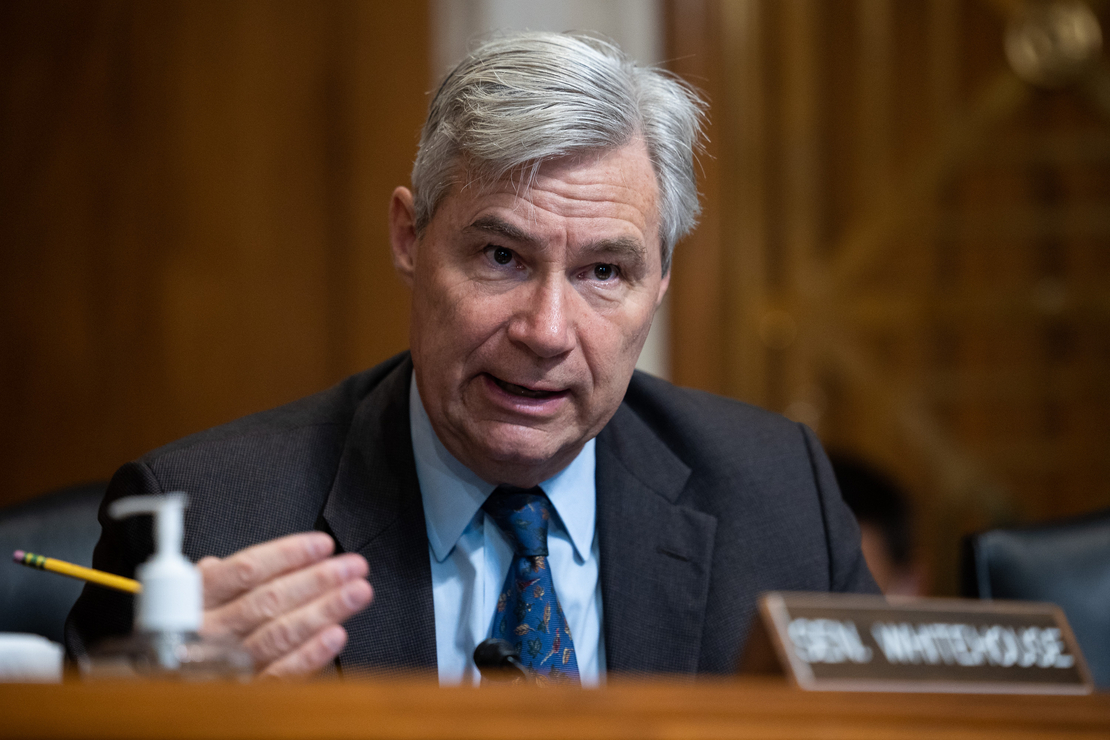 One of the Senate’s most outspoken critics of fossil fuels accused the industry of bankrolling a decadeslong effort to reshape the Supreme Court so it could demolish regulations.

“It took patience and planning, but what a payoff when you succeed!” Sen. Sheldon Whitehouse (D-R.I.) said on the Senate floor yesterday. “And now it’s payday.”

Whitehouse timed his remarks for a Supreme Court ruling, expected as soon as today, in a case that could curtail EPA’s power to curb carbon emissions at power plants. He accused fossil fuel donors of sinking hundreds of millions of dollars into nurturing legal theories, scholars and judges that could get rid of regulation.

The case in question, West Virginia vs. EPA, was launched by Republican state attorneys general and the coal industry to challenge a regulatory model for reducing emissions at fossil fuel power plants. At issue is the Obama-era Clean Power Plan, which never took effect.

Environmental lawyers expressed surprise last year when the high court agreed to review a lower court’s decision to strike down a Trump-era replacement rule that sought to establish a narrow reading of EPA’s regulatory authorities under the Clean Air Act.

The petitioners, led by West Virginia, have urged the court to consider legal doctrines that could have ramifications not only for EPA’s Clean Air Act authorities but for a host of regulatory functions performed by agencies across the federal government.

Whitehouse said those theories had no constitutional basis and were invented by fossil fuels-based think tanks and legal foundations that function as “factories where doctrines are crafted, reverse-engineered from the results the big donors want.”

The goal, he said, is to disable agencies’ regulatory function — not only for climate change, but for other environmental concerns, public health, and other issues in the public interest.

“There is abundant incentive, but little historical or legal basis, for the anti-regulatory industry theories,” the brief states.

The senators and Chemerinsky pointed to a law review article by Julian Davis Mortenson and Nicholas Bagley of the University of Michigan that argued delegation by Congress to agencies has been common since the 18th century. Early Congresses regularly enacted laws that empowered administrative agencies to write rules on important policy issues, they wrote.

But Devin Watkins, an attorney with the Competitive Enterprise Institute, a think tank that Whitehouse mentioned in his speech and that has also filed an amicus brief in the West Virginia case supporting nondelegation, said the doctrine dates back to the Supreme Court’s fourth chief justice, John Marshall, at the start of the 19th century.

To determine that, the Supreme Court is the final arbiter.

The Democratic senators said in their amicus brief that giving the court such uninhibited power could erode democracy.

“The industry’s antidelegation theories would de-democratize this process by transferring power to an unelected judiciary, to strike down laws whenever a delegation of power makes them uncomfortable,” the senators said. “This removes political decisions further from democratic accountability.”

But Frank Garrison, an attorney at the Pacific Legal Foundation, a libertarian think tank, said Article 3 of the Constitution assigns the courts a role in “policing” the separation of powers between the branches of government.

“When agencies go outside of what the Constitution allows or Congress delegates away its power, it’s the Supreme Court’s job to declare where that law is,” he said. “I don’t see them taking away power from Congress or administrative agencies. They’re just enforcing the Constitution.”

While questions of nondelegation have come up at various times throughout U.S. history, the major questions doctrine is newer. Garrison said one of the first Supreme Court decisions to invoke it was FDA v. Brown & Williamson Tobacco Corp. in 2000, which found that the Food and Drug Administration lacked the statutory authority to regulate tobacco as a drug.

If Congress wished to regulate an industry that had been around for hundreds of years, it needed to enact new legislation, the court found, rather than relying on FDA’s existing authorities.

The senators said that if the Supreme Court embraces the nondelegation theories and limits the regulatory function of agencies, that would place an unsustainable burden on Congress to enact new laws. But Watkins and Garrison said Congress has the capacity to write more prescriptive laws if it knows it has to.

Watkins suggested that EPA experts could still frame regulations, and Congress would vote on them before they took effect.

Congress has struggled to pass even essential spending and budgetary laws in recent years due to partisan gridlock. But Watkins said the Senate filibuster, which sets a 60-vote threshold for controversial legislation, need not be a barrier to Congress taking a more hands-on role in regulation.

“The filibuster is a rule that Congress has chosen to set up,” he said. “It doesn’t need to exist if Congress doesn’t want it to exist. And if Congress wanted to say, ‘Send all the rules through Congress, and we’ll approve them and give an exception to the filibuster in these circumstances,’ it would be free to do so.”

Correction: An earlier version of this story misspelled the name of Devin Watkins, an attorney with the Competitive Enterprise Institute.