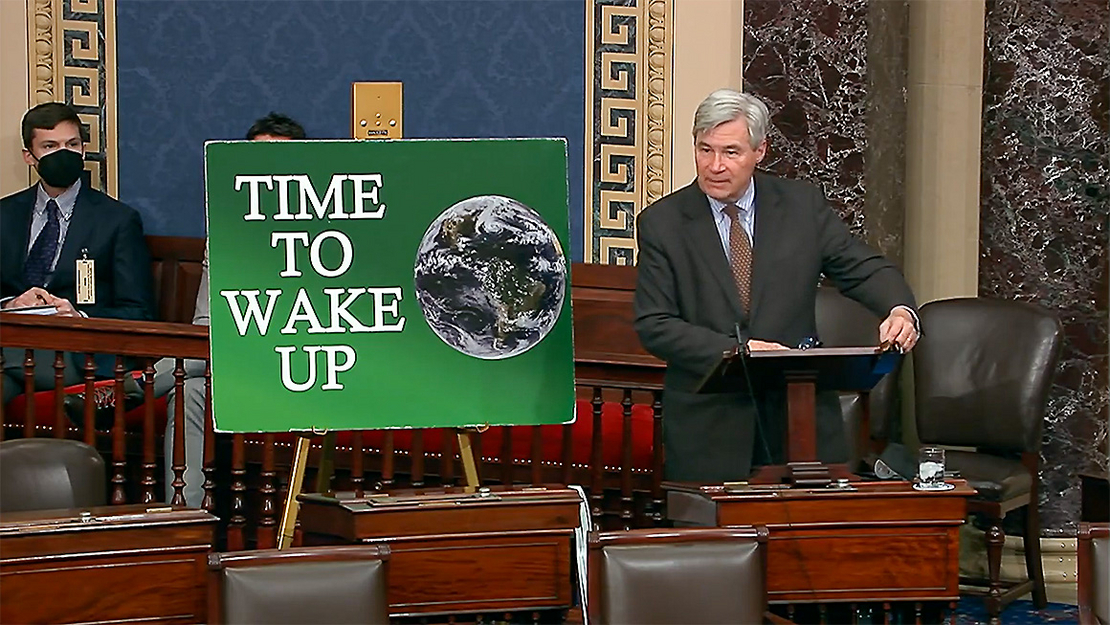 With the “Build Back Better Act” stalled and marginal progress on greenhouse emissions in the executive branch, Whitehouse stood in front of the green poster he has used for years and offered a relatively pessimistic view of the state of play in climate politics.

Many of the points were familiar. He decried the lack of pro-climate lobbying in corporate America, blasted big public relations firms for helping oil companies “green wash” their image and said the fossil fuel industry controls Republicans “in the way a ventriloquist controls a painted wooden dummy.”

But this time, he had a different political backdrop as his own party struggles to push its massive climate and social spending bill through the 50-50 Senate.

“After I stopped these speeches, the Smithsonian asked me if they could have this old poster,” Whitehouse said on the floor, gesturing to the battered green “Time to Wake Up” sign standing behind him. “It’s the most-used poster in Senate history, it turns out, and I came pretty close to turning it over to them, but something made me hesitate. And well, here it is back again.”

From April 2012 to January 2021, Whitehouse delivered a new version of “Time to Wake Up” every week the Senate was in session. Many of the topics reappeared frequently — especially dark money and fossil fuel trade organizations — but Whitehouse and his deteriorating poster became a fixture for climate hawks and those who follow Congress closely.

He occasionally brought in guest speakers, including during a notable joint speech with Louisiana Republican Sen. Bill Cassidy (E&E Daily, May 2, 2019).

The Rhode Island Democrat gave what he thought would be the final iteration of the series last year with an optimistic tone.

President Biden had signed a series of executive orders on climate change in his first few weeks in office, and Democrats were talking up the prospects of a major climate bill. The U.S. Chamber of Commerce — a longtime Whitehouse nemesis — had also just shifted its official views on climate, opening the door for a price on carbon.

A year later, Whitehouse said there is little to show for all that talk.

“The purpose of the speech was not to throw in the towel,” Whitehouse said in an interview after the speech yesterday. “The purpose was to note that at the moment, we’re getting no place. The Republicans are still obstructing anything serious.”

Democrats, he added, “have no offense to take on the fossil fuel denial operation.”

On that note, he said Democrats should offer full-throated support for the climate misinformation investigation of oil companies and trade organizations that the House Oversight and Reform Committee is conducting (Greenwire, Jan. 21).

But Whitehouse and other Democrats believe they have largely reached consensus on the $550 billion in climate investments and clean energy tax credits, despite past objections by Manchin to the methane fee and other provisions.

Whitehouse also said he still hopes to add a carbon fee to the bill, given “conceptual agreement” on the issue among Democrats.

“When we reignite work on a real climate bill, when we’re starting to see real administration climate progress, I’ll see about getting this battered poster over to the Smithsonian,” Whitehouse said on the floor. “But if we don’t, I’ll be back here again and again and again to call this chamber to wake up.”

In the future, however, Whitehouse said he will be giving the speeches “on more of an as needed basis” so that his staff won’t have to help him churn them out every week.

Yesterday’s revival also came on Groundhog Day, which Whitehouse acknowledged might make for a good comparison, with climate policy teetering in an uncertain position in the Senate.

“Can we find a use for the reconciliation measure that meets our climate goals? I hope so. I’d like to believe so. I want it to be so,” Whitehouse told E&E News. “But we can’t just stand around and pretend like good things are happening, because it’s a complete stall right now.”