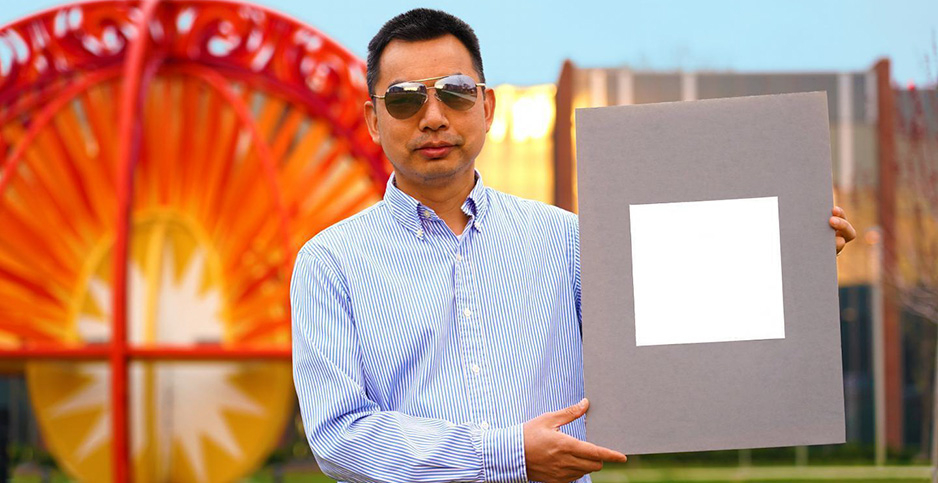 Xiulin Ruan holds up his lab's sample of the whitest paint on record. Jared Pike/Purdue University

A new "ultra-white’ paint could be a valuable tool for adapting to climate change, according to a research team at Purdue University that recently developed one of the whitest paints in existence — a shade so bright it reflects as much as 98% of the sunlight that strikes it.

By reflecting the sun, this paint, the scientists say, can help cool buildings and lower energy costs — an increasingly useful service as global temperatures rise and dangerous heat waves intensify all over the world.

"If you were to use this paint to cover a roof area of about 1,000 square feet, we estimate that you could get a cooling power of 10 kilowatts," Purdue researcher Xiulin Ruan said in a statement. "That’s more powerful than the central air conditioners used by most houses."

In the lab and in early field tests, it’s been highly successful. The team found that the paint can cool surfaces by nearly 20 degrees Fahrenheit under certain conditions, and by as much as 8 degrees Fahrenheit even under a blazing midday sun.

The team has already filed patents on the new development, described in a paper published last month.

Still, experts caution, these early tests don’t necessarily reflect how the paint will perform in the real world. Even the brightest white paint will dull over time as soot, mold and other grimy pollutants settle on its surface. What’s more important is how a product performs after it’s been exposed to the elements for a few years.

Scientists know this because there are already many highly reflective paints and other products available to cool buildings today. Some, like the new ultra-white paint, have solar reflection topping 90% in the lab.

The very best of these products might still hit between 80% and 90% in the field after they’ve aged several years, according to Ronnen Levinson, a scientist at Lawrence Berkeley National Laboratory and an expert on cool-surface technologies.

But even lower than that is more typical, said Hashem Akbari, an expert on urban heat and cool surface technologies at Concordia University in Canada. In general, any product that still has a solar reflectance of around 70% after aging in the field is doing "an extremely good job," he said.

It remains to be seen how well the new ultra-white paint performs with age. It may present an incremental improvement, although an increase of a few percentage points probably "isn’t going to improve overall energy savings by all that much," Levinson noted.

Still, the new product, which was widely covered in the news, cast a spotlight on the idea of cool surfaces. And it’s a concept that deserves more attention in a warming world, many experts say.

"The innovation is great, I think it’s interesting, and who knows what comes after that from this," said Kurt Shickman, executive director of the nonprofit Global Cool Cities Alliance.

But the bigger challenge today, he said, is expanding the implementation of cool surface technologies in places threatened by extreme heat.

"In terms of performance, I do think we’d be much better off if we all got a little bit more reflective rather than having a couple buildings be extremely reflective," he said.

The concept of cool, reflective surfaces has existed in the U.S. for decades, according to Shickman. They’re most often applied on rooftops, which receive the most exposure to sunlight.

Today, many states and municipalities across the country have already adopted energy codes for commercial buildings requiring some level of reflectivity on the roof. Doing so can cut down on the use of air conditioning and increase energy savings.

It’s a useful step in a world where urban environments are already unnaturally hot, and getting hotter as the climate warms.

Cities are often several degrees warmer than their surrounding areas, a phenomenon known as the "urban heat island" effect. That’s because cities typically have less vegetation and more dark, heat-absorbing surfaces, like concrete and pavement.

In recent years, numerous studies have warned of the growing risks associated with urban heat on a warming planet.

One 2019 study found that the urban heat island effect will drive significant extra warming in cities around the world over the next few decades — that’s on top of the warming already expected from climate change.

On average around the world, the study suggests, urban warming is likely to be about half as strong as the effect from global warming. That means a city that warms 2 degrees because of climate change could experience an additional extra degree of warming from the urban heat island effect.

Another recent study looked at the combination of climate change, population growth and the urban heat island effect in U.S. cities.

While the risks vary from one place to the next, the study found that some cities could experience as many as 70 more "hot days" — days in the 99th temperature percentile for that location — by the end of the century. At the same time, as cities expand and the population grows, more and more people will be threatened by extreme heat.

Scientists and urban planners have touted various strategies for reducing urban heat, including more vegetation and more cool surfaces. But while cities have begun to implement these strategies, especially on commercial buildings, experts say there’s still plenty of room for expansion.

Researchers are already developing cool shingles for use on residential roofs. And in some places, the idea is catching on. Los Angeles, for instance, requires that new steep-slope roofs have a minimal level of solar reflectance. The requirement is less than 30% in most cases, making it a relatively modest requirement — still, it can be easily accomplished by simply using lighter-colored shingles.

Meanwhile, roofs shouldn’t necessarily be the only targets, Levinson suggests. Cool walls may be the next frontier.

Research suggests that both the cooling and energy-saving benefits of reflective walls are comparable to the benefits of cool roofs, he said. And it doesn’t take much cost or effort to produce results. Even a typical, muted-white shade of paint can have a solar reflectance as high as 60% or so.

Various building standards and certifications have recently begun to more widely account for the benefits of cool walls in addition to cool roofs, he added. These include the American Society of Heating, Refrigerating and Air-Conditioning Engineers, which develops energy standards used in building codes, the LEED rating system used by the U.S. Green Building Council and the Cool Roof Rating Council, which evaluates the reflective properties of roofs and walls.

"This turns out that cool walls are a really nifty idea with benefits similar to those of cool roofs," Levinson said. "And the nice thing is that you can do it right now."

‘The most important story’

Studies clearly suggest that cool surfaces are effective at lowering temperatures — and the more surfaces, the better. Still, that doesn’t mean there’s nothing to consider when it comes to cool surface technology.

Studies generally suggest that cool roofs save energy on air conditioning, and these savings typically outweigh any increased heating costs they might bring about in the winter. These savings do tend to shrink in colder climates, Levinson noted — and in some very cold climates, it may turn out that the annual energy cost savings are negative.

If a city’s biggest priority is saving energy, rather than just lowering temperatures, that’s worth noting.

In recent years, studies have also occasionally questioned the influence of cool roofs on their surroundings. If cool roofs are implemented at a large enough scale, some research suggests, the cooler temperatures could potentially alter the local climate — for instance, by slightly reducing precipitation.

It’s not a big concern compared to the risks of urban heat, according to Akbari, the Concordia University researcher. Cities make up a small percentage of the Earth’s land area to begin with, he said, and any changes to their reflective properties would probably have only minor effects.

But other experts are cautious about dismissing these kinds of concerns outright. Making a city more reflective can sometimes have unexpected side effects, said Matei Georgescu, an expert on climate and urban planning at Arizona State University. These effects are often highly dependent on the local geography and climate — there’s no one-size-fits-all answer.

Parts of Los Angeles, for instance, have recently experimented with cool roads, made of reflective pavement, in addition to cool roofs. But all these cool surfaces may have an unwelcome side effect, particular to Southern California, according to Georgescu. It can weaken the cool sea breeze that flows in from the ocean.

"The sea breeze is dependent on the land surface being warmer than the adjacent ocean," Georgescu explained. "If that thermal contrast doesn’t exist, then the sea breeze will be weakened."

There’s also some evidence suggesting that cool surfaces could inadvertently decrease local air quality in some places, he added. The cooling effect can slightly alter the atmosphere in a way that may affect the way pollution accumulates close to the Earth’s surface.

Ideally, cities considering large-scale cooling projects should conduct studies considering all possible environmental side effects, he added. Then they can weigh all the outcomes against their primary goals — saving energy, lowering temperatures or whatever the end target may be.

In any case, it’s helpful to be informed of the big picture, Georgescu said.

"To my knowledge such whole-scale environmental assessments have not been done anywhere," he said. "But I think that now probably we do have the comprehensive tools to make such assessments."

Much of the discussion about cool roofs today tends to be framed around energy savings. But as the climate continues to warm, that’s not necessarily going to be the most important outcome, Levinson said.

Extreme heat already kills hundreds of people across the U.S. each year. And heat waves are growing more intense as the climate warms. They’re especially dangerous to people without access to air conditioning.

"I think that, for the rest of the century, is the most important story," he said.