Who cares if it’s climate change? This guy wants action 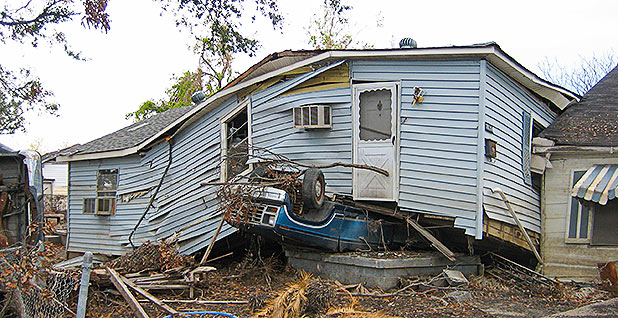 A scene in New Orleans' Lower 9th Ward after levees broke during Hurricane Katrina in 2005. Katrina killed over 1,800 people and caused nearly $150 billion in damages. Photo by Infrogmation of New Orleans, courtesy of Flickr.

BOULDER, Colo. — Perhaps the first clear sign that the United States is considering serious changes in the way it forecasts extreme weather events came in a meeting here in June 2015. It featured a blunt-spoken Australian meteorologist, Greg Holland, who ticked off the flaws in the current U.S. system.

There are serious problems with the nation’s climate models, he noted. While they’re pretty good on forecasting some things, such as rising temperatures, "they’re actually crap on rainfall," he said, noting that models have failed to predict major droughts. One was the worst in U.S. history, the Great Plains Drought of 2012.

Predictions of hurricanes dwell on wind speed but tend to ignore aspects such as the slow movement and size of a storm, aspects that can create storm surges that lead to more severe damage and loss of life, he asserted. Moreover, the models have grown too big, nonspecific and complex to give much warning or help to community leaders struggling to protect their cities or towns against a major storm.

Then there are the communities themselves. As Holland put it: "We have had a massive loss in society resiliency. The U.S. a hundred years ago could recover from [weather] systems far better than any society that we’ve got in any major city can now. It’s partly because we’ve forgotten how to recover. It’s also partly because we’re so bloody complicated now that it’s really harder to recover."

The problem cuts across business, agriculture, transportation and other sectors, as well, Holland said. While plans for forecasting and dealing with extreme weather haven’t changed much in the last 50 years, the damage from storms has almost quadrupled globally. As things stand, Holland predicted, the United States is heading for more change and uncertainty in the form of extreme weather events.

"Across all of this," Holland noted, "is the lack of communication."

A few months later, the National Academy of Sciences underscored Holland’s concerns by publishing a plan to engage users of weather forecasts in helping to develop more accurate, long-term forecasts and to increase their predictive skills for extreme weather. One of the sponsors of the academy’s plan was the Pentagon, in the form of the Office of Naval Research.

Coupling computer models with a broader array of data from the Earth’s surface and atmosphere, the academy noted, is a technique "still in its infancy, but has the potential to spur a more dramatic leap forward."

There’s an app for that

That is a complex area, but one of the leaders in it is Holland. Meteorologists, businessmen and planners listen to Holland, a scientist whose career has been an Australian-American amalgam of innovation and work with both Australia’s Bureau of Meteorology Research Centre and the Boulder-based National Center for Atmospheric Research (NCAR), where he is leading the formation of a new government/business partnership.

The goal: to bring in the more serious users of weather forecasts. It is called Engineering for Climate Extremes Partnership (ECEP).

The partnership is aimed at fixing some of the problems Holland described in his seminar and in the recommendations of the academy, beginning with forecasting. ECEP is financed partly by NCAR and by a number of businesses, including an international cluster of insurance and reinsurance companies looking for ways to reduce the damage of hurricanes and other extreme weather events because they wind up paying the rapidly escalating bills.

"There is a hell of a lot of good science out there," noted Guillermo "Willy" Accame, director of risk management for Panattoni Development Co. Inc. He and other partners have spent the last three years helping Holland design ECEP. The difficulty, Accame noted, "is taking some of the science, a lot of which is basic research, and translating that into something that is helpful for user communities, whether they be a city or a company or a governmental entity."

Panattoni, which is based in Newport Beach, Calif., is a large, privately held real estate development company that builds warehouses and office buildings across the United States. According to Accame, it would like to have longer-range predictions about future weather impacts in areas where its projects are, including precipitation, temperature ranges showing when it becomes too cold to pour concrete and the potential of lost work days because of the approach of extreme weather.

"The question becomes if you are given information that is useful, instead of having to adapt on the fly, you can actually do some planning for that adaptation. A lot of people think in black and white. So they say temperatures are going to go so high we won’t be able to do X. Well, guess what. We’re still going to be able to do X, we’re just going to have to do it a little differently."

One of the reasons Accame’s company and others are helping to flesh out Holland’s partnership is that he speaks their language. Holland once ran a company that built and pioneered the use of drones, small robotic aircraft used to explore and record weather conditions where such research is most dangerous, such as sea-level atmospherics underneath tropical hurricanes.

Climate scientists are also attracted to Holland’s new partnership approach because it helps get their discoveries out more quickly and into the hands of people who can use them. "Usually when I finish my work I write a paper and nobody beyond scientific colleagues reads it," explained Debasish PaiMazumder, a drought expert and one of a number of scientists working at ECEP on specific problems.

Instead, PaiMazumder finished one recent study by designing a specific tool: It is an application called "Climate-I" that is slated for a website ECEP is building. PaiMazumder hopes his app will help construction companies such as Accame’s prepare for and thus reduce their losses from extreme weather events.

A second Climate-I is being designed for farmers and agricultural companies to get better seasonal predictions that will help them prepare for and thus mitigate extreme weather threats, such as droughts and heat waves that are likely to reduce production in specific regions, or to threaten specific crops.

Other apps in the works at ECEP will help specific cities to more effectively plan for damage from hurricanes where storm-driven surges and flooding and the peculiarities of local topography are factors that cause the most damage. One will allow the city of Brisbane, Australia, to run computer models of specific storms against the city’s defenses to better appreciate the quirks and power of future storms.

Some climate models used by government agencies and researchers at universities are powerful, hugely complex and expensive and can take days to run on supercomputers. Holland is pushing ECEP’s scientists to prepare smaller, simpler models, ones that can be run on laptops by planners and others who will be called on to develop better ways to protect cities and lives.

"We want to make them visually appealing and more accessible," explained Cindy Bruyère, a deputy director at ECEP. "You don’t need to have a science degree to use science in your job."

Giving vulnerable communities a ‘plan B’

Part of the inspiration for this work comes from two disasters. The first was Hurricane Andrew, which hit densely populated south Florida in August 1992. It destroyed or damaged 164,000 homes, left 175,000 people homeless and caused $26 billion in damage along its path across the Southeast.

At the time, Andrew was the most expensive storm in U.S. history. Few people were more shocked by it than insurance executives. There were 600,000 insurance claims, and 11 companies went bankrupt trying to pay them.

Geoffrey Saville, an analyst for Willis Group Holdings PLC, a London-based major reinsurance company, later wrote that the financial tremors were felt both in the United States. and in Europe. As he put it, one result was "the final straw" for the previously casual ways the industry estimated extreme weather losses. Insurers, and the reinsurers that back them up financially, began to develop their own computerized catastrophe models, or "cat models," that analyzed the potential damage of storms and gave their customers more science- and statistical-based predictions of future risks.

If they paid the expensive premiums, businesses could get a better view of their risks from the models and insure themselves against losses above those they felt they could handle. But then came a bigger shock: In 2005, Hurricane Katrina devastated New Orleans and killed more than 1,800 people in six Gulf Coast states. The storm cost the federal government over $105 billion and private insurers $41 billion. Katrina caused the largest aggregate loss in the history of insurance.

While Katrina was better predicted than previous storms, it arrived earlier than forecast, giving planners only 2.5 days of warning, and created a storm surge that collapsed the city’s levees. "This was a real world scenario that the models hadn’t taken into account," explained a later study done by ECEP.

The upshot of these two experiences, according to Holland, is that ECEP’s partnership is aimed at seeking an enlarged dialogue among businesses, insurers, scientists, universities and governments. He wants to develop better cat models, some of which ECEP will put in the public domain. The combined effort will be guided by a philosophy that he calls "graceful failure," an approach that gives communities a plan B to help save lives and restrict damage, rather than relying on one defense alone, as New Orleans did with its levees.

Graceful failure, Holland pointed out at the conclusion of his seminar, is a concept that came out of the private business and engineering communities. "It didn’t come out of us," he said, referring to the scientific community. "It tells you that you shouldn’t do the planning unless you think about what happens if it fails. It’s a mindset, but it’s an amazingly powerful one."

This, he explained, is among the reasons why he needs the business community in ECEP. "Running your own company gives you a much sharper view of how the world works than being a scientist," he noted. "If you’re a small company and you put something out that doesn’t work, you’re out of business so damned fast that it doesn’t matter. So basically that’s one of the safety valves we have in here."

Saville, who helped bring Willis, the London reinsurer, into the partnership, later produced a paper explaining why insurers and other businesses welcome an enlarged dialogue in ECEP. It will give them better access to governments, universities and the cutting edge of climate science, including the largest and most advanced computer models.

"We need to understand what history can tell us about natural catastrophes in terms of damage, impact and loss, while at the same time try to tame the uncertainty of the future and better account for what is yet to come," he explained.