‘Who did it?’ zeroes in on Russian hacking 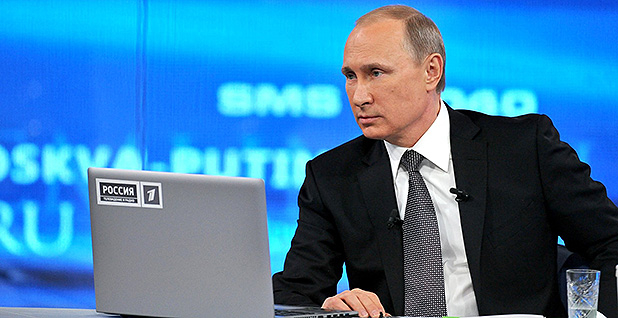 Suspicion has fallen on hackers with ties to Russia, in part because of past intrusions into U.S. companies and for Russia-linked attacks on Ukraine’s power grid in 2015 and 2016.

Analysts remain quick to tamp down assertions that Russia’s fingerprint on the latest attack is a sure thing.

Without mentioning any nation-state by name, former Energy Secretary Ernest Moniz noted on Twitter that "these ‘advanced persistent threats’ have long worried U.S. intelligence officials — and recent events prove they are very real."

If U.S. intelligence agencies confirm Russian security services were involved in the attack on nuclear plants, tensions with Moscow could escalate. In a Twitter comment that attracted bipartisan ridicule, President Trump yesterday morning said that he and Putin had agreed to create an "impenetrable Cyber Security unit" to guard against hacking, only to apparently reverse his position hours later and suggest such an arrangement "can’t" happen.

The FBI, the Office of the Director of National Intelligence and the CIA, among other intelligence groups, have already concluded that Russia’s government supported a hacking campaign aimed at influencing the outcome of last year’s U.S. presidential election. Throughout the campaign and the first months of his presidency, Trump has demurred over the level of Russia’s involvement in malicious activity directed against the U.S., particularly with regard to the election.

Trump has called for stronger cybersecurity for critical infrastructure such as the power grid. But his critics are pointing to both the notion of a joint U.S.-Russia cyber unit and the administration’s proposed budget cuts to agencies responsible for energy cybersecurity.

Sen. Maria Cantwell (D-Wash.), ranking member of the Senate Energy and Natural Resources Committee, reiterated her calls for the White House to assess energy-sector cyber vulnerabilities and abandon proposed budget cuts at the Department of Energy. "The disturbing reports of the past 24 hours indicate that our adversaries are trying to take advantage of the very real vulnerabilities of our energy infrastructure’s cyber defenses," she said Friday.

In 2015, a group of hackers set sights on several Ukrainian electric distribution companies. The intruders broke into the utilities’ business networks with "phishing" emails designed to lure employees into clicking on a document laced with malware.

From there, the attackers mapped out their victims’ computer systems, even gaining access to the virtual private network utility workers used to remotely operate parts of Ukraine’s electric grid.

Instead of stowing malware in the Word document itself, the hackers tweaked a control engineer’s résumé into beaconing out to a malicious server via a Microsoft communications protocol called Server Message Block. The cyber intruders could then swipe fragments of SMB traffic containing the victims’ login information to set up an authorized connection to the targeted network and move on from there, Williams explained.

The technique points to "attackers who are dedicated and who’ve done their research," he noted.

Electric utilities typically adhere to a three-step model for protecting their most sensitive systems from hackers. At a basic level, this setup involves an information technology network — such as a utility’s internet-connected corporate headquarters — and an operational network that includes grid control systems. Companies typically add a third layer or "demilitarized zone" bridging those two sides of the business, replete with firewalls, cybersecurity technologies and other safeguards.

Within that last, critical zone — Level 4 in nuclear industry parlance — tight physical controls prevent phones and USB drives from getting in; and operational data is designed to flow only outward through "data diodes," with no potential for online commands to enter from the public internet or even the site’s own local area network.

"Anybody ever reports that somebody got a connection from the internet directly or indirectly into the heart of a nuclear control system is either full of crap, or is revealing a massive problem with some particular site, because there should be physically no way for that to actually be possible," said Andrew Ginter, vice president of Waterfall Security Solutions, which markets one such "unidirectional gateway" or data diode to the U.S. nuclear sector. "To me, it’s almost inconceivable."

Marty Edwards, managing director of the Automation Federation, who until last month headed a team of industrial control security specialists at DHS, generally agreed that a remote connection would be nearly impossible to achieve. "When we tested those kinds of [one-way] devices in the lab, we found that you couldn’t circumvent any of them, basically, because they’re physics-based," he said. "There’s no way to manipulate that stream."

One source familiar with nuclear information technology practices, who agreed to speak about security matters on condition of anonymity, said that "in order to have a catastrophic impact, you have to get by the human in the control room" — no easy feat. "You’re talking workers who are regularly screened for insider [threat] indicators and psychological stability."

But the source, who had reviewed recent DHS and FBI warnings about recent nuclear cyberthreats, added that there was no indication the actor behind it got close to nuclear operators’ crown jewels.

"To get around the data diodes and all the other defenses, it’d be unprecedented at this point," at least from a U.S. perspective, said the source.