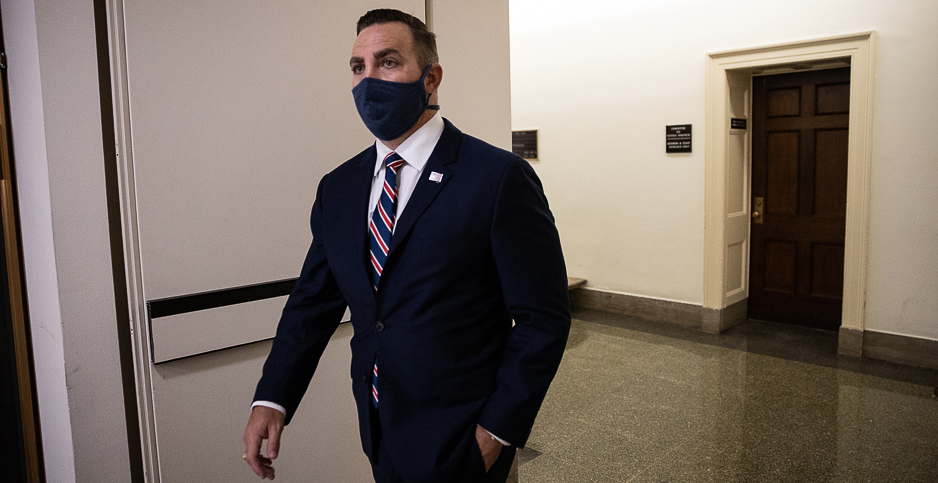 Maj. Adam DeMarco turned his phone off Monday night after news broke that he would be a star witness on Capitol Hill yesterday, accusing the U.S. Park Police of using excessive force to break up a crowd of protesters outside the White House on June 1.

DeMarco, an Iraq War veteran who now serves as a major in the D.C. National Guard, testified under the Military Whistleblower Protection Act, telling a House panel that he could not sleep after witnessing the violence at Lafayette Square and knew then that he had to speak up.

"I knew something was wrong, but I didn’t know what," he told the House Natural Resources Committee.

DeMarco told lawmakers he concluded there was no justifiable reason for Park Police officers to use tear gas and batons to disperse the peaceful crowd, blaming them for inciting the violence that ensued.

Lawmakers on the panel offered two competing views of Washington’s latest whistleblower, a U.S. Military Academy graduate who served more than a decade as a commissioned officer for both the Army and National Guard, was once photographed with former Republican President George W. Bush, and ran as a Democrat for a Maryland House seat in 2018.

Noting his unsuccessful run for Congress, Rep. Louie Gohmert (R-Texas) told DeMarco his testimony "will serve you well with the Democratic Party," but he questioned his loyalty to the military for opposing his commander in chief’s contention that the Park Police acted appropriately in dispersing violent protesters.

"I’m trying to get used to this new military," Gohmert said.

"Major, does running for Congress disqualify you from being a truthful person?" he asked.

"I’m glad you answered it that way — otherwise many of us would be in a considerable amount of trouble right now," Grijalva said.

‘The fortitude to come forward’

DeMarco’s testimony came after acting Park Police Chief Gregory Monahan defended the actions of his police officers in breaking up the crowd of protesters, saying they had shown "tremendous restraint" in dealing with an outbreak of severe violence that took place over four days (Greenwire, July 28).

Monahan told lawmakers that protesters had been "physically combative," throwing bricks, bottles and fireworks at officers and injuring more than 50 of them.

But DeMarco called the Park Police response "deeply disturbing to me, and to fellow National Guardsmen."

"Considering the principles of proportionality of force and the fundamental strategy of graduated responses specific to civil disturbance operations, it was my observation that the use of force against demonstrators in the clearing operation was an unnecessary escalation of the use of force," he said.

The protests that turned violent in Washington were part of the ongoing nationwide demonstrations against police brutality, sparked by the Memorial Day killing of George Floyd, an unarmed Black man who died while in the custody of Minneapolis police.

A white officer was charged with second-degree murder and manslaughter after a video showed him holding his knee on Floyd’s throat for nearly nine minutes while Floyd gasped for breath.

DeMarco said protesters were exercising their First Amendment rights and that he chose to testify to "ensure that there is a fair, factual record of what happened at Lafayette Square, based on what I saw and experienced firsthand."

"I especially want this committee; the residents of Washington, D.C.; and the American people to know that the soldiers and airmen of the D.C. National Guard performed with the utmost professionalism and integrity, faithful to our Constitution, under the most challenging of circumstances," he said.

DeMarco told lawmakers that he came from a military family that continues to inspire him.

He testified that his paternal grandfather enlisted in the Navy in the 1930s and was captured by the Japanese in 1942, surviving 42 months of forced labor, torture and starvation until liberated by Allied forces in 1945.

And he said his maternal grandfather had served in the Marine Corps and later fought in the Korean War, receiving the Purple Heart for wounds sustained in combat.

"In the 1980s, my father also engaged in public service — first as a law enforcement officer in Pinellas County, Fla., and subsequently as a special agent at the Department of Defense and the Department of Transportation," DeMarco said. "His example imparted to me essential core values that I strive to live up to each and every day."

Grijalva thanked DeMarco for his service and "the fortitude to come forward," but he warned him that his willingness to speak up could come with a price.

"Given the reputation and the actions of this administration, retaliation and retribution is not beyond them, and we have many cases to point in that direction," Grijalva said.

With all the media attention DeMarco has received this week, Gohmert asked him: "You have any idea how many publications have mentioned your name since you came out against the reports by people within the administration at Lafayette park?"

"Negative, sir," replied DeMarco. "I put my phone on ‘do not disturb’ last night."