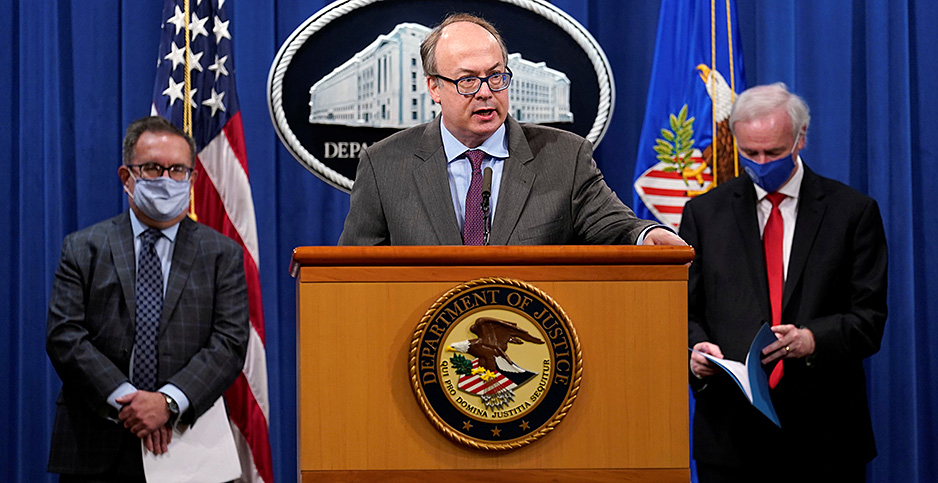 In early 2005, an environmental lawsuit of tremendous importance was barreling toward oral arguments in America’s second-highest court.

The case would determine whether EPA could regulate heat-trapping gases that cause climate change. A career attorney at the Justice Department who had been working the case for years was slated to argue it.

It would be a career-making hearing in the legal world. But at nearly the last minute, word came down from the highest levels of the Justice Department: A political appointee would argue Massachusetts v. EPA at the U.S. Court of Appeals for the District of Columbia Circuit instead.

It was Jeffrey Bossert Clark.

Attention is also turning to Clark’s tenure at the helm of DOJ’s Environment and Natural Resources Division. Clark worked in the division on two occasions, during the George W. Bush administration and the Trump years.

It is unusual for political appointees to argue cases, and attorneys who knew him during those stints said his parachuting in to argue Massachusetts v. EPA was emblematic of Clark: an intelligent attorney hellbent on furthering his own career, often at the expense of others’.

Several former DOJ attorneys, most of whom would only speak anonymously, said they weren’t surprised by the plot with Trump, which was first reported in The New York Times.

And those who closely followed his work at ENRD said it was just as alarming.

"Jeffrey Clark’s tenure at DOJ will be seen through the lenses of his efforts at the end of the administration to undo an election," said John Cruden, who worked at the division during both Republican and Democratic administrations and led it during the Obama years. "However, his policy statements during his tenure are equally bad."

“He was a uniquely divisive person at the environment division.”

Clark, who is now the subject of Senate and DOJ investigations, has disputed some of the claims against him, although he did say he had a "candid discussion of pros and cons with the president."

During his two years at the helm of ENRD, Clark oversaw DOJ’s environmental enforcement efforts and defended the Trump administration’s push to eliminate Obama-era clean air and water protections from the rulebooks. Last fall, Clark took the lead of DOJ’s Civil Division and handed over his day-to-day duties at ENRD to one of his deputies.

The Biden administration is expected to quickly reverse those changes.

"Our lawyers spend their time in court arguing that Trump’s political appointees didn’t care about the facts or the law. Jeff Clark spent his final days at DOJ making sure judges believe us," said Sambhav Sankar, a former ENRD attorney from 2008 to 2012 who is now senior vice president of programs at Earthjustice.

"He was a uniquely divisive person at the environment division," Sankar continued, "and I look forward to seeing it recover from his tenure."

Clark began his legal career in 1996 at the firm Kirkland & Ellis LLP, where he first crossed paths with Rosen.

Clark, a graduate of Harvard University and the University of Delaware’s School of Public Policy and Administration, had just wrapped up his legal education at Georgetown Law and a clerkship with a judge on the 6th U.S. Circuit Court of Appeals when he joined Kirkland. While at the firm, he quickly developed a passion for appellate and Supreme Court litigation on issues like environmental and administrative law.

At the start of the George W. Bush administration, Clark joined ENRD as a deputy assistant attorney general supervising the division’s Appellate and Indian Resources sections. It was during this stint at DOJ that Clark had his star turn arguing for the government in Massachusetts v. EPA in the D.C. Circuit.

Clark returned to Kirkland in 2005 and worked at the firm for 13 more years, honing his reputation as a skilled litigator for companies involved in environmental disasters and industry interests fighting aggressive climate regulation.

After the Deepwater Horizon explosion in the Gulf of Mexico, Clark represented BP PLC in litigation over the catastrophic oil spill.

He and Rosen joined forces to represent the U.S. Chamber of Commerce in a D.C. Circuit battle over EPA’s endangerment finding for greenhouse gases, which said that they may "reasonably be anticipated to endanger public health or welfare."

Clark argued before the court that the finding resulted in a cascade of new regulations that put an undue burden on companies that now had to comply with the rules.

By 2018, Clark was back at ENRD — this time, as the division’s leader, replacing Jeff Wood, who had been serving in an acting capacity for about two years.

During his confirmation hearings, Clark faced scrutiny about his environmental record, including a statement he made about climate science being "contestable" during a 2014 panel hosted by the Federalist Society.

"It is my understanding that there are a variety of viewpoints in the scientific community regarding global warming," Clark said in written responses to questions from the Senate Judiciary Committee.

He added that his job as ENRD chief would be not to analyze scientific data but to defend policymaking decisions by EPA and other agencies.

Once he was confirmed — by a narrow 53-45 Senate vote — Clark took a hands-on approach to the job, arguing the landmark Juliana v. United States case, in which a group of teenagers and young adults called on the federal government to phase out the use of fossil fuels.

In a win for Clark and DOJ, the 9th U.S. Circuit Court of Appeals rejected the kids’ claims, but not before warning about the dire implications of rising global temperatures. The political branches, the 9th Circuit found, should be the ones to address the climate crisis.

Not even physical injury could stop Clark from showing up in court: In 2019, he appeared before the D.C. Circuit with a broken foot to defend the Trump administration’s move to walk back an Obama-era plan for strengthening hardrock mining cleanup standards.

The division did notch some significant enforcement successes, including a landmark $180 million settlement with Toyota Motor Corp. over claims that the automaker had violated Clean Air Act emissions reporting requirements, which Clark announced on his last day at DOJ (E&E News PM, Jan. 14).

But the Trump administration also brought 70% fewer Clean Water Act and 50% fewer Clean Air Act cases in its first two years, according to a recent report by former DOJ attorney David Uhlmann. EPA data show that the agency, which refers cases to DOJ, had record low enforcement efforts in the fiscal year that ended Sept. 30, 2020.

Legal experts widely criticized a slew of policy memos that Clark released during his final hours at DOJ, including one document titled "Enforcement Principles and Priorities."

Rick Claypool, research director for Public Citizen, noted the memo’s addition of a "guilty mind" standard for environmental prosecutions, limiting judicial enforcement to only those cases that involve "intentional, knowing, or willful wrongdoing."

Cases that do not meet that standard may be more appropriately addressed by administrative enforcement or compliance assistance, the memo said.

"This is sort of engineering it so that ENRD can be the place where these corporate polluter enforcer actions go to die," Claypool said.

Clark’s midnight memos are not expected to survive under the Biden administration.

"He waited until the end of the administration to set forth his ‘priorities’ for the future, wishful thinking on his part that anyone would care about what his priorities might be," said Cruden, who is now a principal at the firm Beveridge & Diamond.

"Jeffrey Clark, like his last-minute policy statements, will soon find himself in the dustbin of history," he said.

Legal experts say reports of the alleged plot between Trump and Clark could serve as grounds for another impeachment and could leave both vulnerable to criminal liability.

DOJ announced yesterday that it was beginning an investigation of both current and former officials who may have been involved in schemes to interfere with the election, and the Senate Judiciary Committee is planning a separate probe (Greenwire, Jan. 25).

Federal prosecutors could pursue a conspiracy charge, even if they can’t prove claims of election interference, Shanlon Wu, a former federal prosecutor, said in a recent interview with CNN.

"Of course they’re going to argue executive privilege and legal privilege, and I think that Clark has already raised that, but I don’t think that’s ultimately going to be successful," said Wu, who is now an attorney at the boutique law firm Wu, Grohovsky & Whipple PLLC.

"I mean, they’ll litigate it," he continued, "but telling the president that you want to get rid of the acting AG to install yourself — that’s not legal advice; that’s a political power play."