Who is Myron Ebell? 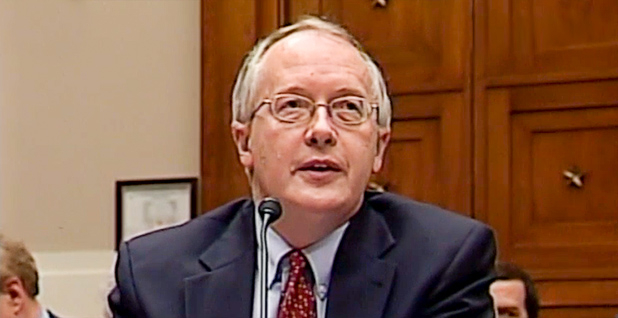 Myron Ebell, a senior fellow at the Competitive Enterprise Institute, testifies at a 2009 hearing on cap-and-trade legislation in the House. Ebell, a prominent climate change skeptic, is leading the U.S. EPA transition for the Trump administration. Photo courtesy of C-SPAN.

Andrew Moylan was about to make waves. So he arranged a meeting with Myron Ebell, to lay out his plan to push Republicans toward supporting a carbon tax.

Moylan was giving early notice to one of Washington’s biggest critics of climate science. He didn’t expect the bespectacled Ebell to lend his support. Still, Moylan described what happened next as "unusual."

The encounter, which occurred several years ago, encapsulates Ebell’s unmoving attitude against climate action or even a willingness to discuss it, according to people who have tried.

Now, after a career of advancing theories that question the scientific underpinnings of global warming, he is overseeing U.S. EPA’s transition into President-elect Donald Trump’s administration. It’s not lost on many observers, liberal and conservative alike, that Ebell is not a scientist and has never worked for the agency whose environmental mission he has attacked for years.

Environmentalists have called his selection a "sick joke." Even some Republicans wonder how someone who has spent most of his career at the Competitive Enterprise Institute, a conservative think tank, could be thrust into a prominent role that includes interviewing agency staff, identifying potential employees and designing a new direction for EPA under a president who has threatened to shrink its authority.

"Given that Arrhenius sussed out the mechanics of global warming in the 19th century, it’s kind of sad that we have a physics denier leading the environmental transition for a 21st-century president," said Bill McKibben, founder of 350.org, an environmental group leading efforts to end the use of fossil fuels.

He was referring to the Swedish physicist Svante Arrhenius, who in 1896 pioneered the "greenhouse law," a mathematical formula that is still used to calculate carbon dioxide’s impact on temperatures.

Ebell declined to comment for this story. But it’s likely that he would welcome a debate with McKibben about how much the Earth is warming, or not warming, because of human activity. It’s also plausible that Ebell would feel victorious at the end.

Those who know him shrug off the idea that Ebell is a hired gun for the fossil fuel industry. He’s a true believer, they say.

Professionally, he’s fought with lawmakers and criticized the pope. He’s declared war, and victory, over climate advocates. And he takes partial credit for convincing Republicans to avoid action on warming.

Away from work, Ebell is married to a Sunday school teacher, and he has four grown children. Along the way, he has stumbled financially on his house and with the IRS.

Before all of that, he was a bookish kid who shot mule deer.

A homestead on fire

Ebell grew up in the sagebrush hills of eastern Oregon, in a town settled by gold miners at the beginning of the Civil War. Baker City is nestled in a small bowl at 3,500 feet, and tall mountains climb toward the sky in most directions.

It’s closer to Idaho geographically, and politically, than to the liberal coastline and Portland. Ebell would have seen the strong influence of the federal government, which owns more than half the land in Baker County, on policies affecting cattle grazing, land access and wildfire.

To this day, Ebell criticizes the "bicoastal urban elite" who insist on being "hysterical" about the idea that climate change affects everything from storms to drought. Environmentalism isn’t about protecting nature, he has said, but about advancing "eco-imperialism."

The Ebells homesteaded their Oregon farm in the 1860s. It grew to several thousand acres, and to this day, a creek and other features carry his family name. Ebell’s childhood property, named Sky Ranch, is still in the family. Much of its evergreen forest burned in a wildfire last August.

Ebell was there, watching the trees crackle with flame from the base of small Cassidy Mountain at his cousin’s barn lot. He blamed the government, not climate change. Mismanaged federal forests left too much tinder in the mountains, and rules preventing roads slowed response times, said John Ebell, the cousin.

"He knows what the problems are," he said of Myron.

As children, they sometimes hunted deer together and rode horseback. They grew apart in high school because of divergent interests. Myron was focused on "learning and book reading," said John Ebell, who preferred fixing tractors and other machinery.

Ebell left his family’s remote mountain home in 1971 to attend Colorado College. But he carried his childhood convictions with him.

After graduating, he attended the London School of Economics, where he earned a master’s degree, according to a two-page biography written by Ebell. He appears to have been unhurried during that period of his life, taking postgraduate classes at Cambridge University and the University of California, San Diego.

The first professional job Ebell lists on his biography is assistant to the chairman of the National Taxpayers Union. News reports suggest that occurred sometime in the late 1980s.

By 1990, then in his late 30s, he was representing the National Inholders Association as a lobbyist. The group fought against federal policies on behalf of people with cabins and other property in national parks and forests — so-called inholders.

It was then that Ebell first tussled with former Rep. Barney Frank, the Democratic gay lawmaker from Massachusetts.

Ebell arranged for himself to testify, at the last minute, about private easements to public lands. At one point, he called environmental groups "radical," and Frank, who was acting chairman of the subcommittee, pushed him to cite those that were and were not on the fringe.

Ebell: "Well … some are more radical than others."

Frank: "Why don’t you start with the most radical and we’ll go from there."

He kept appearing in Congress, though usually in the audience. In 1994, Democratic Senate staffers summoned three U.S. Capitol Police officers when Ebell refused to remove fliers from a press table describing Interior Secretary Bruce Babbitt as secretary "of the inferior." Ebell was verbally reprimanded.

Six months later, in early 1995, Ebell showed his willingness to antagonize authority again. This time, he poked the top Republican. In a leaked memo, he claimed that House Speaker Newt Gingrich (R-Ga.) was going to be a "big problem" on loosening the Endangered Species Act. The memo said Gingrich has "soft feelings for cuddly little critters."

Ebell also served as a legislative assistant to former Rep. John Shadegg (R-Ariz.) and as policy director at Frontiers of Freedom.

At about that time, Ebell and his family ran into financial trouble. Public records show that his house in Prince George’s County, Md., was foreclosed on in 1996. He had purchased it eight years earlier for $130,000. The Maryland Department of Assessment & Taxation lists the current owner as Citicorp Mortgage Inc., but court records from last year involving the bank say Ebell and his wife "are the owners of the property."

Ebell and his family still live in the house.

His finances were again pulled into public view in 2011, when the IRS applied a federal tax lien to his finances in the amount of $114,780. Court records indicate that Ebell satisfied that debt in 2013.

“I think he understands other people’s viewpoints. I think he just dismisses them.”

Ebell began working on climate policy in earnest just before he joined the Competitive Enterprise Institute in 1999.

A year earlier, he and 12 other people representing the fossil fuel industry and conservative groups wrote the "Global Climate Science Communications Action Plan." The memo by the American Petroleum Institute outlines a strategy to "undercut" mainstream findings on global warming. Its goal was to persuade journalists, teachers and others to highlight scientific uncertainties in climate change.

Over the years, Ebell has argued that warming is a good outcome, especially for Minnesotans and other northerners who face bitter winters. He said a report released this year by the National Intelligence Council is "filled with gems of junk science." And he promised to make the idea of a carbon tax politically "toxic" in 2012, so that Republicans would think twice before supporting initiatives like the one proposed by Moylan, of the conservative R Street Institute.

In person, Ebell sometimes talks with razor blades. Those who have dealt with him, even Republicans, say he tends to categorize people as adversaries or allies. There isn’t often an in-between.

He has been known to treat those on the right who accept the scientific underpinnings of rising temperatures as "traitors" and "enemies," according to sources.

"He’s very Orwellian," said one Republican. "If there’s a Republican who wants to be constructive [on climate policy], they’re an enemy."

Some believe that Ebell’s dissenting voice can benefit serious discussions about climate action. One Republican, who believes that warming deserves Congress’ attention, said meaningful legislation should be shaped by everyone in the debate, even those who question the science.

"I think his value is that he shares such a passion. It will help thread the needle" on drafting policy, the Republican strategist said. "You need both opposing viewpoints to get to the art of the possible."

To others, Ebell seems to be eagerly impolite, especially in the world of think-tankers who are used to having their ideas challenged, if it happens, in a starched-shirt kind of way.

That’s how Moylan sees him, even after the meeting in which Ebell promised to fight his carbon tax idea tooth-and-nail. He describes Ebell as a smart, honest, and "exceedingly interesting" person. He also happens to be rigidly adhered to his worldview.

"I think he understands other people’s viewpoints; I think he just dismisses them," said Moylan.