Who makes the turbines? In Northeast, battle heats up 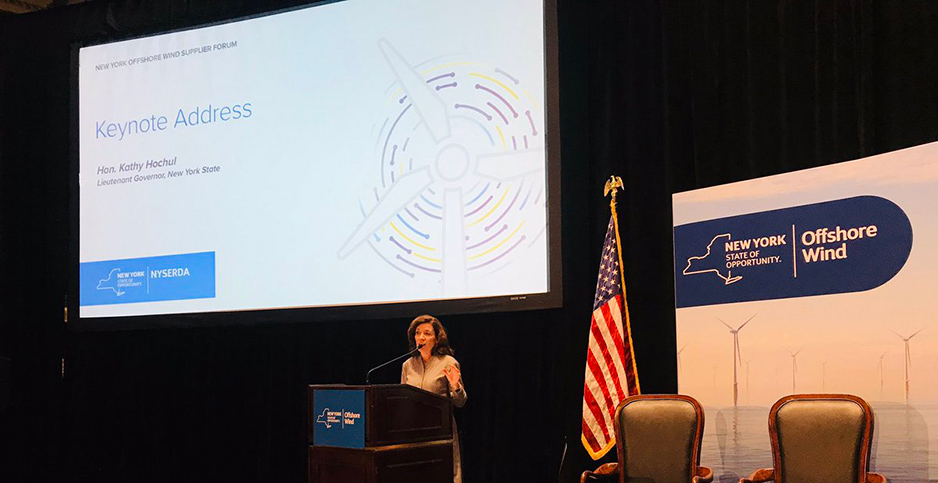 The idea behind the forum, one soon to be replicated in New Jersey, was to introduce global project developers, turbine and cable manufacturers, and others to the people who could staff and supply their U.S.-based projects.

"We really believe our state is positioned to assume the mantle here, and that’s our goal going forward," Lt. Gov. Kathy Hochul said in a keynote speech.

"We can talk all day about how important this is, but we really need you to make the deals," she added.

It coincided with the release of a road map from the National Offshore Wind Research and Development Consortium — a collaboration among the Energy Department, New York and offshore wind consultants — pointing to the main areas of need for research.

That research, ultimately meant to make the industry more stable and less costly, will partly aim at making wind turbines and plants hardier, more adaptable and more productive. It will also try to cut costs associated with gathering knowledge about suitable sites and installing and maintaining projects.

Close to $50 billion in contracts and 10 gigawatts of power are in the works for 2030 on the East Coast. But another topic for the consortium’s researchers, the growth of domestic supply chains, was a recurring one at the forum, with industry executives underscoring it as a necessity.

"For a multitude of reasons, a local supply chain has to happen," said Lars Thaaning Pedersen, a former executive at Dong Energy and current CEO of Vineyard Wind LLC. "The good news is, I think it is happening," largely on the strength of the 10 GW of demand established in state goals.

"A lot of people believe that the market is here and it’s going to be sustained," he said.

Officials and consultants for the state think that if New York can magnetize investment early on — particularly in manufacturing — local suppliers could stake an early claim over that work, sending turbines; turbine parts; and "lower-tier" products like steel, fiberglass and copper wire to wind farms up and down the Eastern Seaboard.

The same, of course, could go for rival suppliers in other states.

Officials were also quick to boast of the years of planning undertaken by the administration of Democratic Gov. Andrew Cuomo, which has effectively drawn up a statewide industrial policy.

One official said the state’s evaluation of possible port facilities — a key area for developers, who may not place a bid in a state until they have an idea of where they could set up shop — analyzed some 60 locations.

Richard Kauffman, chairman of energy and finance for Cuomo, said he was "pleased other states have followed our lead" on offshore wind. "But New York’s record and commitment should send a strong message that we want the state to be the hub of the offshore industry.