Who needs Paris when you have Pittsburgh? 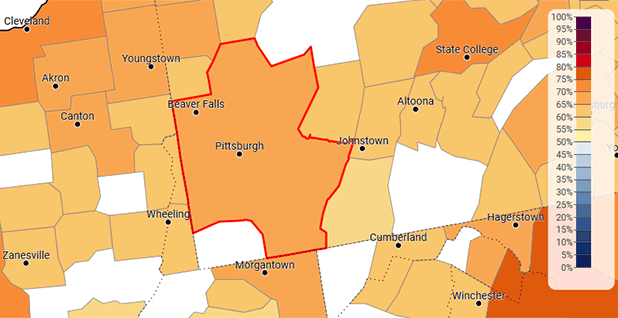 It was the catchiest phrase of President Trump’s speech announcing the U.S. withdrawal from the global climate pacts, and to the people of Pittsburgh, it was laughable.

"I was elected to represent the citizens of Pittsburgh, not Paris," the president said, in what was deemed not only a poor alliterative choice, but perhaps the least apt example of a city that wants to see the U.S. exit from the global accord.

"Well I’m a guy from Pittsburgh, and he’s not representing me," said Court Gould, executive director of Sustainable Pittsburgh, an advocacy group that cultivates environmentally friendly ways to grow the economy in the onetime coal capital of America.

"Fact: Hillary Clinton received 80% of the vote in Pittsburgh. Pittsburgh stands with the world & will follow Paris Agreement," wrote Peduto, who attended the 2015 Paris talks with 500 other world mayors and who plans to sign an executive order today recommitting his city to the global targets.

"He got beat rather badly here," Rep. Mike Doyle (D-Pa.), who represents Pittsburgh and 72 of its suburbs, said of Trump. "I think like maybe close to 4-to-1."

But Pittsburgh didn’t just reject Trump at the ballot box, it decided decades ago to turn away from the president’s dated vision of what defines an American manufacturing town, Doyle said. Pittsburgh has moved beyond its "hell with the lid off" days of dead rivers and dirty air, pollution so bad that children are still hospitalized for asthma attacks at alarmingly high rates.

Trump "obviously doesn’t understand Pittsburgh," Doyle said. "I’ve lived in Pittsburgh all my life. He apparently hasn’t been here recently to witness the transformation that’s taken place in our city.

"For us to give up our leadership on this issue and to not even have a seat at the table is incredible shortsighted. And it’s certainly not going to benefit the city of Pittsburgh," he said. "We’ve moved on, and Pittsburgh is now eds and meds, it’s robotics, it’s green energy. This is a city that’s been transformed and looking to the future, not the past."

It’s so green now that the Sierra Club is showcasing Pittsburgh in its effort to get 30 U.S. cities operating on 100 percent renewable energy by 2035, said the campaign’s leader, Eva Resnick-Day.

"Our goal is to have the city commit to and plan for and transition to 100 percent clean and renewable energy by 2035, to be the first industrial city in America to be powered by renewabale energy," she said. "If a town that once was defined by fuel and coal is able to move to 100 percent clean energy, what city couldn’t? We’ll continue to make an example of the incredible work that Pittsburgh has been doing and will continue to do into the future to become more sustainable."

The president’s speech was so out of tune on Pittsburgh that whoever wrote it missed the same-day editorial in the Pittsburgh Post-Gazette, which called on Trump not to leave Paris.

"There’s a loud growing chorus in the corporate world that understands that addressing climate change is not only the right thing to do, but is the right, imperative business thing to do," Gould said. "The city of Pittsburgh is a global go-to town for having its eye on the cleaner, greener, more equitable new economy of the future."

There’s "an economic future in technologies from solar and wind to frontiers unknown," the paper wrote in the editorial. "American energy corporations know that coal, while still embedded in our economy, is not a viable fuel for the long term.

"If the United States pulls out of the Paris accord, it simply won’t have a place at the table to negotiate the future of energy production and consumption and its effect on economic development," the paper added.

Peduto yesterday was among 60 other U.S. leaders who signed a letter vowing after Trump’s announcement to reaffirm their commitment to reducing emissions and other Paris targets.

"We will continue to lead. We are increasing investments in renewable energy and energy efficiency. We will buy and create more demand for electric cars and trucks. We will increase our efforts to cut greenhouse gas emissions, create a clean energy economy, and stand for environmental justice," they wrote in their letter.

Pittsburgh didn’t look to the past to rebuild its future when the steel industry collapsed in the 1980s, Peduto told MSNBC’s Chris Matthews on "Hardball." The city rebuilt its economy in a way that "also cleaned our environment," he said.

"Pittsburgh is basically the best example of a city that you could use to talk about what the Paris Agreement had the potential to do — and will have the potential to do," he said. "For the president to choose Pittsburgh and to say that he’s representing us is a far stretch at best."