Who pays for one of the costliest cleanups ever? 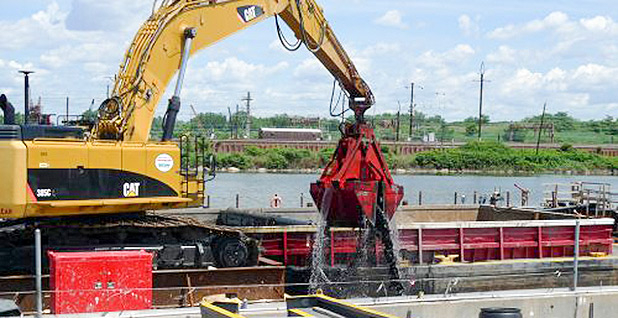 A dredge removes sediment from an area with high dioxin concentrations on the Passaic River in Newark, N.J. National Oceanic and Atmospheric Administration

Lurking under the surface of the lower 8.3 miles of New Jersey’s Passaic River are blue crabs, fish and tens of thousands of pounds of cancer-causing contaminants.

The Passaic is one of the nation’s most polluted rivers. And it’s expected to see one of the costliest cleanups ever under U.S. EPA’s Superfund program.

The estimated $1.4 billion cleanup cost falls on the shoulders of over 100 companies that have contributed to the river’s contamination over the years.

But apportioning the expenses — and forcing companies to pay up — isn’t easy and wades into complicated legal waters.

EPA last year reached a $165 million settlement with Occidental Chemical Corp., or OxyChem, one of the liable parties responsible for the former Diamond Alkali factory on the Passaic in Newark, which produced the Agent Orange herbicide in the 1960s (Greenwire, Oct. 6, 2016).

But OxyChem has accused another one of the responsible parties — Maxus Energy Corp. — of trying to get out of its monetary responsibilities through a bankruptcy declaration.

Maxus, formerly known as Diamond Alkali Co., was acquired by Argentina’s state-owned oil company, YPF SA, in 1995 and declared bankruptcy in 2016 shortly after being named by EPA as a responsible party in the cleanup.

Both federal and state lawmakers are seeking action and answers in the case.

New Jersey Democratic Sens. Cory Booker and Bob Menendez wrote a letter last month to Argentina’s ambassador to the United States, asking for assurance that YPF will pay its share of the cleanup cost.

And the New Jersey Senate last month approved a resolution asking for an investigation into the Argentine company, alleging that it declared bankruptcy to avoid paying its share of the Superfund cleanup fees.

The call for an investigation found support among Republicans, Democrats, the chemical industry and environmental groups.

According to state Sen. Bob Smith (D), who leads the Senate environmental committee, litigation uncovered a 1996 memo that laid out Maxus’ plan to file for bankruptcy so it could evade Superfund payments.

"It appears to me that it lays out a plan to divest their assets in an overall scheme not to pay environmental liabilities," Smith said at a hearing on the issue.

YPF’s public relations firm responded to inquiries with a statement the company passed out at the legislative meeting that accuses OxyChem of "trying to shift [the financial] burden to someone else."

"This entire matter could be resolved amicably if Occidental would fulfill its obligations, rather than wasting money on pointless litigation and pointing fingers at a responsible corporate citizen that has spent millions of dollars toward remediation of pollution it did not cause," the statement said.

The statement said that during Maxus’ bankruptcy process, YPF offered to pay over $130 million toward environmental remediation projects.

When OxyChem merged with Diamond Shamrock in 1986, it became responsible for all the contamination the facility produced, YPF argued.

Up until last month, YPF had disavowed any obligations to the Superfund costs in Maxus’ liquidation plan. It dropped its objections to the plan, which spells out how to use its assets for the cleanup, but a YPF lawyer indicated the company is "fully prepared to litigate" with Maxus’ creditors over the cleanup payments.

OxyChem and Maxus aren’t alone in the cleanup. The list of more than 100 responsible parties includes many big-name companies, like Sherwin-Williams Co., General Electric Co. and Monsanto Co.

But Maxus is "holding a lot of the bag" on this, said Debbie Mans, executive director of NY/NJ Baykeeper.

To many observers, the case raises a question of precedent.

Steve Gold, a professor at Rutgers Law School, recently testified to state lawmakers that it is not surprising the federal Superfund law doesn’t jibe with bankruptcy law. Bankruptcy provides the framework to relieve debtors of certain financial obligations and give them a fresh start, he said.

"The desire of entities facing Superfund liabilities to seek to limit the exposure of their assets to those liabilities is understandable but must be subject to existing legal constraints," Gold said.

Gold said he could not comment specifically on the case of Maxus.

"The limited information I have been able to review, however, raises red flags that, at the very least, in my opinion warrant serious inquiry," he said.

A representative from OxyChem was more blunt.

"YPF should not be allowed to profit from American capital markets at the same time it seeks to avoid paying its fair share of Superfund environmental costs in New Jersey and elsewhere in the United States," said Frank Parigi, vice president of OxyChem affiliate Glenn Springs Holdings Inc.

The state resolution also would call on the federal Government Accountability Office to look at current Superfund obligations tied to foreign, state-owned corporations to determine whether they are trying to avoid payments.

The road to Superfund

The Passaic’s pollution dates back to the 1960s, when the Diamond Alkali Co. plant in Newark produced Agent Orange and other toxic pesticides.

"Employees were just shoveling the waste off of the bulkhead into the river," Mans said.

Contaminants present in the lower part of the river include dioxin, mercury and polychlorinated biphenyls, or PCBs.

There is no plan yet for the upper 9 miles of the river, which is also a part of the Superfund site. Already, the river has experienced two cleanups requiring bank-to-bank dredging to remove the toxic mud at the bottom of the river.

The most recent federal tests of the river are from 2010 to 2015, and they show that the lower 8 miles of the river contains contaminants that pose risks to human and environmental health.

Advisories on fishing and crabbing have been in place since 1984, when the river was declared a Superfund site, and the New Jersey Department of Environmental Protection still warns people against taking crabs from the area (Greenwire, July 16, 2014).

Dioxin absorbed in the bloodstreams of these animals cannot be cooked out, DEP warns. State fines for first-time offenders found catching and eating the crabs range from $100 to $3,000.

Political factors could also play a role in the cleanup fight.

EPA Administrator Scott Pruitt has put the Superfund program at the top of his priority list. He will personally make decisions regarding sites that cost $50 million or more to clean up — including the Passaic River site (Greenwire, May 11).

President Trump’s fiscal 2018 budget request would cut the Superfund program’s funds by about 25 percent, worrying environmental groups, which say cleanup costs could then fall on taxpayers.

"As long as Trump and Pruitt are in charge, there’s not a snowball’s chance in hell that polluters will be forced to pay for cleaning up their toxic messes that endanger Americans’ health," said Environmental Working Group President Ken Cook.

The $165 million from OxyChem will fund the cleanup design, which is expected to take four years. After the planning stage is complete, the lower 8 miles will undergo a six-year implementation period.

NY/NJ Baykeeper’s Mans said that only if the cleanup process becomes jeopardized by the responsible parties’ fighting will the community need to get involved.

"From a public perspective, as long as it’s getting done and it’s getting done the way EPA and we advise it should get done, then who is paying for it — that’s not our problem, to put it bluntly," Mans said. "You are all responsible, individually and together."