Who stands behind Suniva’s trade case? 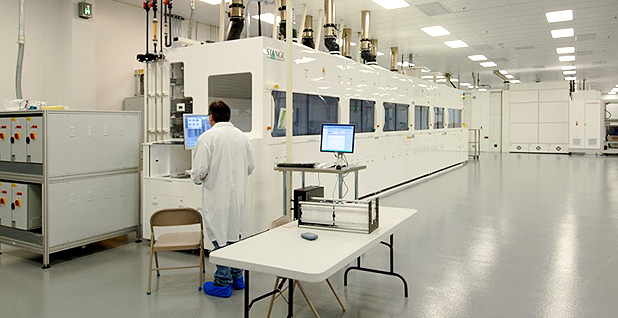 A bankruptcy filing that set the trade case in motion is signed by Suniva’s Chinese president and four members of its board, who are also Chinese. In fact, Suniva is 63 percent owned by a Chinese conglomerate, Shunfeng International Clean Energy, and in bankruptcy has become deeply indebted to another Chinese company.

It’s just one of several strange twists in Suniva’s story that raises questions about who is in charge at Suniva, what motivated the company to file its momentous case and who stands to benefit if it wins.

In bankruptcy, further wrinkles have appeared. A capital group out of New York, SQN Capital Management LLC, which is funding Suniva’s work during its bankruptcy proceedings, has staked the outcome on the case before the ITC. It stands to gain a huge ownership stake and half the increase in stock price if the trade case wins.

The company was founded on "a belief that the marketplace needs a strong, American-based manufacturer," Matt Card, the company’s executive vice president, said in a speech.

That speech was given at a 2016 ceremony where the Georgia Department of Economic Development named Suniva "Manufacturer of the Year." The ceremony, attended by Gov. Nathan Deal (R), was a sign of Suniva’s growing stature in the state.

Until recently, Suniva’s story was one of American improvisation and grit.

Suniva’s strategy was to pioneer highly automated manufacturing techniques that could keep costs down while making a higher-quality cell that could be sold at a small premium, Stephen Shea, the former chief engineering officer of Suniva, said in an interview.

Support also came from the Department of Energy, which granted Suniva $8.8 million through a manufacturing-technology initiative from DOE’s SunShot program, which aims to lower solar costs. It also got a green light from the Obama administration for a $141 million loan guarantee to build a second module-manufacturing plant. In the end, Suniva declined the loan guarantee and built the plant in Saginaw, Mich., in 2014 with private money.

Suniva landed big customers, placing its panels on the hangars at the Quantico, Va., base that house the president’s helicopter, Marine One. Its arrays power NRG Energy Inc.’s sports complex in Houston, the Whole Foods flagship store in Austin, Texas, and the main airport in Chattanooga, Tenn.

Then Chinese firms began to play a key role in both Suniva’s expansion and its undoing.

In 2014, it acquired Wuxi Suntech, which once was the world’s largest solar photovoltaic manufacturer, and which has its own painful American misadventure.

In 2010, Suntech built a solar panel assembly plant in Arizona but closed it three years later — ironically because the U.S.’s 2012 tariffs against Chinese solar firms made it too expensive to import its own cells and modules. In 2013, the American subsidiary declared Chapter 15 bankruptcy and was delisted from the New York Stock Exchange.

This means that Shunfeng’s Chinese solar arm, Suntech, may not be among the importers that caused its American arm, Suniva, to go bankrupt.

In March 2016, after Shunfeng’s financing came through, Suniva underwent a sudden change of management. The co-founder and CEO, John Baumstark, was let go and replaced by Cheng "Alex" Zhu, the president of Shunfeng’s American branch and a former executive of Suntech. Other senior executives were also asked to leave, said Shea, the company’s former engineering chief.

What Suniva didn’t count on was that the rock-bottom prices for imported solar panels would go lower still.

The U.S.’s 2012 tariffs against Chinese and Taiwanese solar manufacturers caused a pause. By late 2016, as Suniva’s expanded plant was starting up, even cheaper cells and modules were finding their way to the U.S. from Thailand, Vietnam, Malaysia and Canada.

"That dynamic of following the falling money has been a dynamic of the market as long as I’ve been there," Shea said.

Wells Fargo was a major lender. In February, with a default looming, Suniva tried to find additional financing but was unable to locate a savior. It was losing money, and potential investors were scared off by Suniva’s insistence that it seek relief by filing its trade case with the ITC, bankruptcy documents said.

Suniva soon defaulted on its Wells Fargo loan. In response, Wells Fargo invoked a $15 million letter of credit from Wanxiang America Corp., the U.S. arm of a Chinese automotive conglomerate that was an earlier investor in Suniva. This immediately made Wanxiang one of Suniva’s largest creditors.

It is unclear what role, if any, either Shunfeng or Wanxiang are playing in Suniva’s trade case.

In Shunfeng’s 2016 annual report, its auditor said that the company incurred a $37.5 million loss on its Suniva acquisition due to "severe financial difficulty experienced by Suniva and certain unfavorable factors expected by the management."

In return, SQN proposed to receive options to acquire 40 percent ownership in Suniva and to get 50 percent of any increase in value in the company’s shares that result if the trade case is approved by the Trump administration.

"These terms would seem to me a trifle onerous," said Joel Glucksman, a corporate bankruptcy attorney who reviewed Suniva’s filing at the request of E&E News.

Suniva’s bankruptcy filings also raise questions about its claim that it sourced its content from the U.S. The company’s website, which has been taken offline, touted Suniva’s "Buy America" standard, which is often required in public-works projects.

"Suniva is one of only a few U.S.-operated manufacturers that offer Buy America-compliant modules, which contain more than 80% U.S. content. Our premium solar modules have one of the highest percentages of U.S. content in the industry," Suniva wrote. "Suniva’s GA and MI based module assembly facilities offer even greater value to customers requiring ‘Buy America’ solar products."

Bankruptcy documents say that the company’s commercial creditors are overwhelmingly from abroad.

The company’s second-largest debt, $4.97 million, is to Woongjin Energy Co. Ltd., a Korean company that makes solar wafers, which are the basis for modules.