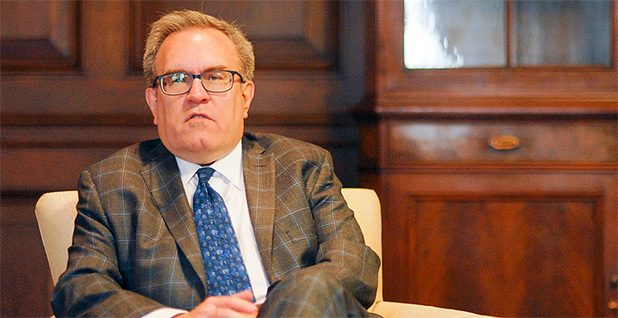 The acting EPA administrator is — in no particular order — a fan of Dolly Parton, Paul Ryan and Lisa Murkowski.

But social media offer another window into his beliefs and preferences, on subjects ranging from music to politics.

He also "likes" the Committee for a Constructive Tomorrow, which was formed as a free-market group but has since focused its efforts on the denial of mainstream climate science.

His Facebook presence became a point of contention during his Senate confirmation process for deputy administrator, according to emails released to the Sierra Club through the Freedom of Information Act (Climatewire, June 14).

Wheeler had said of then-presidential candidate Donald Trump, "no one really knows what his political beliefs are," he "doesn’t understand how the government works," and "he is a bully."

EPA Chief of Staff Ryan Jackson strategized with EPA’s press office about a response, saying it was important to know the context of the post.

Wheeler clarified that he wrote the post while working for Florida Republican Sen. Marco Rubio’s presidential campaign, and he had since switched his support to Trump after seeing Trump speak at a rally.

On Twitter, Wheeler has maintained a personal account since April 2009, a few months after he left his post as a senior staffer for Sen. Jim Inhofe (R-Okla.) to become a lobbyist with Faegre Baker Daniels Consulting.

In February 2017, Wheeler launched a professional account. As of this morning, the account had more than 60,000 followers and only a single tweet sharing his interview with The Wall Street Journal.

His private account has attracted some scrutiny from The Daily Beast, which reported in April that Wheeler had publicly defended alt-right troll Milo Yiannopoulos.

In August 2016, Wheeler defended Yiannopoulos after the latter had been banned from Twitter for harassing "Saturday Night Live" actress Leslie Jones.

In a now-deleted tweet, Wheeler linked to a six-minute video titled "The Truth About Milo" that was produced by InfoWars editor-at-large Paul Joseph Watson, who said in the video that conservatives could be "banned from using the internet altogether if they trigger your butthurt."

By and large, Wheeler’s Twitter presence is that of a credentialed conservative and skeptic of the Obama administration’s climate policies.

In April 2009, he said in a tweet, "Climate alarmists refuse to debate or leave their facts at home when they do" (Climatewire, July 9).

In June 2015, he tweeted, "Commemorating Obama’s Climate Action Plan Thanks ACCCE for cupcakes #AllPainNoGain" along with a picture of cupcakes decorated with the slogan "#AllPainNoGain," an apparent jab at President Obama’s broad plan to cut carbon pollution. (ACCCE stands for American Coalition for Clean Coal Electricity, a trade group.)

And in November 2015, he echoed President Trump’s disdain for liberal media outlets, tweeting, "Just watched most biased panel in years on #meetthepress thought it was msnbc for a minute."

‘The bar is very high’

As Wheeler settles into his role today, watchdog groups are examining his statements on social media platforms like Facebook and Twitter for potential conflicts of interest.

Sierra Club spokesman Adam Beitman said the group previously did some digging on social media when Wheeler was nominated for EPA’s No. 2 spot and will continue to scrutinize his activities through the Freedom of Information Act.

Austin Evers, executive director of American Oversight, said the group hasn’t found anything that would represent a conflict of interest so far.

But the group remains focused on Wheeler’s time as a lobbyist at Faegre Baker Daniels Consulting, where one of his top clients was coal mining executive Bob Murray, who is currently pushing the Trump administration for favorable federal treatment to bail out struggling coal plants. Wheeler’s recusal statement as deputy administrator, obtained by E&E News, shows he pledged to stay away from his former lobbying clients, including Murray Energy Corp. (Climatewire, July 2).

"It’s not a conflict of interest or an ethics problem for Wheeler to have anti-Obama administration views," Evers said. "What raises a concern is that he used to work for Murray Energy, and Murray has been going around the administration with a wish list of regulatory changes."

He added, "That’s the thing the American people should be most concerned about. We have a right to an impartial, good-faith government. And I think after Scott Pruitt, the bar is very high for Wheeler on how he needs to comport himself in office."