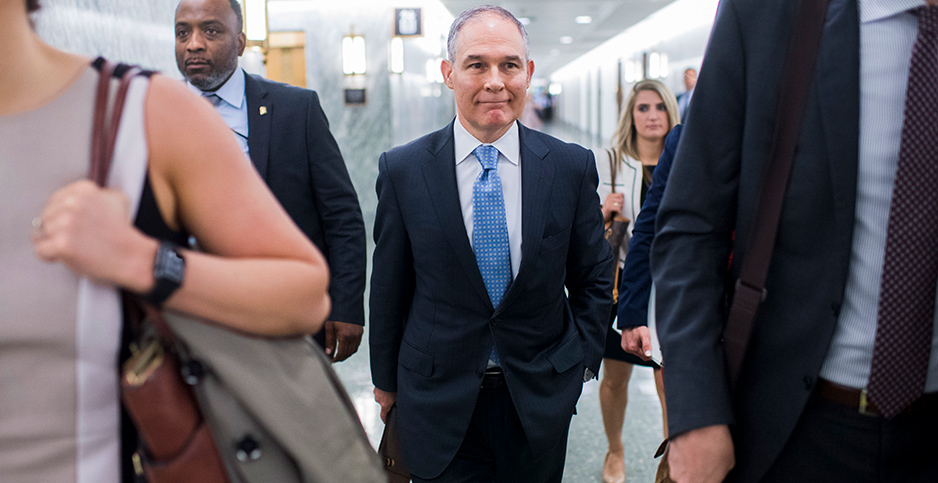 You may wait a long time to see who is contributing to EPA Administrator Scott Pruitt’s legal defense fund.

Like other federal officials, the EPA chief is required to report gifts, like travel and tickets to events, he has received on his public financial disclosure report. That also includes contributions to the legal defense fund established for his benefit, according to guidance on the Office of Government Ethics’ website.

But those reports are filed just once a year. If Pruitt’s legal defense fund was created this year, he will report contributions as gifts on his financial disclosure report covering the 2018 calendar year. That report isn’t required to be filed until May 2019 at the earliest.

"We’re not going to find out until a year after the fact," Craig Holman, a government affairs lobbyist with Public Citizen, told E&E News. "That is ridiculous lag time. … An entire legal matter could be completed before we find out who his donors are."

If Pruitt created the fund in the 2017 calendar year, you will still be waiting to find who its donors are. Tuesday was the deadline to file that year’s financial disclosure report, but the EPA chief, like past administrators, was granted a filing extension, along with more than 70 agency employees.

"Administrator Pruitt was one of the employees who sought and was granted an extension," said Kevin Minoli, EPA’s principal deputy general counsel and designated agency ethics official, in a statement.

In response to frequently asked questions on reporting gifts, OGE said contributions to legal defense funds should be reported.

"Report gifts to a legal defense fund totaling more than $390 from a single source that were received during the reporting period for a fund established for your benefit," says the agency on its website. That includes naming the source of the contribution, as well as its city and state, what fund received the contribution, and its value.

At a Senate hearing yesterday, Pruitt confirmed that he has created a legal defense fund as he grapples with multiple investigations into his pricey travel, ramped-up security and rent of a Capitol Hill condo linked to a lobbyist whose firm’s clients have business before EPA. He said that he wouldn’t accept donations from lobbyists or corporations that have interests related to the agency and that he would disclose the fund’s donors (E&E News PM, May 16).

"They will be published, yes. Pursuant to the requirements of disclosures, yes," Pruitt said.

Cleta Mitchell, a partner at Foley & Lardner LLP and a Republican election law attorney, reportedly helped Pruitt set up his legal defense fund. She didn’t respond to a request for comment from E&E News.

The EPA boss could voluntarily disclose his legal defense fund’s donors before he files his next financial disclosure report, although it’s not clear whether he plans to do so. EPA press officials didn’t respond to questions from E&E News on whether Pruitt of his own accord would release the fund’s contributors to the public on a periodic basis.

Kathleen Clark, a law professor at Washington University in St. Louis who specializes in ethics, said Pruitt should voluntarily disclose his fund’s donors.

"More timely disclosure is essential in this case," Clark said. "The one thing we know is we can’t trust secrecy at this EPA. Scott Pruitt has proven he is not worthy of our trust."

Other ethics experts agreed with Clark.

"Given how many potential sources of donations would be prohibited due to the nature of EPA’s regulatory work, I’d like to see Pruitt voluntarily set up some enhanced transparency measures," said Walter Shaub, a former OGE director and now senior director for ethics for the Campaign Legal Center.

Holman has pushed for greater regulation of federal officials’ legal defense funds, sending a letter to OGE last September asking for contribution limits, online disclosure of donors, and banning contributions from lobbyists and others who have business before the official’s agency.

OGE had already said in its own memo that month that the legal defense funds should not accept anonymous donations.

Further, in response to lawmakers’ questions about a legal defense fund set up for President Trump’s White House aides, the federal ethics office said in a letter this April that while it doesn’t approve or disapprove of specific legal defense funds, it does provide guidance to agency officials to make sure their funds operate in line with the government’s ethics rules. That help from OGE includes providing a template of how to establish a legal defense fund.

Shaub said the person running Pruitt’s legal defense fund should be in close contact with EPA ethics officials to make sure the fund’s actions don’t conflict with regulated entities.

"The fund’s trustee is supposed to coordinate with agency ethics officials to make sure no donations are accepted from prohibited sources," he said.

"Unfortunately, recent events have left me worried about whether EPA’s lead ethics official has enough influence over, access to or independence from Pruitt to have a great deal of confidence in his ability to keep Pruitt from accepting such donations."

Clark said she was worried about obscure shell companies donating to Pruitt’s fund that would not truly disclose who his real donors are.

"Given the sensitivity of this kind of situation, the jeopardy that Pruitt is in, the reason that he has to be very grateful to who donates to his fund, that lag time is insufficient and puts the public interest at risk," she said.

"It may be OK with some federal officials, but in this the case, it’s not. It may be legal, but it is really problematic and worrisome."

As the investigations have piled up at EPA, the administrator has gotten some outside help.

Politico reported yesterday that Paul Rauser, partner and co-founder of Aegis Law Group LLP, has been advising Pruitt as he deals with the various reviews. Rauser didn’t respond to a request for comment from E&E News.

Holman said Pruitt likely needs the legal advice from an outside lawyer as well as financial help from a defense fund.

"If anyone needs a legal defense fund, it’s Scott Pruitt."