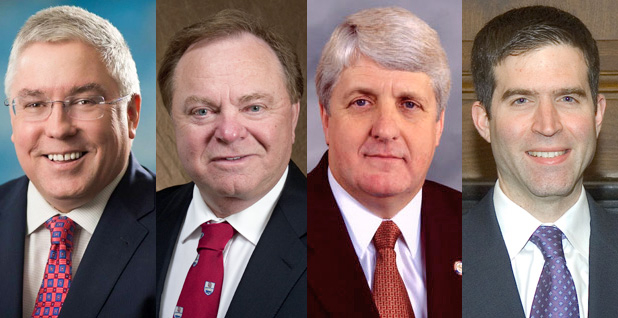 Donald Trump’s team will now officially start measuring the drapes in the Oval Office and throughout the executive branch.

Fresh off last night’s upset victory, in which the Republican toppled Democrat Hillary Clinton’s bid for the White House, the Trump campaign is shifting into full-fledged transition mode. There’s an all-hands meeting planned for this afternoon at the team’s transition headquarters in Washington, D.C.

What has been a small transition operation is slated to expand quickly now that Trump has clinched the presidency, and team members will soon be dispatched into federal agencies to interview officials, gather information and prepare detailed policy agendas. Meanwhile, shortlists of names for top Cabinet posts are being compiled, and interest groups, members of Congress and others will continue to press their preferences for key jobs.

One thing Trump insiders stress: The next administration will mark a drastic departure from past iterations of the executive branch. While Trump is already relying on some veterans in the energy world, and could pick some for top government jobs, there will be plenty of fresh blood in the mix.

"When he has been on the campaign trail, when he’s been talking about the need to ‘drain the swamp,’ for example, he’s looking for people to come in and solve the problems," said a source close to the Trump campaign. If the Trump team interviews candidates who say, "I’m not sure if we can actually do that," the source said, "I think there’s a strong likelihood that they might look at the person and say, ‘Next, please.’"

People familiar with the campaign are also expecting Republicans who were wary of throwing their support behind the GOP nominee to now come looking for jobs. "I think the vast majority of people out there who have been reluctant to publicly support Mr. Trump will be looking through their contact list and reaching out to people who they think are involved in the campaign in particular," the source said.

The Clinton team, meanwhile, has become the latest operation to have laid the groundwork for a government that will never materialize. Those who worked on the Clinton campaign or were already jockeying for top jobs in a Democratic administration will be looking for another line of work.

Mike Leavitt, a former U.S. EPA administrator who led Mitt Romney’s 2012 transition team, described in a recent interview what it’s like to construct an executive branch only to watch those plans dissolve.

"It was a profound disappointment. We built a great ship that never sailed," Leavitt said. "We had it down to 3 o’clock on the afternoon after the election we would start with decisions, and we had decisions teed up. And we went to election night thinking that at 3 o’clock the next afternoon, the following things would happen. … I woke up thinking, ‘Today is day 11; we would have done this, and we would have done that.’ I came to realize that every four years, somebody goes through this."

Meanwhile, Republican energy and environment circles are already abuzz with rumors about who’s in the running for top jobs. Here’s a look at who’s in the mix:

Trump has appointed well-known climate skeptic Myron Ebell to lead his EPA transition team and has promised to overturn the Obama administration’s climate policies. Trump has even floated abolishing EPA entirely, although that would likely be an uphill climb politically. At the very least, he’s expected to pursue dramatic reforms at the agency.

At the Energy Department, some sources expect an energy industry insider to become secretary, while others are pushing for Republican lawmakers with a deep knowledge of the inner workings of the complex agency. Energy lobbyist Mike McKenna is leading Trump’s DOE transition team.

Trump adviser and oil tycoon Harold Hamm is often cited as a leading contender for the agency’s top job.

A broad range of Westerners and public lands insiders are rumored to be in the running to lead the Interior Department. Former George W. Bush administration Interior official David Bernhardt is leading Trump’s Interior transition team.

Idaho Republican Gov. Butch Otter is one possibility for the job. The former Idaho congressman told E&E News in September that he would "be proud to serve in a Trump administration."

Other names floated include Tony Clark, a Republican commissioner on the Federal Energy Regulatory Commission who was previously chairman of the North Dakota Public Service Commission, and Pruitt, the attorney general of Oklahoma.

In addition to nominating a new chairman for the White House Council on Environmental Quality, the Trump administration is expected to keep the "energy czar" post that the Obama administration set up in the White House. Under Obama, the czar duties were given to Carol Browner, then Heather Zichal, John Podesta and Brian Deese.

A possibility for energy czar in a Trump White House could be Mike Catanzaro, a longtime Republican aide on Capitol Hill who is now an energy lobbyist and is helping to lead Trump’s energy policy transition team.

At CEQ, one name in the mix is Marty Hall, vice president of energy policy at FirstEnergy Corp. and former CEQ chief of staff during the George W. Bush administration.