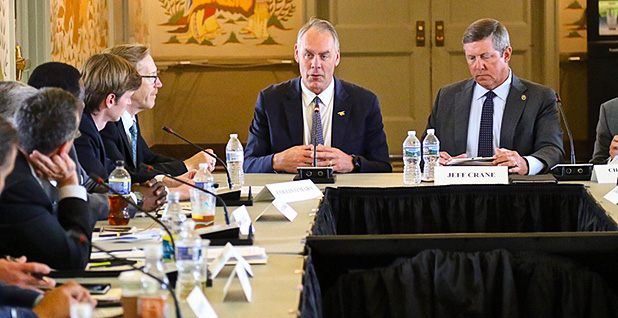 Interior Secretary Ryan Zinke publicized this July meeting of the Hunting and Shooting Sports Conservation Council on Twitter. His official calendar, though, is full of holes. @SecetaryZinke/Twitter

Interior Secretary Ryan Zinke’s schedule obscures whom he meets with and what he discusses.

The June entries don’t disclose the meeting topics or who attended them, aside from his aides. That’s a level of secrecy deeper than Zinke’s past calendars, and it’s unusual even among other Cabinet members.

"Ryan Zinke’s calendars are unlike anything I’ve ever seen before," said Austin Evers, executive director of the watchdog group American Oversight.

In lieu of a detailed calendar, internal records show that Zinke’s staff briefs him each day on his upcoming activities, said Aaron Weiss of the Center for Western Priorities. Weiss said that arrangement amounts to a "shadow calendar" designed to circumvent FOIA.

The calendar is supposed to serve as a proxy for Zinke’s priorities and a guide to who influences his decisions. June’s vague entries are the latest sign that Zinke has become more guarded after 18 months of congressional and media scrutiny, observers said — a trend that some have seen grow across the department.

The second-highest official at Interior, David Bernhardt, also obscures meetings in his calendar, and some FOIA requests for his emails have turned up empty. Other top officials, like chief of staff Scott Hommel, have begun to follow suit, Weiss said.

Democrats are vowing to crank up the pressure on Zinke if they retake the House (E&E Daily, Sept. 6). His shift away from transparency could hamper their ability to investigate him.

Shoddy records have already affected one investigation — the inspector general probe into allegations that senior staff were punished with reassignments for their political views Greenwire, April 11).

Information gleaned from public records has sparked investigations into Zinke, according to The Washington Post, while others have revealed industry playing a big role in Interior’s decisions, like how to shape national monuments.

Those experiences suggest Zinke is keeping information off his calendar because he knows it will become public, Evers said.

"It’s almost like this practice was a defense mechanism against the transparency he was forced to endure during his first months in office," he said.

For instance, Zinke’s calendar for October 2017 showed a meeting with former Rep. Duncan Lee Hunter (R-Calif.). But a key detail comes from the calendar of his then-deputy chief of staff Downey Magallanes: The meeting also included Hunter’s son, Rep. Duncan D. Hunter (R-Calif.), who was under investigation for embezzling campaign funds and has since been indicted.

It’s common for Cabinet secretaries to have two calendars: a schedule posted online and an internal one with more details. Both are public records.

Zinke departs from the norm by keeping information away from both of those places, Evers said. But it’s hard to peg that as illegal, he added, because the laws about documenting government activity differ from the laws about releasing public records.

Interior did not respond to a request for comment. Spokeswoman Heather Swift told CNN, which first reported Zinke’s omitted calendar, that the Interior chief has just one calendar, and she denied that the department was becoming less transparent. She said more information is available in meeting memos, which the department doesn’t release without a FOIA request.

Some hints do remain in his schedule. On June 28, Zinke’s calendar shows him arriving around 9 a.m. on Capitol Hill, holding two external meetings, then departing two hours later. Although the schedule doesn’t list whom Zinke met, it does list the office numbers for Reps. Ken Calvert (R-Calif.) and Betty McCollum (D-Minn.), the chairman and ranking member, respectively, of the Appropriations subcommittee that oversees Interior funding. McCollum’s office confirmed the meeting.