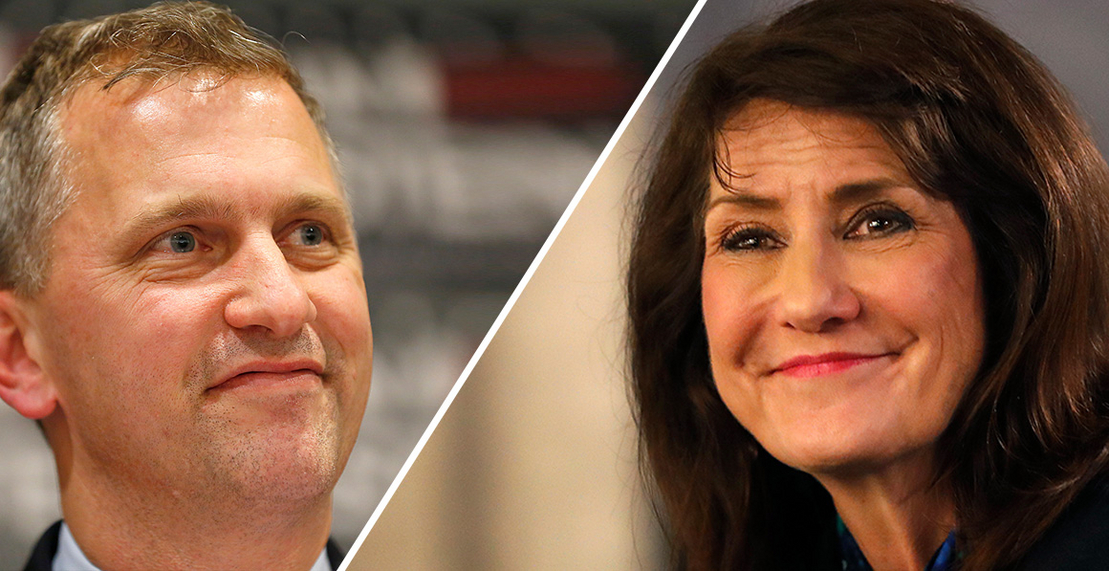 Climate change is taking a central role in a key House race in Illinois, where two Democratic incumbents are taking shots at each other’s records.

Rep. Sean Casten, a moderate who sits on the House Select Committee on the Climate Crisis and once led an energy efficiency company, argues that he holds the climate mantle in the race.

But Rep. Marie Newman, an outspoken progressive, in recent weeks has challenged Casten on climate, arguing he takes a narrow focus on the issue and is too close to corporate and fossil fuel interests.

The candidates are both running in the 6th District, due to legislative redistricting last year that put big portions of their previous districts together and forced them into an incumbent-on-incumbent primary (E&E Daily, Nov. 1, 2021). The primary election is June 28.

“People just have to assess, which model do you like better? Mine is very comprehensive, I think of it in all I do,” Newman told E&E News in an interview. “Sean tends to think of it in a little bit more of a silo. And we just have some disagreements about the tools that we use.”

She described Casten as a former “fossil fuel energy executive and lobbyist” — and as too focused on markets in fighting climate change. It’s a reference to his company, Recycled Energy Development, which Casten said carried out efficiency projects at power plants, including natural gas-fueled ones, and on whose behalf he testified at a 2007 House hearing.

Newman said she prefers to use “the rest of the toolbox, which is calling out polluters and addressing polluters and shutting them down.”

“It’s just a difference in approach,” she added. “I’m not here to criticize; I’m just laying out facts.”

Casten said he welcomes a fight over climate. He made climate one of his top focuses in his successful 2018 campaign against then-Rep. Peter Roskam (R) in his Chicagoland district.

“I’m in Congress because I have spent my entire life dedicated to trying to address climate change. That’s the only reason I’m here at the end of the day,” he said.

As for Newman’s climate record, “She’s a friend,” Casten said. “I’m delighted to have her vote. But … where are we pushing the envelope to actually make sure these things happen and happen in a way that grows the economy that creates jobs [and] isn’t just a sound bite?”

Newman’s focus on climate came shortly after the decision earlier this month by the League of Conservation Voters Action Fund, a major liberal environmental voice, to endorse Casten, a rare move in races between Democratic incumbents.

“I would never presume to know what’s in the heads of LCV,” Newman said. “I have been endorsed by many climate organizations over the years. So, you know, bravo. I’m happy that they’re happy with their candidate. I don’t necessarily agree. I believe I’m stronger on the climate.”

Progressive climate groups that backed Newman in the 2020 race, such as Friends of the Earth Action, 350 Action and the Sunrise Movement, have not yet weighed in on the 2022 primary.

Rep. Kathy Castor (D-Fla.), who chairs the Select Committee on the Climate Crisis, is also backing Casten in the race.

Newman followed LCV’s endorsement of Casten with social media posts like one arguing that the district “needs real climate action, not just platitudes,” with a graphic comparing their records. It pointed to fossil fuel industry campaign contributions Casten accepted and said that he “lobbied Congress as CEO of a fossil fuel company,” among other arguments.

Another tweet reacted to fossil fuel company profits, saying, “That is awful enough, but to make matters worse, folks that claim they are climate champions take corporate PAC money from them, [shaking my head].”

Casten took $4,000 from Chevron Corp.’s political action committee in the 2020 election cycle and $1,000 from BP PLC’s, according to Federal Election Commission records. Newman’s graphic also labels his contributions from Exelon Corp.’s PAC — $9,500 in the 2020 cycle and $3,000 so far in the 2022 cycle — as fossil fuels, since the utility provides natural gas service and has some power plants that use fossil fuels.

Newman has signed the No Fossil Fuel Money Pledge, promising not to accept large donations from fossil fuel PACs, executives or lobbyists, and doesn’t take corporate PAC contributions. NextEra Energy Inc.’s PAC tried to send her $5,000 in 2020, federal records show, but her campaign rejected it.

She said her climate record has been “action-driven.” She supports the Green New Deal and the THRIVE Agenda, a broad set of policies to implement the Green New Deal, expand justice-oriented policies and improve economic conditions, among other provisions.

Newman is a lead sponsor of the “America’s Clean Future Fund Act,” which would put a price on greenhouse gas emissions and use the money for various environmental programs. And as a member of the Transportation and Infrastructure Committee, she helped get electrification funds for the Chicago Transit Authority.

She also points to her activism from before she was in Congress. She was part of the community group that protested the Sterigenics facility in Willowbrook, which used ethylene oxide and was shut down in 2019.

‘What bills are you writing?’

Casten has had several legislative proposals signed into law. The defense bill signed in January included provisions to reduce the Defense Department’s greenhouse gas emissions, including to require 10 percent of military installations to reach net-zero emissions by 2035.

He was a lead sponsor of legislation to promote battery storage that passed as part of a 2020 appropriations bill. And he’s been a vocal advocate for the $555 billion in climate provisions in the “Build Back Better Act,” leading multiple efforts to revive it, including in a letter this week (E&E Daily, March 15).

“I think she’s voted the right way on bills. The question is, what bills are you writing?” Casten said. “If you look at Congress writ large, we do not have a good history as a body of actually writing the laws that need to be done to deal with the climate crisis.

“I’m sorry that at the end of this primary, Marie’s not going to be here,” he added.

The district in which Newman and Casten are running is more moderate than Newman’s current district — which itself has had elected Democrats since the 1970s. She’s also fighting accusations that she gave someone a job in order to stop him from running a primary campaign against her; the Office of Congressional Ethics said she may have broken the law, but Newman has denied wrongdoing.

Suzanne Chod, a political science professor at North Central College in Naperville, Ill., said Newman faces an uphill battle in the race, so it’s no surprise she’s attacking Casten from the left while trying to undercut a presumed strength of his.

“And because Rep. Casten pegs himself as an energy expert, and one who is committed to mitigating the effects of climate change, Rep. Newman’s attack on his ties to fossil fuels and lack of support for the Green New Deal give her some leverage with progressive voters and those who prioritize climate policy,” she said.