Who’s who in Trump’s infrastructure initiative 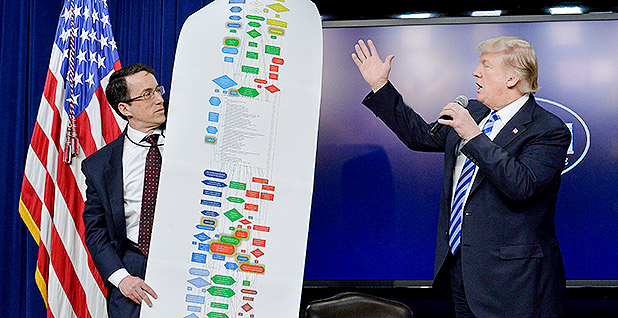 The special assistant to the president for infrastructure policy, D.J. Gribbin, holds a chart for President Trump during an April 2017 CEO town hall at the White House. Olivier Douliery/picture-alliance/dpa/AP Images

The president’s pitch for a bipartisan infrastructure deal during his State of the Union speech last night capped weeks of closed-door meetings and public conferences among industry and environmental groups, mayors and lawmakers, Trump’s infrastructure guru David James "D.J." Gribbin and the White House Council on Environmental Quality.

While firm details about Trump’s plan are scarce, White House officials have been busy behind the scenes vetting ideas that might spur high-level discussions at the Republican policy retreat in West Virginia this week (E&E Daily, Jan. 31). Expected at the retreat are National Economic Council Director Gary Cohn and Transportation Secretary Elaine Chao, who have been meeting with members for months now to pitch and hear ideas.

Gribbin, a former banker working under Cohn on the NEC, has emerged as a key negotiator on infrastructure. He’s reportedly shared a beer with the top Democrat on the House Transportation and Infrastructure Committee, Rep. Peter DeFazio of Oregon, to discuss roads and bridges, according to the Washington Examiner. He’s also huddled with anxious mayors this month to discuss a timeline.

Sources say Gribbin is working closely with CEQ — notably with Alex Herrgott, a former staffer for Sen. Jim Inhofe (R-Okla.) who has worked closely with Democrats in the past and had a hand in several pieces of infrastructure legislation.

Both Gribbin and Herrgott, who are working in newly created roles specifically focused on pushing Trump’s infrastructure package, are likely to pitch the final product to Congress when negotiations wrap up.

While not involved in infrastructure discussions, sources are also watching veteran House energy lawyer Mary Neumayr, who began working as CEQ’s chief of staff last March and has stayed on in an acting capacity as Trump’s choice to lead CEQ, former Texas regulator Kathleen Hartnett White, remains tied up in the Senate.

"It is entirely flipping the role of the CEQ on its head to have them lead the permitting direction, so that’s not the role of CEQ," she said. "CEQ has been about the environment. I see this as a big departure."

Here are key players on infrastructure:

The 55-year-old former senior Macquarie Group banker has deep expertise in fostering public-private partnerships and is no stranger to the federal government.

For more than six years, he led the government advisory for Macquarie Capital, leading teams structuring public-private partnership transactions for governmental clients. According to his online bio, he left the investment bank three years ago to work as a national director of consulting for Omaha, Neb.-based HDR, a consulting and engineering firm that fosters public-private partnerships on infrastructure projects.

Prior to that, he worked six years for Koch Industries, a corporation owned by billionaire brothers Charles and David Koch, as its director of public-sector business development, and as a legislative assistant for former Texas Rep. Larry Combest (R). He has a bachelor’s degree in philosophy and a law degree from Georgetown University.

At his confirmation hearing in 2007, Gribbin shared that he was born in Frankfurt, Germany, has seven children and served as a national field director for the Christian Coalition in the 1990s.

Herrgott is leading an office focused on speeding regulatory reviews at CEQ.

Described by a Senate Democratic aide as a "good-faith negotiator," Herrgott in recent months has huddled with conservative and transportation groups, pitching the idea of winnowing environmental reviews down to two years or less. One lobbyist said Herrgott appears to have the "drafting pen on a lot of the sort of administrative guidance."

Among many former Inhofe staffers in the administration, Herrgott served as legislative director for the Senate Environment and Public Works Committee from 2013 to 2014 and had a hand in drafting several pieces of infrastructure legislation, including the Water Resources Development Act and the highway bill (E&E Daily, May 1).

Herrgott was a staff member on the EPW panel from 2004 to 2011 and then joined the U.S. Chamber of Commerce as a director of transportation and infrastructure, according to his online bio. Before that, he was an EPW staffer from 2004 to 2011.

"We have no intention of eroding environmental protections," he reportedly said when addressing the Transportation Research Board’s annual conference this month, according to The Washington Post.

CEQ chief of staff Neumayr is also being eyed as a pivotal player in Trump’s bid to speed NEPA reviews.

"If they’re going to spend money on infrastructure, the only way they’re going to be able to do it is if they streamline the NEPA permitting process," said Myron Ebell, director of the Center for Energy and Environment at the Competitive Enterprise Institute, who led the Trump transition at U.S. EPA. "Since CEQ is in charge of NEPA, that means Mary and her team will be important."

Before that, Neumayr served in the George W. Bush administration as deputy general counsel for environment and nuclear programs at the Energy Department from 2006 to 2009, and as counsel to the assistant attorney general for the Justice Department’s Environment and Natural Resources Division from 2003 to 2006.

Beyond the White House

While negotiations are in the early stages, a firm infrastructure plan — one that would make its way through Congress — would likely involve key agencies pitching in selling pieces of the package.

Some sources questioned whether Trump’s infrastructure push could lead to the filling of a vacant slot directing the Federal Permitting Improvement Steering Council, a panel created under the "Fixing America’s Surface Transportation Act" focused on improving coordination, transparency and accountability for large infrastructure projects across the federal footprint. Trump has yet to appoint a director of the steering council while Janet Pfleeger, a career staffer, is serving as deputy director.

"If [Trump] really wanted to be streamlining, I think he would have picked someone," said Cynthia Taub with the law firm Steptoe & Johnson.

But Pfleeger told a Senate committee in December the council was working with administration officials to create more predictable permitting for large and complex infrastructure projects and tackle interagency disputes. Pfleeger, who previously worked at Interior for a decade after beginning her career as an economist at the Department of Labor, also said the panel is getting the job done.

"The permitting council of the executive director is positioned to truly change the siloed nature of the permitting process," she said.