Why a ban on Russian energy is hard for Germany 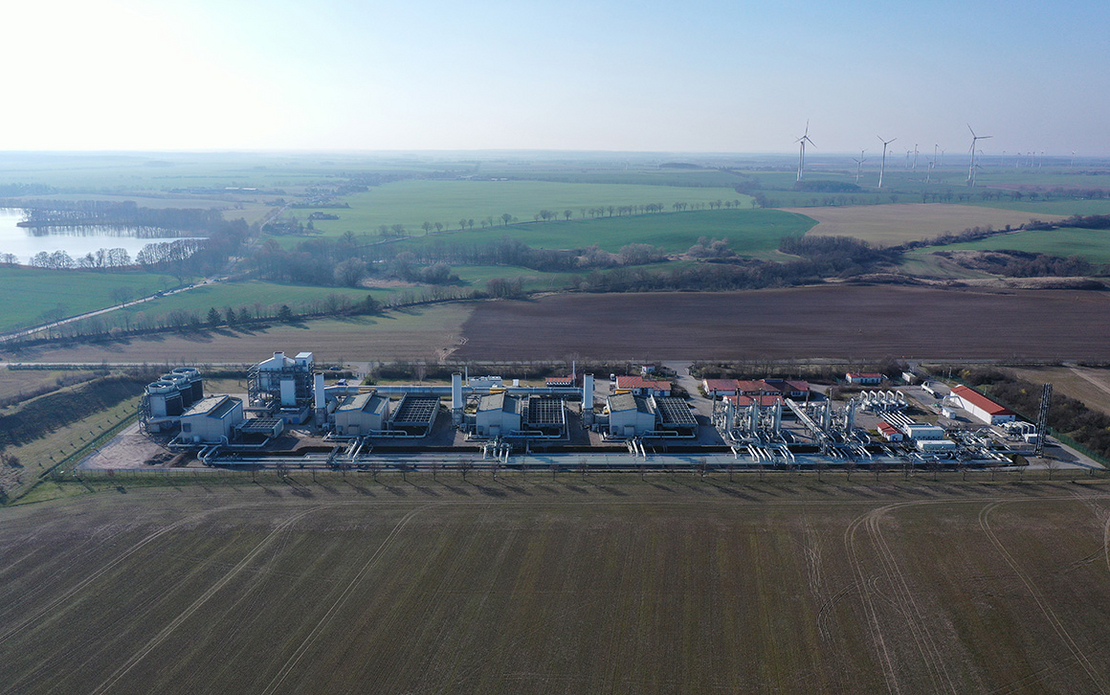 A compressor station of the Jagal gas pipeline is pictured last month near Mallnow, Germany. The Jagal is the German extension of the Yamal-Europe pipeline that transports Russian gas to Germany. Sean Gallup/Getty Images

Germany is under growing pressure to sever its ties to Russian gas and oil as more evidence of possible war crimes by Russian forces emerges from Ukraine.

But Europe’s largest economy has resisted a complete and immediate end to Russian energy largely for one reason: It undergirds much of Germany’s industrial sector.

Last year, Russia supplied more than half the gas that Germany uses to heat homes and power factories for goods such as steel, chemicals and even sweets. Russia also is the source of half the country’s coal and more than a third of its oil imports.

There will be consequences if Germany stops buying Russian energy, particularly natural gas, said Karen Pittel, director of the Munich-based ifo Center for Energy, Climate and Resources. A full embargo could spark a wave of unanticipated impacts that would ripple through the Germany economy.

“That’s the big fear: That this initial shock will be so large that there is no coming back from it,” she said.

Most economists’ predictions are not so dire. And politicians tend to moderate their tone when asked to determine whether the German economy could survive a situation in which Russia was the one to cut off imports, Pittel added.

Either way, the push to end trade has put a spotlight on how tied Germany is to Russian energy.

It’s a dependence that extends back decades, surviving the Cold War and past moments of geopolitical tension. When Russian gas kept flowing, it fostered the belief among German officials that Russia would remain a steady, reliable provider of energy, said Lutz Weischer, head of policy at Berlin-based Germanwatch.

“It’s fair to say that German politicians in the past have allowed Russian companies to play way too big a role in the Germany energy system,” Weischer said.

Russia’s invasion of Ukraine has changed all that.

Earlier this week, the German government took temporary control of a German subsidiary of Russia’s state-owned energy producer Gazprom after Gazprom tried to cut ties with the unit (Energywire, April 5). Moscow also is insisting that oil and gas sales be settled in the Russian ruble as a way to prop up the currency.

‘This has to end’

Germany isn’t alone in resisting calls for an energy embargo. Smaller countries such as Austria have, too. But Germany’s resistance has held back more action by the European Union, say observers.

On Tuesday, the European Commission put forward another package of sanctions that for the first time includes a ban on coal imports worth about €4 billion per year but does not extend to oil or natural gas.

In comparison, purchases of oil and gas by Europe generate around €100 billion annually for Moscow, and proponents of an embargo on those fuels argue that it would put a greater dent in Russia’s war chest.

“Our sanctions are hard because they limit the Kremlin’s political and economic options. They are smart because they affect Russia much harder than us. And, honorable members, these sanctions will not be our last sanctions,” European Commission President Ursula von der Leyen said yesterday in an address to members of the European Parliament.

The E.U. is working on additional sanctions that could include oil imports and would aim to limit the revenue Russia gets from fossil fuels.

“This has to end, and this is the next step we will have to take together,” von der Leyen added.

A ban on oil would deliver a much greater financial blow to Russia and wouldn’t be as difficult for Germany to weather as gas, since it could more easily buy oil on the global market, say economists.

But as long as Russia continues to export fossil fuels to Europe or elsewhere — and at elevated prices owing in part to its invasion — Moscow will continue to bring in revenue.

Reduce demand instead of ban

Despite the challenge of cutting its ties to Russian energy, Germany has moved to do so since Russia’s invasion of Ukraine six weeks ago. It quickly halted the approval process for the Nord Stream 2 pipeline — a joint venture between Moscow and Berlin — that would have boosted supplies of Russian gas into the country.

It has reduced its reliance on Russian gas from 55 percent of its supply before the invasion to around 40 percent now. Germany also has cut imports of oil and coal.

Still, much of Germany’s industrial sector depends on gas as both an energy source and as a feedstock for the production of fertilizers and other chemicals. And the threat of a potential shutdown to industry has made officials reluctant to completely turn off the taps over fears it could spark a recession. Several lawmakers have said an end to Russian oil and gas imports would hurt Germany more than Russia.

Businesses meanwhile have rushed to highlight their strategic economic importance in the hope they won’t be cut off if the government starts fuel rationing. Chemical company major BASF SE and Siemens Energy AG have warned of reductions in output and job losses.

Various studies show that a fossil fuel embargo could shave off anywhere between 0.5 percent to 6 percent from previous gross domestic product forecasts. A paper Pittel from the ifo Center for Energy, Climate and Resources co-authored last month found that a Russian energy embargo could cost the economy up to 3 percent of gross domestic product but it would be manageable.

She believes that if policymakers thought they could make the break without large repercussions, they would have severed the ties already.

“But nobody knows … and that makes the decision so difficult,” said Niklas Höhne, a climate policy expert at the New Climate Institute in Cologne.

Georg Zachmann, a senior fellow on energy and climate policy at Bruegel, said the likely outcome is somewhere in between. No one will have to turn off the heat and industry won’t be crippled, but people would be encouraged to use less power and industry would have to import energy-intensive products such as steel and glass.

It’s a risk many politicians in Germany are not yet willing to take. Instead, many have focused on reducing consumption.

Robert Habeck, Germany’s minister for economy and climate protection, has said the country is working to end Russian oil and coal imports by the end of this year, but it would take at least until 2024 to cut its reliance on Russian gas.

A faster future for renewables?

An immediate end to Russian energy supplies would be difficult. But energy experts say there are options available. The European Union already has outlined a plan to cut two-thirds of its gas imports by the end of the year with a goal of ending them as soon as possible (Climatewire, March 9).

An analysis by several German think tanks found that Germany could significantly reduce its need for Russian gas in the short term through energy-saving measures and the rapid build-out of renewables and low-emission alternatives. If a ban were implemented tomorrow, Germany would need to look for alternative suppliers of oil and coal on the world market.

It also will need to cut consumption by conserving energy and using it more efficiently. That could mean reducing demand in the power sector for coal and gas or putting speed limits on Germany highways, a move that has been met with great resistance but is long overdue, said Weischer from Germanwatch.

“We’re in the middle of an energy crisis, we have to reduce oil demand. I think asking for a speed limit on our highways should be a no-brainer,” he said.

There are also measures that could quickly accelerate the deployment of renewable energy, such as repowering old wind farms or new solar power installations.

The crisis could lead to a transition faster than the hugely ambitious one Chancellor Olaf Scholz laid out when his government took office in December. Under that plan, Germany set a goal of getting to 80 percent renewable energy by 2030 and a fully renewable power sector by 2035. Yesterday, Germany’s Cabinet voted in favor of legislation that supports those goals.

“In view of Russia’s war of aggression against Ukraine, which violates international law, it has now taken on a double priority,” Habeck said in a statement. “For one thing, the climate crisis is coming to a head. On the other hand, the invasion of Russia shows how important it is to phase out fossil fuels and to consistently push ahead with the expansion of renewables.”

But the move won’t fill a gap if imports end tomorrow. It also could lead to greater use of coal in the short term, with the retirement of at least one coal-fired power plant now delayed (Climatewire, March 11).

Zachmann, from Bruegel, worries that policymakers still are reluctant to discuss the hard choices that will be needed more immediately — such as how much industrial output gets sacrificed to prevent extending the life of Germany’s few remaining nuclear plants, or how much additional coal might be burned.

“What we should strive for is not zero volumes but full replaceability,” he said. “We should be able to live without Russian coal, oil and gas essentially from today.”

The mistake Germany made in the past was not doing more to ensure its energy autonomy, Zachmann added.

“Now we are in a Catch-22 situation,” he said. “We are buying less and less oil, coal and gas, but the prices of it is increasing much more than we are reducing our volumes, so therefore the money that we are sending to Russia is increasing.”

To prevent those financial flows, he and several other policy experts are proposing an import tariff on oil rather than a full embargo. If Europe put a tariff of 30 percent, for example, on the oil it receives from Russia, it could reduce the money flowing to Moscow while also lowering the cost of energy imports, Zachmann argues.

What most measures come down to, however, are the need for more austerity. Replacing Russia with other suppliers could lead to future problems since it would lock in dependence on other countries while failing to bring down high energy prices, said Germanwatch’s Weischer.