Why a President Biden could fail on clean energy 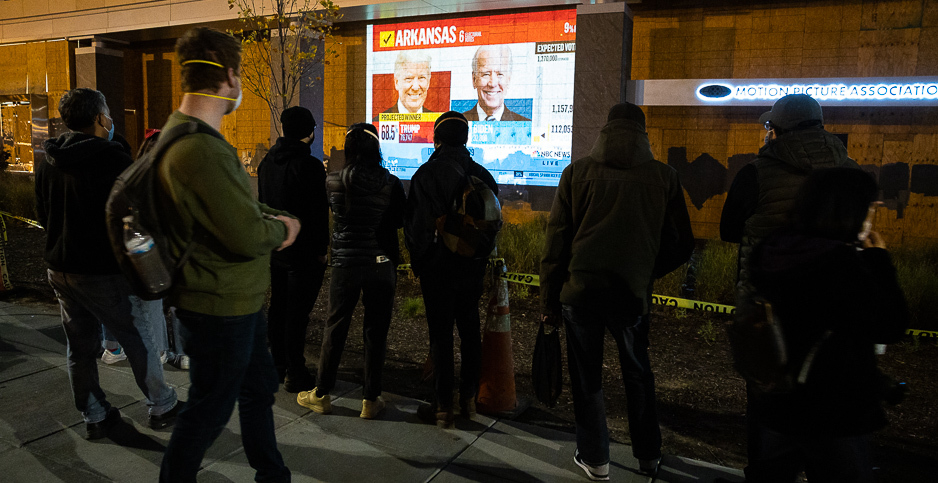 Protesters watch the U.S. presidential election results roll in Nov. 3 near the White House in Washington. Democratic nominee Joe Biden is favored to win, but thousands of votes in key states have not yet been tallied. Francis Chung/E&E News

Democrats seemingly failed to deliver a "green wave" in races across the country, leaving Joe Biden — who was edging out President Trump in vote tallies today — facing daunting odds if elected to achieve sweeping action on energy policy and climate change.

A Biden presidency without a Democratic majority in the Senate could largely be relegated to tinkering around the edges on energy policy, with his ambition to secure a transition to renewable energy a heavy lift.

"One thing is for certain: if Joe Biden shuffles into the White House, he will do so lacking any kind of mandate to make energy more expensive, restrict the use of our domestic natural resources, ban fracking on federal lands, or impose a carbon tax or other restrictive carbon policies on the American public," Tom Pyle, president of the American Energy Alliance, who led Trump’s Energy Department transition team, said in a statement.

Pyle said Democrats in energy-rich states who sought to distance themselves from Biden’s energy policies lost their seats, including Reps. Kendra Horn of Oklahoma and Xochitl Torres Small of New Mexico.

The American Exploration and Production Council, too, said the results were a green light for fossil fuels after Trump campaigned in the closing days on his unabashed support for hydraulic fracturing for oil and gas. He made the pitch repeatedly in Pennsylvania, one of several states where ballots were still being counted yesterday.

"As fracking became a national issue in this year’s presidential and state elections, it is clear — now more than ever — that Americans want a steady supply of affordable and reliable energy to be produced right here in America," said the council’s CEO Anne Bradbury.

Political analysts noted, however, that some Republican senators may be eager to show progress on an issue that their party has grappled with, as a number of senators from key states will be up for reelection in 2022.

And Biden — who as vice president was routinely dispatched by President Obama to the Senate to hammer out agreements — has more experience working across the aisle than any other politician, Scott Segal, a partner and energy industry analyst with Bracewell LLP’s Policy Resolution Group, said yesterday on a postelection conference call.

Without a majority, for Democrats the ability to "jawbone and create a middle path for legislation is more important," Segal said.

Republicans like Sen. Lisa Murkowski of Alaska, for example, have suggested a plan that favors innovation with a hefty dose of research and development funding (E&E Daily, Oct. 5).

In addition to legislation, a new administration could take several steps on its own, starting by rejoining the Paris accord on climate change.

Biden, if he prevails in the White House contest, would likely have more room to maneuver on the international front, and he’s promised that he would recommit the U.S. to the Paris climate accord on his first day in office.

Trump pledged to withdraw from the agreement, and Secretary of State Mike Pompeo yesterday filed the paperwork to make it official.

Biden should also reemphasize climate policy throughout the government by setting limits on methane and other greenhouse gas emissions and making climate change a priority in foreign affairs, Sivaram said.

Biden’s experience in government will give him an advantage in carrying out a plan. Trump’s administration was frequently criticized for being poorly staffed and unable to follow through on its proposals and craft them to withstand legal challenges.

"On the front end, he’s got to be leading on policy changes," Sivaram said. "On the back end, once statutory authorization comes in … a Biden presidency is best equipped to implement the policies effectively."

As of press time, the White House race remained too close to call — with the outcome of the Electoral College dependent on final counts from several battleground states: Pennsylvania, Arizona, Nevada, Georgia and North Carolina.

Trump’s campaign filed lawsuits yesterday in Pennsylvania, Michigan and Georgia, joining other Republican legal challenges in Pennsylvania and Nevada. The filings demand better access for campaign observers to locations where ballots are being counted and raise absentee ballot concerns. The Trump campaign also is seeking to intervene in a Pennsylvania case at the Supreme Court that deals with whether ballots received up to three days after the election can be counted, according to deputy campaign manager Justin Clark.

Sasha Mackler, energy project director at the Bipartisan Policy Center, said the results so far suggest that climate change was not the driving force that many had hoped it would be. But he, too, suggested there could be progress by including efforts to address climate in various parts of legislation, rather than a massive bill.

"Energy innovation is an area that could be possible, especially if it’s tied to infrastructure or economic recovery efforts," Mackler said.

He said several programs including various ways to capture carbon emissions and speed up a transition to clean electricity also have potential, noting that utilities are already moving that way.

"The results show that climate is important, but there’s an uneasiness when it comes to the energy transition and the average voter’s economic welfare," Mackler said. "Climate policy has to be approached through that framework because it’s not going to be as productive to approach it as a stand-alone."

Yet, Republicans are likely to block "all but the most anodyne parts of the other side’s agenda," said Mike McKenna, a former Trump energy adviser who briefly led the president’s transition team at the Department of Energy. He called ambitious climate change plans like the Green New Deal — which Biden did not endorse — "pretty much roadkill."

And McKenna noted that with Democrats facing a more narrow majority in the House after losing seats, "it is likely that legislation emerging from there will be weak tea compared to what it would have been."

House Speaker Nancy Pelosi (D-Calif.), who had hoped to expand the party’s majority, in a letter to House Democrats yesterday, called it a "challenging election" and promised that the chamber would deliver, among other things, "bigger paychecks by building green infrastructure."

Still, observers expect Biden would seek to overturn many of Trump’s environmental rollbacks through regulatory and executive action. He would also appoint his own Cabinet secretaries who would pursue greener agendas.

For example, critics say the Trump administration has missed 25 deadlines to update energy efficiency standards for appliances and that another 25 will come due over the next four years.

"There’s bipartisan grassroots support for a clean environment across America," said Wendy Wendlandt, acting president at Environment America. "The devil is in the details. While most Americans agree that we need to solve climate change, they are more likely to go for simple, sensible solutions — wind and solar tax credits, more energy-efficient appliances or natural pollution reduction by keeping forests strong and healthy — rather than a Green New Deal."

Paul Bledsoe, a former Clinton White House climate aide and strategic adviser at the Progressive Policy Institute, said he expects Biden to try to build support for climate-related issues that could have economic benefits, such as a clean energy infrastructure bill.

"He’s respected by a lot of Republicans in the Senate, and given the economic crisis they could find some real middle ground around infrastructure," Bledsoe said.

Bledsoe and other observers said the loss of Democrats in the House and potential continuing Republican control of the Senate make it less likely that Biden will move off a centrist tack.

"I think there is an opportunity where many Republicans embrace an economically driven clean energy transition that focuses on capturing new markets," Bledsoe said. "And I think Biden will focus much more on that than a far-left legislative agenda. It’s just not feasible."

The U.S. Chamber of Commerce, which last year declared "inaction is not an option" on climate change, suggested that a "sweet spot" in a divided government could be an infrastructure compromise "that reflects resiliency, connectivity and advancing solutions on climate change." Regardless of what type of policy is pursued, the chamber is confident that some climate legislation will be a "high-level priority."

"It could be that it doesn’t take the form of one comprehensive omnibus package, but becomes an element and is embedded in infrastructure and a stimulus proposal in terms of energy investments," said Neil Bradley, executive vice president and chief policy officer at the Chamber.

Joseph Majkut, director of climate policy at the libertarian-leaning Niskanen Center, added that there’s a recognition that Congress needs to act on climate change, since it was a high-profile issue in the elections.

"A lot of climate hawks are looking at this potential split government as a challenge," he said. "It really is a constraint to what they want to do, but sometimes constraints allow for creativity."

Miranda Willson and the Associated Press contributed to this report.