Why agencies buy less clean power under Biden than Trump 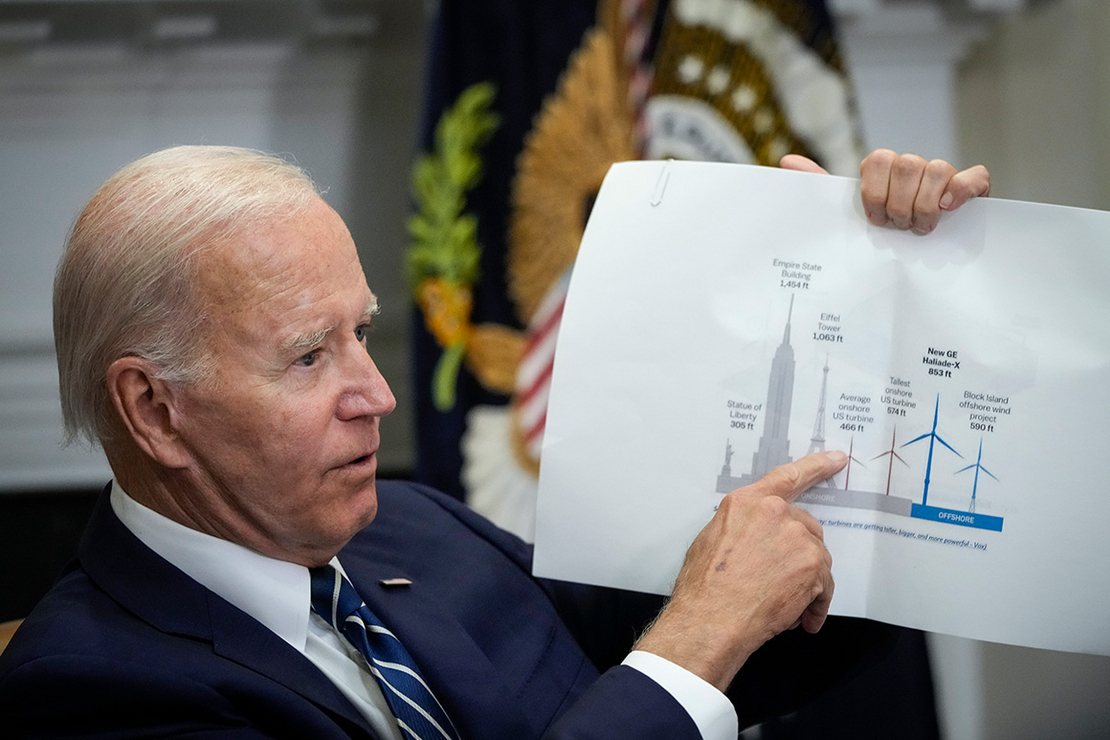 President Joe Biden points to a wind turbine diagram during a meeting in the White House in June. Drew Angerer/Getty Images

President Joe Biden is implementing some of the strongest renewable energy incentives in history, but federal procurement of clean power at many agencies has fallen since he took office.

Sustainability scorecards released last week by the White House show that renewable energy purchases at EPA and the departments of Energy, Agriculture, and Housing and Urban Development for 2021 were at or near their lowest levels since 2010. That contrasts sharply with the amount of clean energy that those agencies bought for their operations under former Presidents Barack Obama and Donald Trump, particularly at EPA, the agency tasked with administering some of Biden’s flagship climate policies.

The progress reports for each agency tell slightly different stories about the purchase of wind and solar power within the federal government. But the trend across several agencies shows that renewable energy use peaked in the Obama or early Trump years, then cratered before the Covid-19 pandemic. It has not rebounded under Biden — in contrast to his administration’s promises that federal procurement would be part of the “whole of government approach” to curbing climate change.

Take EPA. The agency tasked with regulating everything from power plants to oil wells for their effects on global warming saw its purchase of renewable energy dwindle last year to its second-lowest level since 2010. EPA used 11,000 megawatt-hours of renewable electricity last year, or 11.9 percent of its overall power consumption. By contrast, between 2010 and 2016, the agency consumed an average of 138,000 MWh of renewable power annually.

During those years, EPA invested heavily in renewable energy certificates, or RECs, to cover more than 100 percent of its annual electricity use.

Renewable energy companies generate one REC per megawatt-hour of electricity that they contribute to the grid, and entities — including federal agencies — can purchase them to offset their consumption of fossil fuel-based power while encouraging investment in renewables.

EPA is still buying RECs — including enough to account for 7,000 MWh last year. But its procurement of renewable energy has fallen far short of an Obama-era executive order that directed agencies to draw 10 percent of their power from green sources in 2016 and 2017, and 20 percent by 2020.

Other agencies followed a similar trend.

At HUD, 2016 might have been dubbed the Year of the Green Electron. One year earlier, the department drew only 8.9 percent of its power — or 2,000 MWh — from renewable sources. Then it ballooned to 84.6 percent in 2016, before crashing back to earth the following year at 11.1 percent. Last year’s rate was marginally higher at 25 percent.

A similar story was unfolding at USDA. Renewable power usage peaked at 35 percent of consumption in 2016. It fell thereafter. Usage last year stood at 13.4 percent.

The Department of Defense is an outlier. Last year, it used more than 1.9 million MWh of clean power. That was only 6.5 percent of the department’s total consumption but still represented its high-water mark for green electricity use.

So what happened to clean power under Biden?

Agency officials didn’t respond to requests for comment for this story. But Andrew Mayock, Biden’s federal chief sustainability officer, said the low 2021 numbers for renewable energy likely have the same cause as some of the higher numbers agencies recorded in the early Trump years.

“I think what you’re seeing is the lag in the system to both ramp up and ramp down,” he said.

Other aspects of Biden’s green procurement agenda transitioned more quickly, Mayock said. For example, the federal government went from having only 2 percent zero-emissions vehicles in 2021 to 12 percent this year.

The Obama-era executive order on renewable energy stayed on the books until 2018, when Trump rescinded it. Some of the higher rates of green power procurement in 2017 and 2018 might be attributable to Obama policies. In 2016, the cost of RECs fell sharply to about 30 cents each, which probably played a role in large procurements like the one at HUD, experts say.

White House policy directives and agency priorities both had influence.

“Clearly a lot of these depend on agency leadership and just who is making the decisions,” said Michelle Solomon, a policy analyst with Energy Innovation.

Solomon noted that the Biden administration in its first year also faced staffing and budgetary hurdles left over from the previous administration that might have left it without the personnel needed to rebuild renewable electricity procurement programs at various agencies.

Biden did introduce a new executive order of his own in December that went well beyond the Obama-era targets.

The order directs the federal government as a whole to decarbonize its electricity use on a net basis by 2030, “including 50 percent 24/7 carbon pollution-free electricity.”

“Over the course of 2022 here, we’ve been putting in the implementing infrastructure to actually go deliver on that goal,” said Mayock. “And so within the umbrella of our mandate of carbon-free electricity, what you’ll see is that numbers start to tick up and to tick up dramatically over the next year to two as we put these instruments in place to go deliver.”

The 100 percent net-zero commitment by 2030 would be satisfied mostly with renewables and nuclear energy. Mayock said it was designed to facilitate Biden’s larger goal of decarbonizing the U.S. power grid by 2035.

In August, the White House Council on Environmental Quality published implementing instructions for the December executive order, which called for “significant cross-agency collaboration, changes to how agencies plan and execute energy procurement, and enhancements to agency capabilities to measure and track [carbon-free electricity] consumption, as well as 24/7 CFE, while technologies, market rules, and procurement mechanisms for CFE continue to develop.”

The Biden administration’s commitment to “24/7” is a nod to how much the renewable energy sector has matured since the Obama administration. Then the goal was simply to build more. Now it is to overcome hurdles so it can supply baseload power.

Dan Esposito, a senior policy analyst at Energy Innovation, said the Biden administration is trying to use the federal government’s purchasing power to ensure that renewable electricity reaches the grid at all hours of the day, and not only when the sun is shining or the wind blowing.

“What that means in practice is you’re building more battery storage to match when the solar is produced, instead of like sending it all to the grid right away,” he said.

The RECs that the Obama and Trump administrations bought to meet their procurement targets weren’t necessarily linked to actual power that was keeping the lights on and the copy machine running at headquarters. That might still have been derived from fossil fuels. Renewable energy certificates, which were bought on an annual basis from developers across the country, may or may not have translated to any additional renewable energy use.

Esposito said a federal plan that’s built on RECs for procurement would not help the grid run on renewable energy around the clock or throughout the year, as it would have to do to meet the Biden administration’s loftiest decarbonization targets.

“What Biden’s trying to do is by setting this 24/7 standard is making it so you can’t just buy RECs to match your annual demand,” Esposito said.

“Now you need to start building new projects nearby that are sending electricity to you when you’re actually using it,” he added. “So it’s a much tougher standard to meet, and I expect even though we don’t have the 2022 data, I expect it’ll take a few years for us to start building those projects to show that increase.”