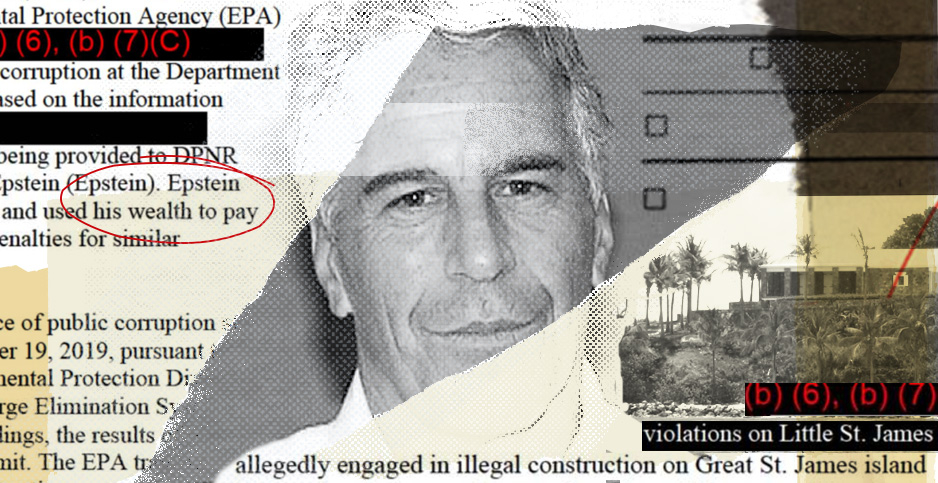 Jeffrey Epstein came under scrutiny by EPA’s internal watchdog over alleged government corruption in the U.S. Virgin Islands 11 days after his death.

The reason? Information given by a source, whose name was redacted, about "possible kickbacks and other considerations being provided" to environmental regulators in the Caribbean "related to properties owned by the now deceased Jeffrey Epstein," according to a case closing report from EPA’s Office of Inspector General obtained by E&E News under the Freedom of Information Act.

Long suspected of exploiting underage girls, Epstein was charged by federal prosecutors with an elaborate sex trafficking scheme last year. The financier and convicted sex offender who accumulated millions of dollars and hobnobbed with presidents and royalty avoided accountability for violating environmental laws for years as well.

Epstein bought Little St. James in 1998 and then Great St. James in 2016. He flew to his expansive properties there on his private jet, dubbed the "Lolita Express" for the female minors who were among its passengers.

The Washington Field Office in the IG’s investigations branch launched the probe into Epstein’s dealings with government officials regarding those properties.

The agency suspected of being compromised by Epstein was the Department of Planning and Natural Resources, the U.S. Virgin Islands agency meant to protect and preserve the territory’s environment. The investigation by EPA’s IG, however, "did not reveal evidence of public corruption at DPNR."

"No further investigative action is warranted. This investigation is hereby closed," said the report, marked "FOR OFFICIAL USE ONLY," barring its release to "unauthorized persons."

Asked about the report, EPA IG office spokeswoman Tia Elbaum told E&E News, "The OIG does not have any comment."

"DPNR is not surprised that there were no findings of wrongdoing by the EPA OIG investigation," DPNR spokesman Jamal Nielsen told E&E News.

Yet EPA itself did come across potential wrongdoing by Epstein — not in corrupting government but in degrading the environment.

Regarding the alleged "illegal construction," EPA’s Caribbean Environmental Protection Division, located in Puerto Rico and overseen by the agency’s Region 2 branch, conducted a joint stormwater inspection with DPNR on Great St. James on Oct. 19 last year, according to the IG’s report.

Prosecutors in the Caribbean have shed more light on Epstein’s alleged environmental crimes.

DPNR repeatedly issued citations and fines against Epstein for violating the U.S. territory’s construction code and environmental laws. Those actions, however, didn’t deter him and an enterprise of affiliated companies.

"Because of Epstein’s enormous wealth, these fines had little effect in curbing or stopping the Epstein Enterprise’s unlawful conduct or conforming its activities to the law," said the complaint.

"The Epstein Enterprise’s violation of the construction and environmental laws was part of a pattern of behavior in flouting the laws of the Virgin Islands and holding itself above the law," the complaint also said. "Rather than participating lawfully in this community, the Epstein Enterprise took advantage of the secluded nature of the islands in furtherance of its crimes."

The lawsuit argues Epstein sought to prevent DPNR from conducting "routine site visits" to inspect unpermitted but possibly damaging construction on Great St. James. In addition, the "Epstein Enterprise" continues to stop or restrict the agency from doing random inspections on Little St. James and Great St. James while the U.S. Virgin Islands will be saddled with "significant expenses" to remove or remediate "the illegal construction," according to the complaint.

Nielsen with DPNR noted that allegations of environmental damages were included in the attorney general’s claims. He said, moving forward, all inquiries should be made to the AG’s office.

"DPNR has no further comments as it relates to Epstein and the case moving against him," Nielsen said.

Asked about EPA’s inspection on Great St. James that found unpermitted construction and Epstein’s other alleged environmental crimes, a U.S. Virgin Islands Department of Justice spokeswoman said the attorney general declined to comment for this story.

Erika Kellerhals, a lawyer for Epstein who received his will, didn’t respond to questions for this story.

Since then, George has pushed ahead with her case against Epstein’s estate. In May, her office announced that she had reached agreement with Epstein’s lawyers and his victims’ attorneys for a victims compensation fund.

Epstein was found dead in his Manhattan jail cell on Aug. 10 last year. His death was deemed a suicide.

More revelations may be forthcoming about Epstein’s lurid exploits.

Ghislaine Maxwell, Epstein’s close associate who has been accused of grooming underage girls for him, was arrested last week and remains in custody. The Associated Press reported she is being closely watched and has been given paper clothes to wear so as not to harm herself.