Why are greens opposing a carbon tax? 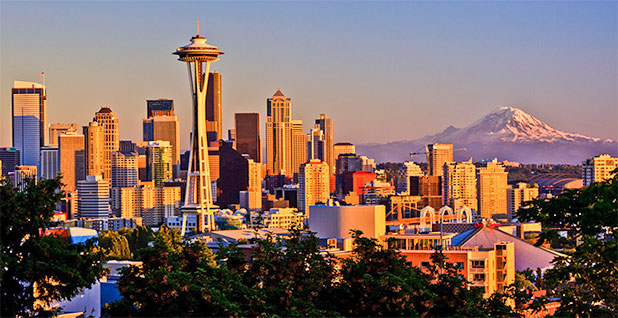 Washington state voters are poised to enact the country's first carbon tax, unless a group of environmentalists manages to kill it. Photo courtesy of the Department of Energy.

A ballot measure in Washington state seeking to impose the first carbon tax in the United States faces an uncertain future due to an unlikely source of opposition: environmentalists.

The rancor among Evergreen State greens threatens to sink a long-standing priority of U.S. climate activists. A recent poll showed those in favor of a tax with a 5-point lead, 42 percent to 37 percent, but fully 21 percent of Washington voters remain undecided.

Much of the conflict is personal. An attempt last year to reconcile the plan proposed by CarbonWA, the group behind the initiative, with one favored by the state’s leading environmental groups ended in acrimony.

Still, the tumult hints at an emerging divide, one that extends beyond the personal proclivities of Washington greens. At a time when political consensus over the existence of climate change is slowly mounting, the question of how to best tackle a warming planet is becoming increasingly divisive.

"I would say this is a preview of coming attractions in which a carbon pricing debate might look less like a traditional environmental debate over regulation and more like a battle over taxes and budgeting," said Barry Rabe, a professor of political science at the University of Michigan who is writing a book about the politics of a carbon price.

In California, Gov. Jerry Brown (D) has squared off with the Legislature over how to spend money generated by the auctions held under the Golden State’s cap-and-trade scheme. Canadian Prime Minister Justin Trudeau’s proposal to institute a national carbon tax is already facing questions over how its revenues would be spent (ClimateWire, Oct. 4).

"I think it is safe to say most environmental groups have converged around this idea of a carbon price, but there may be disagreement over what that means," Rabe said.

So it goes in Washington, where part of the environmental civil war is being fought over carbon revenues.

Split over appealing to the GOP or the liberal base

Initiative 732, as it is known officially, is revenue-neutral, much like the carbon-cutting regime it is modeled after in neighboring British Columbia.

The price on carbon would slowly increase under the plan, starting at $15 a ton in 2017, growing to $25 a ton in 2018 and then rising by 3.5 percent in inflation-adjusted terms each year thereafter. Part of the revenue would be used to refund the state’s earned income tax credit, providing up to $1,500 annually to low-income families.

But most of the new revenues would be offset by tax cuts. Washington’s sales tax would be cut 1.5 percent over two years. The business and occupations tax for manufacturers, assessed on firms’ gross receipts, would be eliminated entirely.

Advocates say the plan would be a boon for both the climate and business. British Columbia has seen emissions decline by 5 to 15 percent since it imposed a carbon tax in 2008. The province’s economy has outpaced much of Canada over that time.

Many of Washington’s largest environmental groups, including Climate Solutions, the Washington Environmental Council and the Sierra Club, aren’t sold on it. They frame the measure as a missed opportunity to invest in clean energy, minority communities affected by climate change and a transition fund to aid workers in the fossil fuel industry.

Regional cap-and-trade schemes, like those employed in the Northeast and in California, have shown it is possible to generate a "double-dividend," pricing carbon through auctions and using the proceeds to invest in renewables and energy efficiency, they say.

"Really, our argument is that we need to be having a conversation about what a good carbon pricing policy looks like," said Becky Kelley, president of the Washington Environmental Council.

Such policy disagreements only reflect a portion of the conflict, however. At its heart, the debate over Initiative 732 mirrors two differing political calculations about how to advance climate policy. Advocates believe a revenue-neutral model is critical for generating support for carbon-cutting policies among Republicans.

The GOP simply won’t support climate policies chock-full of new spending on other Democratic priorities like education or housing, Bauman said. Better, he reasons, to offer a proposal that appeals to Republicans’ free-market sensibilities but also attracts Democrats for its carbon-cutting potential.

"We’re working to do this in a bipartisan fashion that can be a model for the nation," Bauman said. Of the measure’s opponents in the environmental community, he added, "Climate change has become an issue the left uses to turn out their base, as opposed to an issue that everyone should be working on to try and save the world."

His opponents scoff at such claims. "I would give my right arm if that was the country and state we live in," said Climate Solutions Executive Director Gregg Small. "But the fact is large parts of the Republican Party don’t believe in it at all."

Many of Washington’s largest environmental groups have spent recent years building a coalition on the left, which features labor, minority and business groups. Climate change, they say, is transformative not just for the planet, but for large swaths of society. Poor communities are susceptible to sea-level rise, while workers could lose their jobs in the transition to a low-carbon economy.

Sierra Club ultimately decided not to support the measure because its authors failed to include those groups in the policy’s crafting.

"We’re committed to striving toward these principles of equity and justice in how we shape these climate policies," said Cesia Kearns, deputy regional director for the Sierra Club’s Beyond Coal campaign.

Inslee is a ‘no’ on carbon tax

Taxing carbon has long been a popular idea among climate activists and economists for its simplicity and effectiveness. A recent study by the University of British Columbia found that per-capita fuel consumption in the province would be 7 percent higher without the tax.

The Washington measure is important because it offers an opportunity to show the effectiveness of taxing carbon, said Christopher Knittel, an energy economist at the Massachusetts Institute of Technology.

Many carbon-pricing schemes, like those employed in Europe, have failed to price carbon at a rate that reflects the greenhouse gas’s true environmental cost, he said. Even in British Columbia, where the carbon price of 30 Canadian dollars ($23) has proved popular, there is debate today over whether it should be expanded.

What is impressive about the Washington proposal is how aggressive it is, Knittel said. Drivers would pay 15 cents more for a gallon of gas in its first year and 25 cents in its second. The cost would then continue to rise with the tax’s annual increase in the years following.

"I think those that follow carbon pricing closely are excited that a bill has made it this far," Knittel said.

The Evergreen State generally is fertile ground for climate policy. The state’s lone coal plant is slated to close by 2025. Lawmakers this year passed a measure designed to reduce the state’s reliance on coal burned beyond its borders. And the Washington State Department of Ecology imposed a carbon cap in September at the direction of Gov. Jay Inslee, a Democrat who has built a reputation as a climate hawk (ClimateWire, Sept. 16).

But Inslee, who is seeking re-election this year, is opposed to the tax. A spokeswoman for the governor said he couldn’t support the proposal because of its impact on the state budget. Revenues could fall by $797 million over six years, according to state budget projections.

The formal opposition campaign is being coordinated by the Association of Washington Business, an industry group. The state’s aluminum manufacturers and pulp industry are particularly opposed, saying the tax would create an uneven playing field for carbon-intensive businesses.

Yet the "no" campaign has struggled to raise money. Supporters of Initiative 732 have collected $1.3 million, compared to the $321,824 collected by opponents, according to state figures. Large local firms like Boeing Co. and Microsoft Corp. have stayed on the sidelines. And "yes" campaigners can point to support from across the political spectrum. Three Republican state senators; U.S. Rep. Jim McDermott, a Seattle Democrat who is retiring after 28 years in Congress; and former Starbucks Corp. President Howard Behar all support the plan.

The big question mark is whether advocates can count other environmentalists in their rank. Small, the Climate Solutions executive director, is a case in point. He has spent 25 years advocating for environmental causes and favors putting a price on carbon. But he remains undecided over how to vote on the climate tax initiative. "This experience has been by far the most painful and difficult set of circumstances I’ve ever dealt with," he said.

The future of America’s first carbon tax may well depend on what environmentalists like Small decide.

Correction: An earlier version of this story incorrectly named the Association of Washington Business.