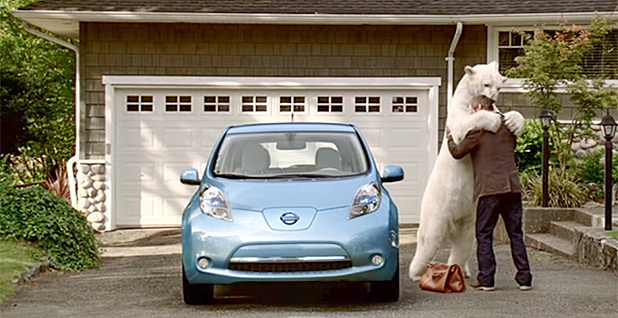 Nissan's Leaf advertisement caused a stir when it aired during an NFL game in 2010. Now, high-profile ads for all-electric and hybrid cars are a rarity. Photo courtesy of Nissan Malaysia via YouTube.

When Nissan rolled out its all-electric Leaf in 2010, the company’s bold advertising grabbed attention — and criticism.

The spot, which premiered during an NFL game, showed a polar bear trekking south past pollution-spewing power plants and cars, until he meets a Leaf driver and hugs him. Advertising critics slammed the ad they called smug, with one calling it "as subtle as a box of hammers to the face."

Although the auto industry has produced more all-electric and hybrid cars — more than 20 plug-in models are now available — automakers have rarely used high-profile ad buys to promote those cars.

"Wouldn’t it be terrific if those TV ads were more the rule and not the exception?" the Sierra Club’s Gina Coplon-Newfield asked.

Consider that Chevrolet spent just $7 million advertising its plug-in hybrid Volt in 2015, according to an analysis by Kantar Media for E&E News, while spending more than 10 times that on ads for the Malibu sedan and 23 times that to promote its beefy Silverado pickup.

A Media Monitors analysis commissioned by the Northeast States for Coordinated Air Use Management shows Ford Motor Co. advertised the gasoline-powered version of its Focus in 4,650 instances to national cable and broadcast audiences, compared with 200 for the electric version.

Nissan, whose Leaf is among the most popular electric cars on the market, advertised the vehicle in 1,750 instances on television nationwide, about half as often as it advertised the gas-powered Sentra.

"Every automaker is looking at what others are doing," he said. "And now the theme is to advertise the cars that sell."

That’s despite federal and state regulations that will require automakers to sell more efficient and electric cars through 2025.

"Consumer adoption of alternative powertrain vehicles has simply not lived up to expectations despite a 174 percent increase in such models being available to consumers since 2010," Alliance of Automobile Manufacturers President Mitch Bainwol told the House Energy and Commerce Committee last fall.

But environmentalists like Coplon-Newfield argue the lack of consumer interest in electrified cars is directly related to a lack of advertising.

"It’s a self-fulfilling prophecy," she said. "If you only concentrate your advertising efforts and dealer inventory on gas guzzlers and non-electric vehicles, of course that is what consumers will buy."

The company does advertise the Volt, just with less-expensive, targeted digital ads, while saving national airtime for its more popular vehicles.

Chevrolet is planning more national television ads for its all-new, all-electric Bolt, released this winter. Majore said he wants to bring the car "into a broader space."

That’s in part because the Bolt won the Motor Trend Car of the Year award last year, beating out gasoline and electric cars alike.

The award signified the car’s mainstream appeal, Majore said, adding that the decision to advertise the Bolt more widely is based on sales potential, not concerns about complying with regulations.

Majore said the company "could really get tangled up in our underwear" if it included fuel economy and emission standards in marketing calculations.

"Do we pay attention to these standards? Sure," he said. "But I’m not going to only advertise one version of a car when I could be turning away customers looking for just a front-wheel-drive vehicle. I think if we worried about these standards and used them as a highly influential variable when it comes to which products we advertise, we would be doing a disservice for what the market looks for."

This year, the company’s biggest ad push is for its crossover, the Nissan Rogue.

The launch of the all-new 2017 Rogue dovetailed with the latest Star Wars movie, "Rogue One," and national television ads for the vehicle show off its "safety shield" automatic braking technology to avoid running over K-2SO, the movie franchise’s latest droid sidekick.

Deciding to push the Rogue is simple, he said, because it’s a relaunch of a popular car.

"Obviously, we are going to put our advertising behind the thing that drives the large, vast numbers of customers into showrooms," Bedore said.

Without revealing financial figures, Bedore said Nissan is spending more on the Rogue than on the Leaf and also than on many other gas guzzlers.

Advertising the Leaf in 2010 was a way not only to promote the new car but also to make consumers feel good about Nissan generally.

Producing an electric car, he said, "is a halo for the brand."

Bedore argued the benefits go both ways, with revenue from Nissan’s more popular cars helping to pay for production of the Leaf.

"If we weren’t in the business of selling vehicles, we wouldn’t be able to provide the No. 1 electric car in the world because we couldn’t invest the profits from those other vehicles into that car," he said.

Toyota is one of the few companies to spend big on promoting electrified vehicles in recent years.

The company spent $115.6 million advertising the hybrid Prius in the first six months of 2016, according to Kantar Media, and $728,000 advertising its Tundra.

The Prius advertising in 2016 was a significant uptick from what the automaker spent in 2015 and included $15 million for a 90-second spot in the 2016 Super Bowl showcasing the hybrid outrunning the police in a high-speed chase.

Still, a Prius spokesman, who asked that his name not be used because he’s not authorized to speak about advertising strategy, said the company decided to highlight the hybrid at the Super Bowl not because of the car’s green credentials but because the big game coincided with the release of its redesigned Prius.

"We try whenever possible to choose cars for the Super Bowl where the timing is right, and with Prius the timing worked out," he said. "It’s more about pushing and maintaining sales of new cars, not about federal regulations."

Silverado advertisements, he said, help Chevy perpetuate its slogan of "find new roads" because the truck can drive in almost any terrain.

Harley said he was concerned about the impact these advertising practices might have on the industry’s ability to meet future CAFE standards: "If I were an automaker who had to hit targets by 2025, I would start steering my customers toward it."

The current trend, he said, is akin to automakers being the captains of cruise ships.

"You set sail in New York and you know you have to get to London, but in the meantime, you are heading down to the Caribbean because that’s where everyone wants to go," Harley said. "The easy sale is in the Caribbean."