Why Biden might be spending too much on climate 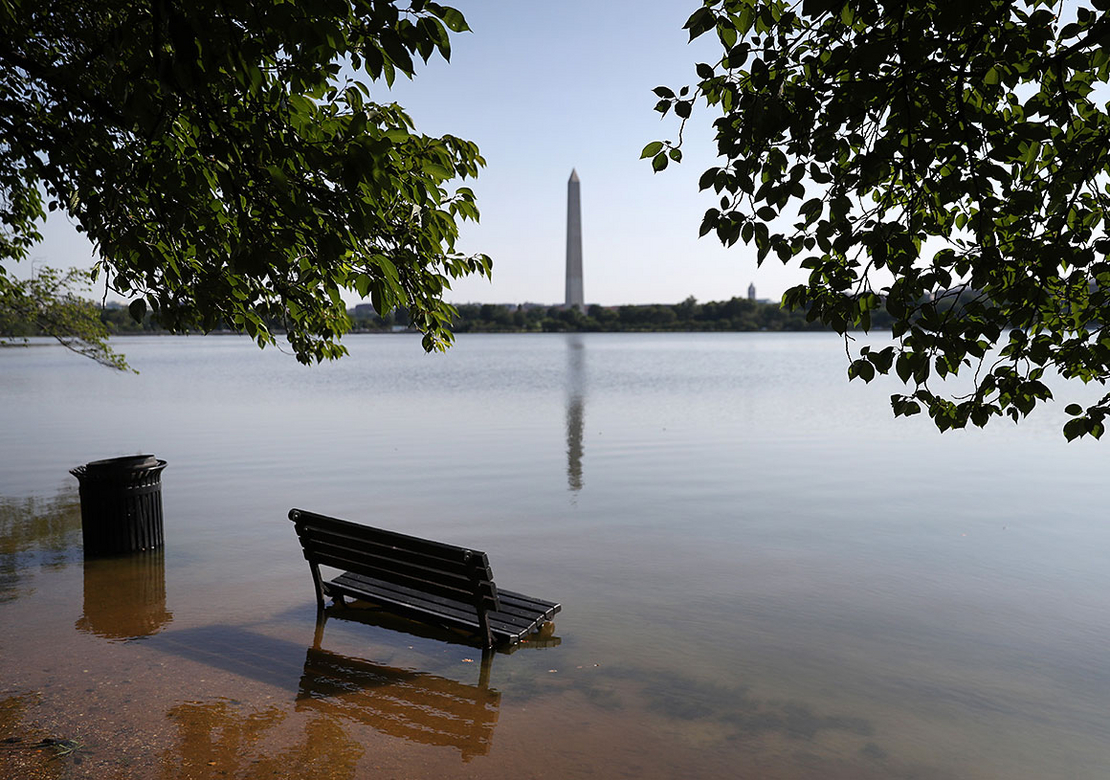 A park bench and sidewalk are flooded in Washington as rising seas routinely go over the Tidal Basin's seawall. The Biden administration is offering climate grants to states for mitigation projects like seawalls. Mark Wilson/Getty Images

President Biden and Congress are unleashing a spending spree for climate projects that may provide more money than states can handle.

Experts warn that disadvantaged communities most threatened by rising temperatures could be bypassed by the funding splurge, which comes as many states struggle to spend grants they received years ago for climate mitigation projects related to flooding, storms and wildfires.

Biden announced this month that he was distributing a total of $3.5 billion to all 50 states through the federal Hazard Mitigation Grant Program. But the program already has $8 billion in unspent grants that have been allocated to states, an E&E News analysis of federal records shows.

Some of the $8 billion was approved for states two decades ago.

The backlog comes as Congress is looking to give states a separate block of funding — also amounting to $3.5 billion — for projects that minimize damage from flooding. The money, included in the $1 trillion infrastructure bill approved by the Senate, would be allocated over the next five years through the federal Flood Mitigation Assistance program.

But the $3.5 billion is twice as much money as states have requested through the flood program over the past five years, federal records show.

“It’s a great headline, but my concern is that it gives a bit of false hope that we’re flooded with mitigation money,” said Amelia Muccio, director of mitigation at Hagerty Consulting Inc.

The surge of federal funds could cause longer delays in states that are trying to spend billions of dollars they received years ago from the Federal Emergency Management Agency, which runs both of the grant programs targeted for extra cash, according to some experts.

“If FEMA and states and subapplicants now pivot to submit new subapplications, what’s going to happen to these previous projects?” Muccio said. “It strains the limited resources.”

Muccio wrote in a recent blog that the new funding, “while incredibly helpful and needed, will tack on billions more in funding to an already backlogged system.”

The new funding also is raising concerns about equity as the Biden administration seeks to target disadvantaged communities in the federal effort to address climate change.

Less-affluent states and communities have struggled to spend FEMA mitigation grants because they cover only 75% of the cost of projects, said Craig Fugate, who ran FEMA during the Obama administration. The remaining 25% must come from states or localities — a cost-share that some jurisdictions cannot afford.

“If FEMA is not doing anything any differently, they’re going to run into the same problems as they have in the past,” Fugate said in an interview. “Maybe this will spur state legislatures to look at ways to spend the money because of the size of the funds.”

Natalie Snider, senior director of coastal resilience at the Environmental Defense Fund, said, “There is a huge concern that the cost-share requirements are going to perpetuate and widen this flood-risk gap.”

FEMA has not changed any of its rules for spending the billions announced by Biden.

In a statement to E&E News, FEMA said states can account for their 25% share using in-kind contributions such as volunteer hours or disaster funds from the Department of Housing and Urban Development.

“FEMA encourages communities to consider all allowable alternatives to meet grant cost-share requirements,” the agency wrote in an email.

FEMA also said that it is trying to “reduce the complexity” of the Hazard Mitigation Grant Program and work with states on spending plans.

The hazard program has been particularly difficult for states because the allocations are often more than they can spend.

States receive a hazard-mitigation allocation every time the White House declares a state a federal disaster. The allocation is supplemental to the disaster relief money that FEMA gives states for immediate repairs and is aimed at making long-term improvements that prevent future damage. The allocation is typically equal to 15% of the FEMA disaster-relief funds.

But the hazard mitigation allocations can be so large that states take years or decades to spend them and often return unspent money to FEMA.

Puerto Rico has spent only 4% of the $3 billion hazard mitigation allocation it received after Hurricane Maria in 2017. But the territory is receiving another $42 million under Biden’s allocation.

Texas is getting the largest share of Biden’s allocation, a total of $666 million. But Texas still has not spent more than $500 million in hazard mitigation funding that it got four years ago after Hurricane Harvey devastated the southeastern part of the state.

“There’s still a lot of money out there,” said Muccio of Hagerty Consulting.

E&E News analyzed the 1,300 hazard mitigation allocations that FEMA has declared closed, which indicates the spending is finalized, and found that the allocations remained open for an average of seven years.

Of the $7 billion that was given to states in those 1,300 allocations, states failed to spend a total of $1 billion and gave it back to FEMA, E&E News found.

Biden’s $3.5 billion allocation comes from his decision to give states as well as five territories, three tribes and the District of Columbia hazard mitigation funding to supplement the federal disaster aid they received for the coronavirus pandemic.

Unlike the hazard mitigation program, the flood mitigation grants are competitive, which means that once a year, states apply to FEMA for a share of the annual allocation from Congress.

In the past five years, Congress has given FEMA a total of $930 million to distribute for flood projects that involve measures such as demolishing or elevating flood-prone homes. States have sought a total of $1.7 billion in those five years, which is less than half the amount Congress would allocate under the sweeping infrastructure bill that awaits action in the House of Representatives.

FEMA says it needs billions of dollars to mitigate the roughly 30,000 homes that are flooded repeatedly. But those projects are often not undertaken because homeowners usually have to pay 25% of the cost, or tens of thousands of dollars.