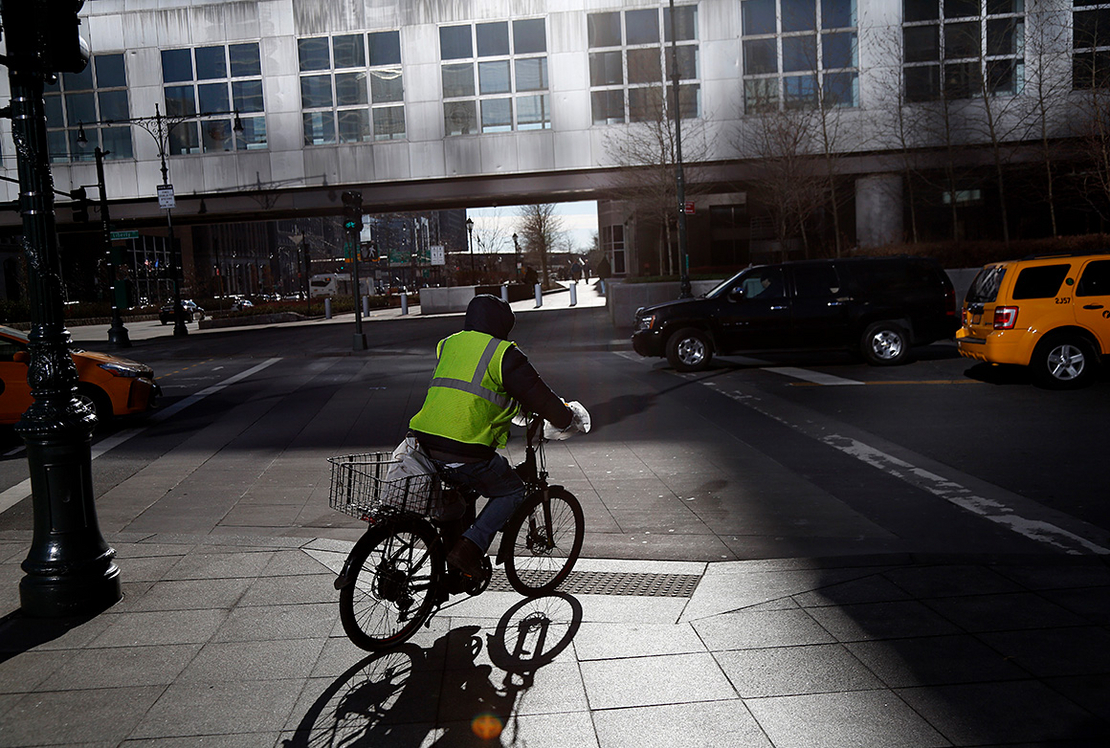 A man makes deliveries on an electric bike in New York City. The reconciliation package before Congress includes a historic level of subsidies for e-bike purchases. AP Photo/Seth Wenig

When President Biden last week announced that Democrats had agreed to a hard-fought framework for their "Build Back Better" legislation, he touted climate provisions that seek to promote electric rail systems, electric school buses and electric vehicles.

Unmentioned in his closing pitch for the slimmed-down $1.7 trillion spending bill was the billions of dollars it contains to subsidize the purchase of electric bicycles. It’s a rapidly growing sector of the booming bicycle market that’s already projected to double in value over the next five years.

"The bill could be really important for e-bike uptake," said Christopher Cherry, a University of Tennessee, Knoxville, civil engineering professor who studies sustainable transportation. "Obviously, one of the biggest barriers to e-bikes is the sticker shock and having people get over that is really important."

The near-final text of the "Build Back Better" bill would make bikes with small electric motors more affordable by offering consumers a tax credit worth 30 percent of the cost of an e-bike, which are generally sold for between $1,500 and $4,000. The legislation would also increase a pre-tax bicycling commuter benefit from $20 per month to $81.

Democratic leaders are hoping to pass the legislation — along with a $1.2 trillion infrastructure bill with billions for traffic calming and bike trail expansions — via budget reconciliation in order to avoid a Republican filibuster. Biden, who left on a whirlwind international trip after pitching the reconciliation bill, is counting on the legislation to cut the nation’s planet-warming emissions in half by 2030 from 2005 levels.

The proposed subsidy would be capped at $1,500 and be limited to e-bikes that cost less than $8,000. It would also be fully refundable, meaning that tax filers who don’t owe income taxes could still get the money back from the U.S. Treasury.

The tax credit is only authorized until 2026. It would also begin to phase out for e-bike buyers who make more than $75,000 annually or married couples who earn over $150,000 per year.

The Democratic push to promote bicycling comes as interest in e-bikes is booming around the globe. The bikes, which are easier to ride than unassisted bicycles, are increasingly seen as climate-friendly substitutes for gasoline-powered automobiles or delivery vehicles (Energywire, Dec. 7, 2020).

The worldwide e-bike market was valued at nearly $23.9 billion at the end of last year, according to Mordor Intelligence, a financial research firm. Europe accounted for approximately 39 percent of the market, the largest regional share.

Mordor estimates that the global market will be worth almost $47.7 billion in five years, even without the U.S. e-bike tax credit.

The e-bike subsidy was proposed in February by Rep. Jimmy Panetta, a Democrat who represents a swath of California’s central coast. His "Electric Bicycle Incentive Kickstart for the Environment (E-BIKE) Act" was co-sponsored by Rep. Earl Blumenauer (D-Ore.), chair of the Congressional Bike Caucus.

Across the Capitol, the credit was introduced by Democratic Sens. Brian Schatz of Hawaii and Ed Markey of Massachusetts (Climatewire, July 23).

Panetta credits the subsidy’s broad support for its continued inclusion in the reconciliation bill, which had its original $3.5 trillion price tag slashed by more than half to win the support of holdout Democratic Sens. Joe Manchin of West Virginia and Kyrsten Sinema of Arizona.

"I began looking into possible electric bicycle credits in 2019, after seeing their success in reducing emissions and car trips throughout Europe and in some U.S. cities," Panetta told E&E News. "I then consulted with local biking communities in Monterey and Santa Cruz, local bike shops and manufacturers, and climate advocacy organizations."

Because the reconciliation bill hasn’t been scored yet by the Joint Committee on Taxation, it’s unclear how much the subsidy would cost if enacted. An earlier version of the credit, which would’ve covered 15 percent of the price of an e-bike over a decade, and the bicycle commuter benefit increase were estimated to cost $7.4 billion.

While the tax credit could jolt demand for e-bikes, it won’t fix the car-centric infrastructure that makes biking unsafe in many parts of the country, experts say.

The bipartisan infrastructure bill, which is currently stalled in the House, authorizes programs that would bolster bike trail connection projects and allow state transportation departments to spend more on safety projects. But most of its funding is directed toward updating highways and bridges for cars and trucks.