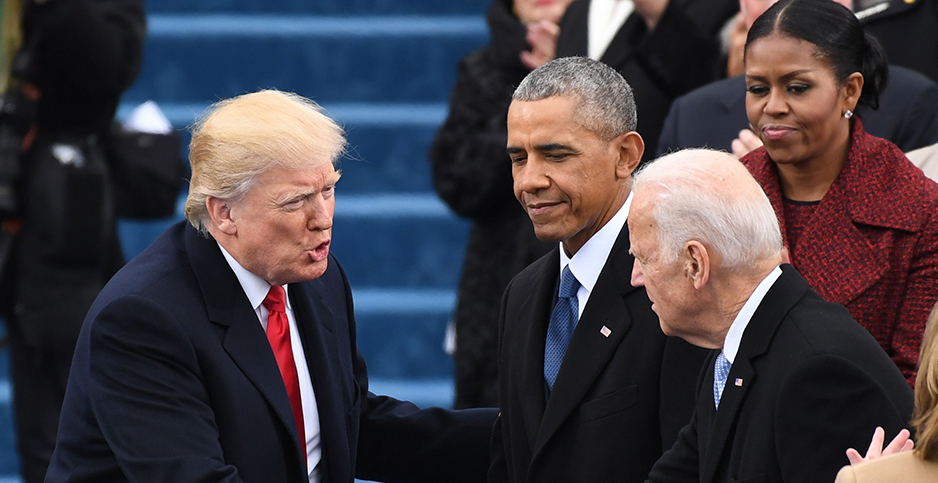 When Joe Biden became the Democrats’ presumptive presidential nominee this month, he beat a rival — Sen. Bernie Sanders of Vermont — powered by the Green New Deal.

But the American public wouldn’t know that from listening to President Trump, his campaign staff and surrogates.

The Trump campaign has settled on its main line of attack against the former vice president’s climate change and environmental platform: painting him in the Sanders mold as a fervent Green New Deal supporter who wants to ban fracking from the get-go and end fossil fuels and the jobs that depend on them.

"Joe Biden likes to tout himself as a moderate. We know that’s not true, because Joe Biden has pushed for the economically disastrous Green New Deal, which would kill hundreds of thousands of energy jobs and wreak havoc on states like Pennsylvania, which he claims as his home state," Lara Trump, the president’s daughter-in-law, said on a campaign webcast last week.

"Joe Biden is a guy who is adhering to the wishes of the extreme left. And he has already called for the enactment of the Green New Deal if there is more rounds of relief legislation for the coronavirus," Tim Murtaugh, the campaign’s communications director, said on another webcast.

The rhetoric from Donald Trump Jr., the president’s oldest son and aggressive campaigner, wasn’t much different.

"He doesn’t want our energy independence. He doesn’t want the tens and hundreds of thousands of jobs, the economy aspect of all of that. And instead, what, we’re going to import all of our energy from Russia and Saudi Arabia? I mean, it’s nonsensical," he said during another campaign show.

Biden’s actual platform calls for the United States to reach net-zero greenhouse gas emissions — which would leave little room for fossil fuels — by 2050.

He calls the Green New Deal "a crucial framework for meeting the climate challenges we face" but stops short of endorsing or embracing it.

And while he appeared to endorse a fracking ban in a March debate, his campaign staff later walked it back. He has said elsewhere he wouldn’t support banning the oil and natural gas production process.

Biden has labeled Sanders’ Green New Deal as "impossible." Sanders, in turn, said Biden’s platform is "nowhere near enough," while the Sunrise Movement, which backed Sanders, gave Biden a grade of F-minus on climate.

But Biden told reporters last month he saw an "opportunity" in the debate over coronavirus recovery legislation "to use my green economy — my Green Deal — to generate both growth, consistent with the kind of infusion of monies we need into the system to keep it going."

That hasn’t stopped Trump’s campaign from seeking to tie the two together, betting that voters would find the Green New Deal off-putting enough to sway key swing states such as Pennsylvania and Wisconsin to Trump.

"President Trump has been a stalwart champion of American energy workers, whose hard work and ingenuity resulted in the U.S. becoming the world’s No. 1 producer of oil and natural gas. Joe Biden, on the other hand, has openly pledged to ‘sacrifice’ energy jobs and ban fossil fuels in pursuit of his extreme environmental agenda," Trump campaign spokeswoman Sarah Matthews said, pointing to Biden’s Green Deal comments.

Trump backer’s are not the only ones hounding Biden about the Green New Deal and other policies. Now that he’s becoming the Democrats’ standard-bearer, activists and politicians like Rep. Alexandria Ocasio-Cortez (D-N.Y.) are pushing him to the left (Greenwire, April 15).

This morning the League of Conservation Voters Action Fund announced it was backing Biden.

"Voters are demanding action and we are confident that as president, Biden will immediately put our country on track for a 100 percent clean energy economy with policies centered in justice and equity that restore America’s global climate leadership.”

Mike McKenna, a strategist and former lobbyist who recently worked in the White House’s legislative affairs office, said the Trump campaign is right to focus on fighting the presumptive nominee’s moderate image.

"Vice President Biden, ostensibly the most centrist of the candidates, now has to deal with all of the things he said and agreed to during the primary campaign," he said.

"It would be malpractice for the Trump campaign to fail to alert voters to these things," he said, "especially since, at least with respect to energy, they are specifically designed to make energy more expensive."