Why Biden won’t talk about Tesla 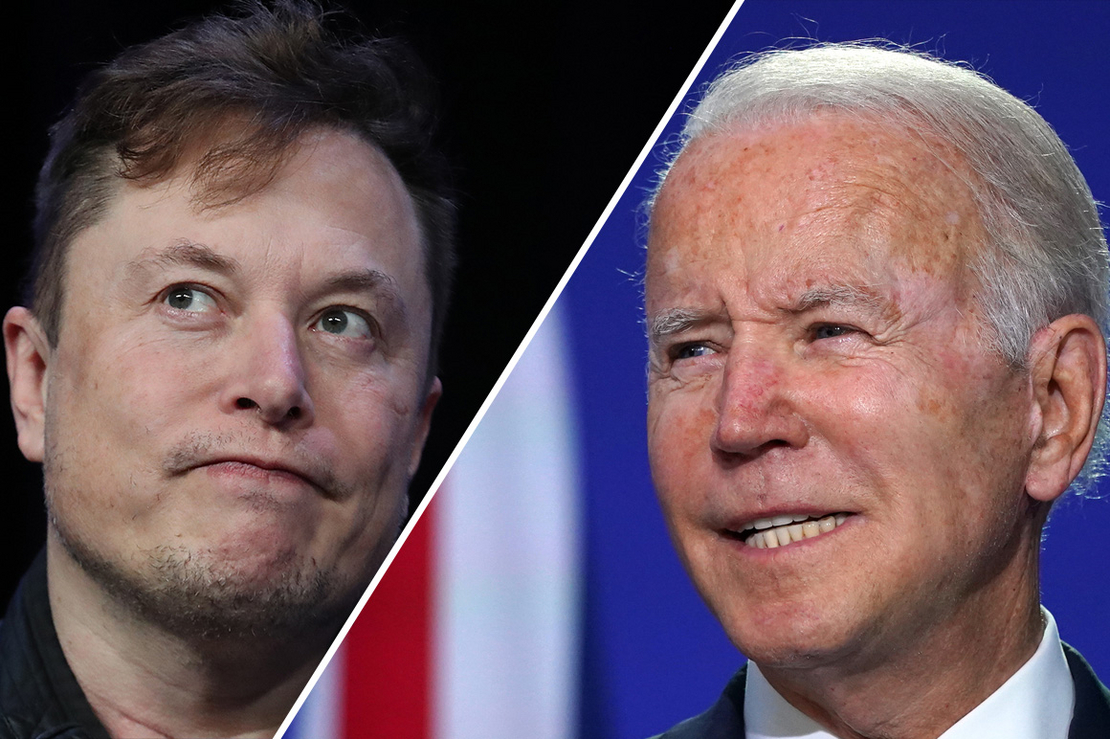 Tesla Inc. may be the most talked-about automaker in America, but President Biden doesn’t want to talk about it.

In the first year of the Biden administration, Tesla and its CEO, Elon Musk, have become difficult to ignore. A rocketing stock price has made Tesla the world’s most valuable automaker, Musk is the world’s richest person whose tweets can influence the stock market, and Tesla continues to make far more electric vehicles than anyone else.

Meanwhile, Biden is a staunchly pro-EV president who is pushing legislation to make the technology commonplace. He cheerleads any move toward electrification by American automakers — as long as the maker in question is a traditional one like Ford Motor Co. and General Motors Co.

But Tesla? He and his lieutenants scarcely ever speak its name.

The omission has now sparked a mini-movement — led by Musk — to force Biden to acknowledge Tesla, and created a strange standoff between Biden and some of the most passionate EV drivers.

While there are plenty of reasons that Biden and Musk might not see eye to eye, the White House’s snub probably comes down to one thing, analysts say.

"I think the main reason has to do with Tesla and Musk’s vehemently anti-union stance," said Sam Abuelsamid, an electric mobility analyst for the consultancy Guidehouse Insights.

A review of public comments by Biden, Vice President Kamala Harris, press secretary Jen Psaki and two Cabinet secretaries whose portfolio overlaps with Tesla — Energy Secretary Jennifer Granholm and Transportation Secretary Pete Buttegieg — finds that the name of the nation’s leading EV manufacturer has been invoked only a handful of times at White House briefings and agency press conferences and events.

The omission is particularly apparent in the White House briefing room, where Psaki has been asked on several occasions about the many ways that Tesla and Musk intersect with the day’s headlines, from tax policy to automated transportation.

Psaki has said the company’s name three times at the briefings, twice in the context of a crash investigation into Tesla vehicles. Psaki usually replies to questions about Tesla or Musk without invoking the subject of the questioner’s sentence.

"I don’t have any reaction to his comments," Psaki said when asked about Musk’s comment on cryptocurrency in September. "They don’t impact our policy, I would say. I guess that’s my reaction."

By contrast, Biden administration officials have praised Ford and GM’s electrification plans directly. In May, before a Biden visit to Ford, Psaki said, "we’re looking forward to going to visit the Ford Motor Co. and to preview, see the F-150 Lightning and the exciting technologies that make it possible." In April, Granholm — herself a former governor of Michigan, where both companies are based — said at a White House press briefing in April that "General Motors is saying that their entire fleet is going to be electrified."

A White House spokesman didn’t respond to a request to comment.

The zipped lip on Tesla is a contrast to the attention Biden showers on traditional American auto companies and their nascent efforts to build EVs.

In August, on the same day that Biden signed an executive order targeting half of new U.S. passenger vehicles to be electric by 2030, he held an auto summit at the White House attended by the CEOs of GM and Ford and the North American chief operating officer of Stellantis NV, the parent company of Jeep, Dodge and Chrysler. Tesla was not invited.

In May, Biden visited Ford’s under-construction electric auto plant in Dearborn, Mich. This month, he paid a similar call to GM’s Factory Zero in Detroit.

In both cases, he test drove prototypes of the companies’ EVs and showered them with praise, including the Ford F-150 Lightning ("This sucker’s quick!") and the GMC Hummer ("one hell of a vehicle").

By contrast, Biden, who often refers to himself as a "car guy" and whose father ran auto dealerships that sold Ford, GMs and Chryslers, has not visited Tesla’s plant in California or its vast new auto factory under construction in Texas. If as president he has sat in or driven a Tesla, he has not mentioned it.

Tesla’s acolytes have chafed at the omission ever since Biden took office. But their ire rose to a new level after Nov. 15, when Biden spoke at the opening of GM’s new EV plant in Detroit and addressed GM CEO Mary Barra.

"I can remember your dramatic announcement that by 2035, GM would be 100 percent electric. … You changed the whole story, Mary," Biden said. "You electrified the entire automobile industry. I’m serious."

That comment evinced some rueful chortles in the Tesla universe. On Twitter, the company’s fans pointed out that if any company is responsible for electrifying the automobile industry, it’s Tesla, which produced the world’s first electric sports car, the Roadster, in 2008. Tesla’s subsequent success in making and marketing EVs eventually rousted GM to follow its lead.

Tesla received a key $456 million loan from DOE in 2010 during the Obama administration, when Biden was vice president. Tesla’s U.S. sales have been greased by the $7,500-per-car federal tax credit, which amounts to $1.5 billion in federal aid.

Soon Musk capitalized on the commentary with a tweet of his own:

“Let’s see if we can get them to say the word ‘Tesla’!" Musk wrote.

And Musk’s mother, Maye Musk, a fashion model and celebrity, also piled on, tweeting “Biden’s speech was written 20 years ago, just before GM killed the electric car. His speechwriter uploaded the wrong file.”

Biden has been called the most pro-union president in almost a century (Energywire, March 17).

In the automotive world, the president’s labor agenda is part of a proposal in the "Build Back Better Act," now under consideration in the Senate, to offer a $4,500 subsidy to EVs assembled by union labor (Energywire, Sept. 30).

That subsidy has been roundly criticized by Elon Musk, whose customers would not be eligible for this tax credit because Tesla’s workforce is non-union. It has also come under fire from Republican governors, Canadian officials and Toyota Motor Corp., which ran an ad in The New York Times and other newspapers (Energywire, Nov. 3).

On Twitter, Musk has implied Biden is in the pocket of the United Auto Workers (UAW), which represents Ford and GM employees. Tesla and Musk have been reprimanded by the National Labor Relations Board for pushing employees to reject unions.

One of the administration’s most pointed noncomments about Tesla came when Psaki, Biden’s press secretary, was asked why Tesla was not invited to the president’s auto summit.

"Well, these are the three largest employers of the United Auto Workers," she said, "so I’ll let you draw your own conclusion."

Biden allies in the labor movement don’t hesitate to call out Tesla as a target of Biden’s policies.

"It doesn’t surprise me at all that Biden is not talking about Tesla," said Jason Walsh, the executive director of the BlueGreen Alliance. That group is composed of both environmental and union groups, but doesn’t include UAW.

"He is a president on the side of workers," Walsh went on. "He has rightly centered ‘Build Back Better’ on creating and sustaining good-paying jobs in safe factories where workers have a say in the job, which is the opposite of Tesla in fact."

However, plenty of other reasons exist for the president to not embrace Tesla and its high-profile CEO, according to observers.

Biden is pressing Congress on plans to further tax billionaires. Musk is a billionaire who says the government will only waste the revenue. Biden has made COVID-19 precautions a cornerstone of his presidency; Musk has called them fascist.

Abuelsamid, the auto analyst, pointed out there are also regulatory reasons for Biden not to give Musk a back slap. Tesla is under investigation by the National Highway Traffic Safety Administration for its assurances to drivers that the vehicles’ autopilot features are safe.

"Or if he doesn’t call himself right wing," he added, "he’ s libertarian, and his views alight a lot more with Republicans than with Democrats."

Tesla did not respond to a request for comment.

A question hanging over the White House’s silence is whether the president will pay a political price, considering the criticisms from Tesla’s fans, who are among the largest supporters of the EV lifestyle.

"Nobody deserves more credit than Tesla, and President Biden and the entire U.S. administration has ignored Tesla, has leaned into all the other companies, and it’s just frustrating," said Galileo Russell, a tech commentator on YouTube.

But analysts said that alienating some of Musk’s followers may be well worth the creation of loyalty elsewhere.

"I don’t think it’s a terrible surprise for a self-described car guy and union guy like Biden to be stressing the Big Three," said Susan Demas, the editor of Michigan Advance, a progressive news outlet, speaking of the Midwest’s traditional auto industry players. "Those are union jobs, those are the heart of his base. That’s got to be why he stresses their work so much.

"Elon Musk’s base, so to speak, even though he is not a politician, is in the tech-bro ethos, and those people are not jammed into places like Lansing, Mich., or Madison, Wis.," Demas said.

And the fact that Fords and Chevrolets are so much more common on those Midwest roads than Teslas means there’s little price to pay for staying mum.

"If there was more of a presence in the so-called Rust Belt," Demas said, "it would be harder to ignore."