Why Calif. will let rising seas ‘knock out’ this building 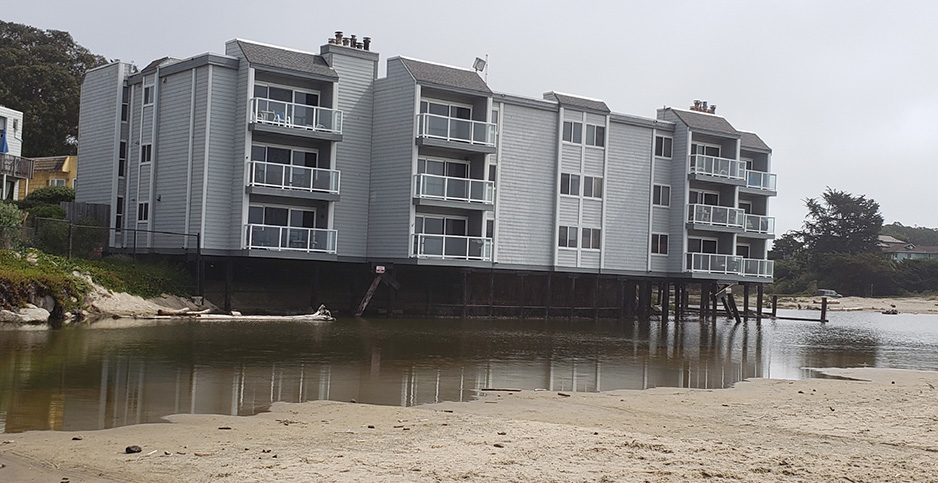 A waterfront condo building appears ideally located in a small California town. It features panoramic ocean views and an easy walk to the surf. Units recently sold for more than $1.6 million.

But the building faces a bleak future. It’s ground zero for the impacts of sea-level rise — and for local planning decisions related to coastal retreat.

Santa Cruz County, a hamlet about 30 miles south of San Jose that just unveiled its proposed climate adaptation plan, wants to restrict the construction of new sea walls and let the ocean move onto land in some locations. That means trouble for the condo building, which sits steps from a lagoon that drains into the Pacific Ocean.

"One day the sea will knock out that [building], and that will be the end of that," said John Leopold, a Santa Cruz County supervisor.

That blunt assessment comes as California experiments with some of the most ambitious efforts in the nation to prevent a collision between homeowners and climate change. The California Coastal Commission, a state agency, is pressing local officials to prepare for a future that features more erosion and flooding. That could mean defending homes with sea walls or over the longer term abandoning them.

The condo building is somewhat of a sacrificial lamb, because it’s one of the few residential structures located near a lagoon, where sea walls will be prohibited. The county’s blueprint would also bar walls for coastal farms.

The adaptation plan is part of an update to a local rulebook that goes before the county Board of Supervisors today. The county calls its approach "managed natural retreat," a tweak on the term used to describe removing beachfront homes that are damaged by rising tides.

The threat of sea-level rise is less immediate for most homeowners in Santa Cruz County. Many homes sit on coastal bluffs buttressed by stone "rip rap" or other barricades. The adaptation plan proposes letting those homeowners keep their armor.

The county calls it a "hybrid" approach, one it hopes will gain favor with the California Coastal Commission, a powerful agency that oversees development on 1,100 miles of shoreline. It generally opposes new coastal armor, arguing that it sets a line at the back of the beach that triggers "drowning" of dry sands as waters rise. The state commission also seeks to restrict sea walls for homeowners who redevelop.

Santa Cruz County proposes letting people in urban areas revamp their homes without relinquishing the right to future sea walls. That makes the county "the canary in the coal mine" when it comes to testing how much flexibility the coastal commission will give to local officials, Leopold said.

"We’re going to find out how far we can push it," he said.

"We’re not doing a full managed retreat," Leopold explained. For homeowners with existing armor, "we’re asking to allow us to allow people to maintain their walls, at least a 20-year period until we can gauge what the effects are."

It takes place as the state agency and coastal governments try to find the best way to plan for rising seas. The state agency last year asked local leaders to analyze retreat as an option. Cities including Del Mar and Imperial Beach in San Diego County, and Pacifica, south of San Francisco, sided with homeowners and rejected moves toward retreat (Climatewire, Oct. 7).

The state agency argues that it needs to preserve beaches for all residents, including future generations. It’s recently steered away from using the term "retreat," though it’s advancing policies that some residents argue eventually would lead to the removal of homes. The agency wants homeowners to waive the right to repair or replace sea walls if they make improvements that cumulatively cost more than 50% of their property’s value.

"In some locations along the coast unfortunately in the next 50 to 100 years we’re likely to see pretty unlivable conditions," Cavalieri said. "Part of managed retreat is getting ready for that to happen far down the road."

That time might come eventually for the endangered condo building.

The 12-unit gray and white structure, which can’t add a sea wall under the county’s proposed adaptation plan, was built in 1974 atop a platform on stilts. Located at Corcoran Lagoon Beach, it already sees impacts from extreme storms combined with high tides. Water from the lagoon flows under the platform.

Kathleen Molloy, a Santa Cruz County planning director, said the area hasn’t felt large effects from rising seas yet. But "if it starts making those structures unstable, eventually they won’t be habitable," she added, noting that "we would not build a big ol’ sea wall to protect that development."

An owner of a condo in the building, Bob Hoover, didn’t know about the county’s proposal until asked about it by a reporter. He and his wife, Gale, rent the unit to a tenant.

Hoover, 88, said "it probably isn’t going to affect us in our lifetime here. That’s sort of a narrow way to look at it."

Santa Cruz County, population 276,000, is California’s second-smallest county by miles, behind only San Francisco. It’s known for an amusement park on the beach with a wooden roller coaster and world-renowned surfing spots at Steamer Lane and Pleasure Point.

Houses overlooking the ocean sell for $4 million or more, and the area is popular with Silicon Valley technology entrepreneurs. There are rumors that Facebook Inc. CEO Mark Zuckerberg owns a house in town. "No one is able to tell me where it is," Leopold said.

Much of the county’s coastline runs east to west and features long cliffs overlooking Monterey Bay. During storms, water runs down from the mountains into town. Those storms are expected to worsen with climate change.

Erosion already is eating away at Santa Cruz County cliffs an average of about a foot a year, said Gary Griggs, a coastal expert at the University of California, Santa Cruz.

"The way the rocks fall isn’t in nice 1-foot chunks," he explained. "We may lose 8 or 10 feet at a time, and then nothing happens for five or six years."

Then there’s the risk of higher tides. Defensive structures wouldn’t repel the kind of threats faced by the condo unit.

"We’re right on the sand, so there’s no way to put any kind of a barrier in front," said Hoover, the unit owner. The first story is a maximum 10 feet above the sand, he said, so a sea wall would obscure the first floor. "Eventually I assume the building is going to go."

Any sea wall put there "would have to be fairly massive," said Leopold, the county supervisor, which means "it would take up a lot of the existing if not all of the existing beach."

Santa Cruz County wants concessions from homeowners who get to keep the right to future sea walls when they do home upgrades. Those people will have to agree to stipulate on property deeds that they’re in a hazardous area, waive the county’s liability for future home damages and pay fees to compensate for sand loss. The county would also get to review the home’s situation in 20 years.

"At some point there will be a need most likely to remove structures, or it won’t be … practical or economically feasible to put in a shoreline protection or to repair a shoreline protection device," said Molloy, the Santa Cruz County planning director. "Our approach is to in the meantime let people do things to their home, if they want to do significant remodel or addition to their home," give them a permit.

Some residents aren’t happy about making homeowners disclose risks. Dave Lavelle, owner of a home across the street from the beach, argued that sea-level rise over the next 30 or 40 years will not be extreme.

"We’re overreaching at this point to say, ‘Hey, the sky is falling, the sky is falling,’" Lavelle said at a public meeting earlier this year. "A lot of us have been here 40, 50, 60 years. I think you should back off a little bit, especially on existing properties."

"If we don’t start planning, we could end up in a situation where we have development in harm’s way, blocking access to the beach," she said.