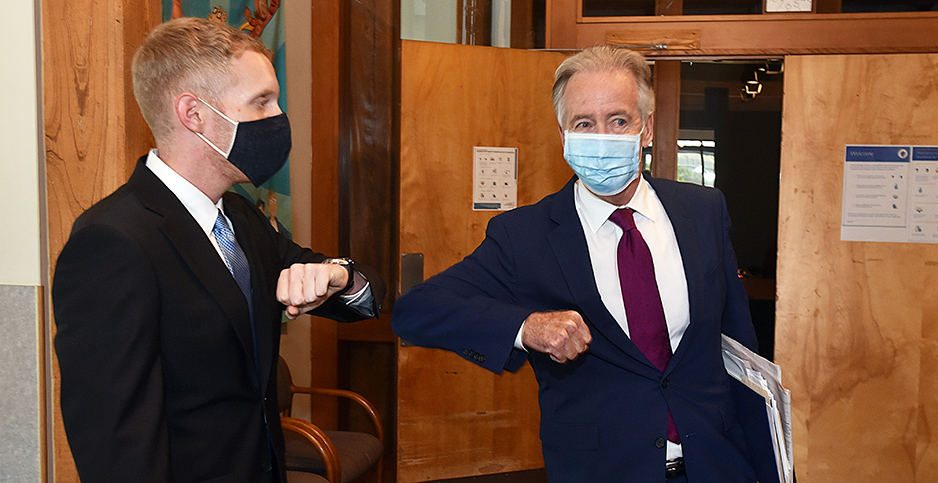 Progressives’ last shot this year to unseat a Democrat who they feel hasn’t done enough comes to a head in rural Massachusetts in 13 days.

Alex Morse, the mayor of Holyoke, is challenging Rep. Richard Neal (D), a longtime incumbent who heads the powerful Ways and Means Committee, for the 1st District seat. It is the most rural district in the Bay State.

Central to the argument from Morse and his allies is that Neal isn’t using his powerful perch and his incumbency to act as urgently as needed to fight climate change.

Morse supports the Green New Deal, while Neal is the only member of the Massachusetts congressional delegation who hasn’t signed onto the proposal. He is, however, complimentary of it.

For his part, Neal argues, he has a decadeslong progressive record on the environment and climate change.

He is a leading co-sponsor of the "Growing Renewable Energy and Efficiency Now (GREEN) Act," House Democrats’ main green energy tax incentive legislation that they passed as part of the large infrastructure package last month (E&E Daily, July 2). The GOP-controlled Senate is not expected to take it up.

"You don’t get what you don’t fight for, and he has not fought for a bold response to the climate crisis. A Green New Deal, the transformative impact it could have here in the 1st District — to create thousands of good-paying, union jobs; to help uplift our farmers and entrepreneurs; to create a jobs guarantee for people here in the district; climate resilience from housing to public infrastructure — is something that would greatly impact and improve outcomes here," Morse said during an interview with E&E News.

"And his M.O. over 30 years has been a tax credit here, a tax credit there, a grant there, rather than addressing the fundamental challenges that are facing us as a nation and a district," Morse said, calling the "GREEN Act" "reflective of his inability to grasp the urgency of the moment and his inability to understand the magnitude of the solutions we need to meet these challenges."

Neal said the Green New Deal is "pretty good" and "provides a great narrative." That’s not to criticize it; the narrative is important, he said.

"That’s how you develop an argument and call attention to issues. But in the end, it’s still legislative skill and achievement," Neal told E&E News.

The "GREEN Act" "is the most assertive use of legislative tax policy in American history to address renewable energy," he said. "And it’s really important to remember here, it actually passed the House of Representatives."

Neal isn’t optimistic the legislation can come to fruition while President Trump is in office, but he is confident Democratic presidential candidate Joe Biden would sign it into law if elected to office (E&E Daily, Aug. 5).

"There’s a pretty sturdy record here of day-to-day environmental consciousness," Neal said of his efforts. Morse, in comparison, is "not even close."

Morse, who said he’s worked aggressively to decarbonize Holyoke, is backed by progressive groups such as the Sunrise Movement, 350 Action and Friends of the Earth Action.

He also has support from Justice Democrats, the organization that helped Rep. Alexandria Ocasio-Cortez (D-N.Y.) win a primary upset in 2018, setting off a wave of progressive primary challenges.

Ariel Moger, political coordinator at Friends of the Earth Action, said supporting Morse aligns with the group’s goal of getting lawmakers into office who take seriously the threat of climate change.

She called it "unacceptable" that Neal hasn’t signed onto the Green New Deal or sufficiently used his position to confront climate change.

"When we have a climate crisis as well as other public health crises taking place, it’s more important than ever for our leaders, especially those who are in leadership in the House, to be promoting a progressive agenda that’s going to help take care of not only the people in his district, but to pass legislation that would improve the lives of Americans in general," Moger said.

The Sept. 1 Massachusetts primary — in which progressives will also try to defend Sen. Ed Markey from a primary challenge by Rep. Joe Kennedy III — could be big (E&E Daily, Aug. 10).

"Overall, I think the message of 2020 is clear: People are ready for big change," Sunrise spokesperson Stevie O’Hanlon said, tying the primaries to justice-focused protests and action around the country.

"This progressive energy, led by young people and led by people of color, is going to set the terms for Joe Biden’s administration, whether he likes it or not," O’Hanlon said. "Having another win on Sept. 1 would only make that more clear."

Samantha Pettey, a political science professor at the Massachusetts College of Liberal Arts, said Neal has had primary challenges before, but none as qualified as Morse.

The progressive victories around the country since the 2018 election cycle have set a new bar for primary challenges, Pettey said, and Neal could be in trouble.

"These are high-profile politicians with heavy roles in Congress who voters have decided, ‘Hey, we want a change,’" Pettey said. "I wouldn’t say Neal has been asleep at the wheel by any means, but that doesn’t necessarily mean it’s been enough for him."