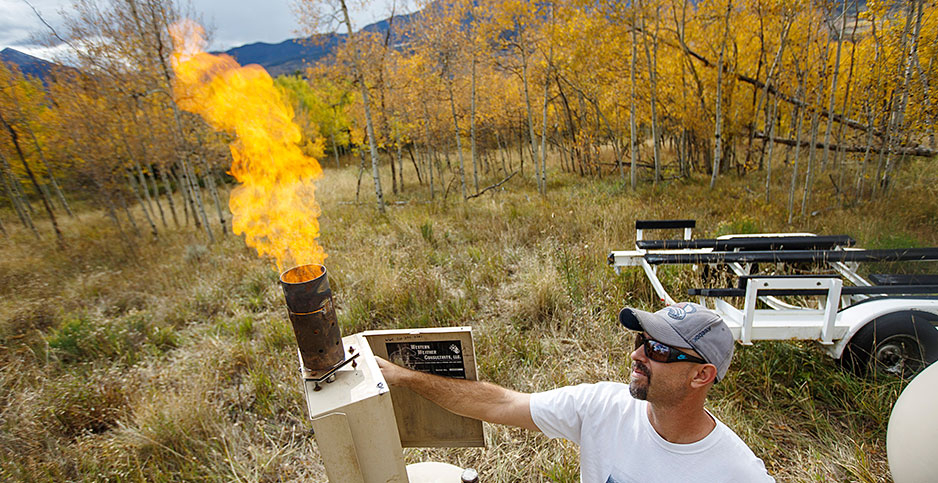 A cloud seeding generator fires particles into the sky over Colorado in 2017. Weather modification is gaining attention as a way to combat climate change. Hugh Carey/Summit Daily News via AP

Part two in a series. Read the first story here.

Scientists are investigating an unconventional way to combat climate-driven drought in the western U.S.: spraying clouds with special particles to make them dump more snow.

It’s a strategy known as "cloud seeding." And although controlling the weather sounds as if it belongs in the distant future, it’s actually been around for decades. At least eight states and dozens of countries use it to try to boost precipitation.

Interest in cloud seeding is growing as the planet warms — not just among water managers, but scientists as well. Rising temperatures are a growing threat to water resources across much of the western U.S.

A long-lasting "megadrought" has gripped the region for the last 20 years. Research suggests it’s in large part driven by climate change. Meanwhile, shorter snow seasons and earlier snowmelt have contributed to dwindling snowpack across large swaths of the Mountain West, a vital source of fresh water for millions of people.

Major water systems, such as the Rio Grande and the Colorado River, have been experiencing diminishing flow in recent years. States in the Colorado River Basin are currently engaged in negotiations about how to manage their shared water resources amid the looming threat of future water shortages.

Cloud seeding is, in many ways, an attractive strategy to boost water resources. It’s relatively easy and inexpensive. That makes it low risk for a potentially big payoff.

But although the theory behind cloud seeding is simple enough, the science is a lot more complicated.

Researchers are only scratching the surface on how well cloud seeding actually works, despite the fact that it’s been in use for decades. So far, experts believe it produces only modest results.

And if cloud seeding has a small effect today, it’s even less certain how well it might work in the future.

"In a changing climate, things are even more uncertain," said Jeff French, an atmospheric scientist at the University of Wyoming.

The physics behind cloud seeding is relatively simple. Spraying clouds with certain types of particles — most commonly crushed-up silver iodide — can help ice crystals form inside the cloud and slightly boost the production of snowfall.

Still, cloud seeding requires a narrow set of conditions to be possible in the first place.

There needs to be clouds in the air, and those clouds must contain supercooled liquid water — water that stays in its liquid form even in below-freezing conditions, a special state of matter that’s possible high up in the atmosphere. That means air temperatures around the cloud need to be below freezing but not too cold — typically above 5 degrees Fahrenheit or so.

The big question today is whether warming will have any effect on how often those conditions align.

Scientists have just begun to investigate. Bart Geerts, a cloud expert at the University of Wyoming, is one of the few who’s delved into it.

Geerts and his colleagues conducted a series of model simulations to project what the world might look like in 2050 under a severe climate change scenario. As temperatures rise, the simulations suggest there could be as much as a 50% reduction in the times that conditions are suitable for cloud seeding.

When conditions happen to be right, clouds may contain slightly more liquid water than they used to. It’s possible that could translate into heavier precipitation, although the study didn’t investigate that far.

Geerts cautioned that these are early findings. The study has been submitted to a scientific journal and is undergoing review, but it has not yet been published. That means other scientists haven’t had a chance to weigh in on the results.

But some scientists say they’ve observed similar patterns in recent years, which may be linked to climate change. Frank McDonough, director of the cloud seeding program at the Desert Research Institute in Nevada, says snowstorms in the Sierra Nevada seem to be happening less often, but they’re dumping more snow when they do occur.

"It seems like we’re having more heavy storms when these storms come in, and we have weeks of dry periods," he said.

He added that snowstorms are also inching higher into the mountains as the climate warms. There’s typically a threshold at lower elevations where snow turns to rain — and that threshold has crept about 1,000 feet higher over the last two or three decades, he said.

"That starts to make ground-based cloud seeding more difficult," McDonough said. "You need to get [the silver iodide] higher into the air."

With all of these uncertainties, why keep doing it?

In the water-stressed West, every drop counts — and more so every year as the region grows warmer and drier. Shoring up water reservoirs when times are good could be worth it if there’s a little extra to draw from when times are bad.

McDonough, for his part, says the practice is worth it from that perspective.

"If a big winter comes by, you can hit a bunch of cloud seeding and help boost that snowpack," said McDonough. If the next winter is dry, he said, then hopefully there’s a little extra supply available from the previous year.

Scientists are still working to determine exactly how much of a difference cloud seeding can make on a large scale, both today and in a warmer future. Recent technological advancements have made it easier for scientists to evaluate cloud seeding operations, meaning answers may be on the way.

"It will still take a number of years, but we’re gaining more insights," Geerts said. "And at that point it will be up to whomever — the stakeholders, politicians — to decide whether this is even worth doing."

For now, though, many experts agree that cloud seeding is likely to be a relatively minor tool when it comes to dealing with climate change and drought.

"Cloud seeding has to be seen in the context of the broader picture," said Katja Friedrich, an atmospheric scientist and cloud seeding expert at the University of Colorado, Boulder.

Western water management plans include strategies both for bolstering water reservoirs when it’s possible and for conserving those limited water supplies during droughts. Many of these strategies are far less uncertain and likely able to save far more water.

That doesn’t mean cloud seeding has no place in the arsenal, she said — but it’s better off as just one tool among many.

French, the University of Wyoming scientist, agreed that cloud seeding shouldn’t be the primary component of any Western climate adaptation plans. Even the most optimistic predictions about its effectiveness suggest it won’t make a big dent in a strong drought.

"I wouldn’t make cloud seeding the centerpiece [of water management plans], even if we knew that it worked," he said. "It’s a tool — it could be part of the toolbox for sure."