Why CO2 isn’t falling more during a global lockdown 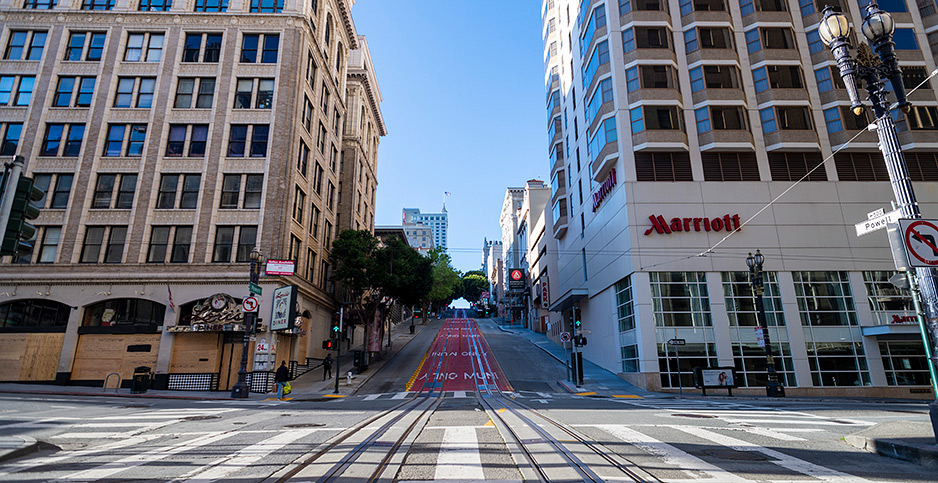 Empty streets in San Francisco. Emissions from vehicles have plummeted, but they're holding steady in other sectors as the pandemic continues. Yichuan Cao/Sipa USA/Newscom

About 4 billion people around the world are under lockdown to help stem the spread of the novel coronavirus. Given that huge number, the drop in global greenhouse gases seems almost paltry by comparison.

Forecasters expect emissions to fall more than 5% in 2020, the greatest annual reduction on record. But it’s still short of the 7.6% decline that scientists say is needed every year over the next decade to stop global temperatures from rising more than 1.5 degrees Celsius.

"If you assume a proportional decline in [gross domestic product] and emissions, what feels like an economical catastrophe is a fairly modest reduction in emissions compared to where we need to go," said Trevor Houser, who leads climate and energy research at the Rhodium Group, a research firm.

So why aren’t forecasts projecting a bigger drop in CO2 during one of the worst economic catastrophes in a lifetime?

The answers are rooted in how emissions forecasts are developed, the way our energy system is structured and how the pandemic is causing an economic free fall that differs from previous recessions.

Here’s a look at why emissions aren’t falling faster during the global lockdown.

If quarantine measures continue through the year, carbon dioxide reductions could exceed forecasts

Carbon Brief analyzed the emissions impact of China’s shutdown earlier this year. It concluded that emissions dropped 25% over a four-week period beginning Feb. 3. Emissions began to rebound as normal life in China showed signs of resuming.

In the United States, emissions were likely 15%-20% lower between March 15 and April 14 compared with the same period last year, according to a recent report by Rhodium.

So why aren’t those deeper reductions reflected in the annual projections?

That may be optimistic.

It seems increasingly likely that lockdowns could persist in some parts of the world through 2020. Still, reductions in emissions that are anywhere close to those that occurred in March and April would be staggering.

So even in a scenario where emissions fell 25%, three-quarters of global CO2 output would continue during a yearlong lockdown.

Unlike past recessions, transportation is driving the decline in emissions

Normally in a recession, you’d expect CO2 reductions to be associated with declines in manufacturing and shipping, said Houser of Rhodium. Almost the opposite has happened this year.

Shipping remains constant, and manufacturing has been slow to shut down. As Carbon Brief noted, Beijing even recorded a severe smog day during China’s lockdown. Many steel and coal plants continued to run throughout the shutdown, though often at reduced levels.

Air travel, meanwhile, was down 40% in the 12 weeks since China reported its first 500 cases of COVID-19. In Europe, nine out of every 10 flights have been grounded.

The result has been a historic collapse in oil demand.

The global appetite for jet fuel will likely fall 65% in April and May compared with last year. In the U.S., gasoline demand for the four weeks ending April 17 fell 41% compared with the same time last year, according to Department of Energy statistics.

Call it the crude disappearing act of 2020.

And yet the global economy is still consuming lots of oil.

Lost amid the hubbub around oil is this: IEA still expects the world to consume 76.1 million barrels a day in the second quarter of this year.

Who’s consuming all of that crude? For starters, gasoline and jet fuel demand is down dramatically but hasn’t disappeared. U.S. refiners sent an average of 5.5 million barrels of gasoline to the market over the last four weeks.

Diesel demand is down, but its losses have been limited thanks to the strength of freight and shipping. IEA expects diesel demand in 2020 to be down 7% compared with the previous year.

Then there are petrochemicals, which have been unevenly impacted by the crisis. Plastics used in auto manufacturing are down, but plastics used for food packaging are up.

Overall, IEA thinks demand for plastic feedstocks like ethane and naphtha will decline on the year, but not to the same degree as gasoline or diesel.

The numbers illustrate just how intertwined oil is with the global economy. Cars and planes can be parked en masse, and yet widespread oil consumption continues.

"The crisis shows how challenging decarbonizing the economy purely through behavioral adjustment would be," Houser said, noting that individual decisions about not driving or flying deliver only limited emissions reductions.

"What we need are technological solutions that allow our economy to operate at 100% with 5%-8% annual reductions going forward," he said.

Transportation is a big piece of the emissions puzzle. But it’s only one piece

"It’s a big number, but 80% is everything else," said Rob Jackson, a Stanford University professor who chairs the GCP.

Of the pandemic, he added: "Only transportation has fallen off a cliff. Electricity has fallen a little bit, natural gas has too."

Indeed, emissions from coal use in China alone (7.3 gigatons) exceed global transportation emissions, excluding international air travel and shipping. Coal generation in China appears to have fallen during February, but it began to rebound in March, according to Carbon Brief.

Coal is being squeezed by the pandemic, but it remains crucial to electricity generation around the world.

Coal accounts for 40% of global CO2 emissions, more than any other fuel. Much like oil, coal generation is suffering during the pandemic. But also like oil, it remains a central cog in economic production worldwide.

Coal amounted to 15% of American power generation over the last month, according to Rhodium, compared with 22% at the same time last year. European coal demand is expected to fall by almost 13%, according to the Independent Commodity Intelligence Services.

In India, daily figures from the national grid operator show coal generation hovering near 1.9 gigawatt-hours this week compared with 2.3 GWh on March 24, the day the country went into lockdown. Coal nevertheless accounted for roughly two-thirds of power generation Monday through Wednesday.

India’s coal emissions were 1.7 gigatons in 2019, according to the GCP, compared with coal emissions of 1.1 gigatons and 0.8 gigaton in the U.S. and Europe, respectively.

Zeke Hausfather, director of climate and energy at the Breakthrough Institute, said the pandemic underscores the need to make clean energy affordable for developing parts of the world.

"There is just a huge amount of technology needed to drive the decarbonization that the world wants," he said. "What really happens with climate change really comes down to China and India, and there is not much appetite to sacrifice economic growth for emission reduction."

Correction: An earlier version of this story misstated the emissions reductions needed to keep global temperatures from rising 1.5 degrees Celsius. It is 7.6% annually in the next decade.