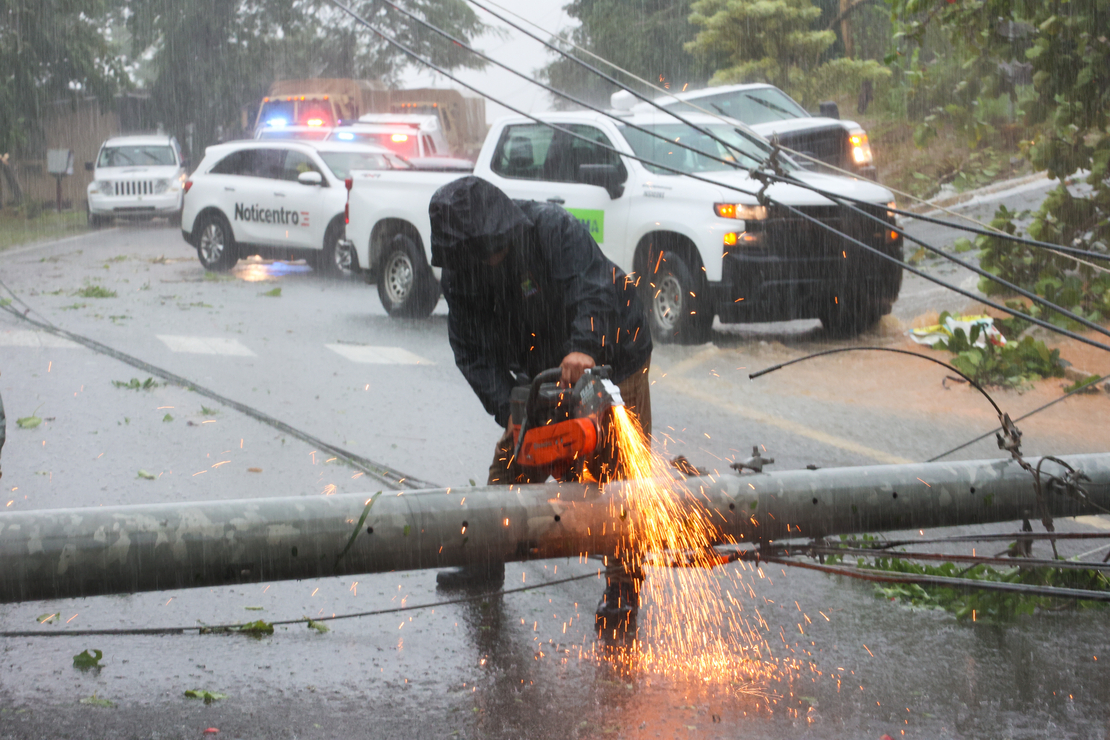 A worker is shown Sunday cutting an electricity pole downed by Hurricane Fiona as it blocked a road in Cayey, Puerto Rico. Stephanie Rojas/AP Photo

A Category 1 hurricane that knocked out power across Puerto Rico raises questions about whether climate change is intensifying the damage caused by moderate storms and why the territory’s infrastructure remains fragile five years after Hurricane Maria pulverized the island.

The power loss forced the closure of public schools through at least Tuesday and caused the loss of cellphone service in parts of Puerto Rico and bewilderment at Fiona’s destructive capacity.

Puerto Rico Gov. Pedro Pierluisi called Fiona’s damage “catastrophic” and said parts of the territory had received more rain than during Hurricane Maria in 2017, a Category 4 storm that demolished the island and killed more than 3,000 people.

Seven percent of the territory’s cellphone towers were out of service on Sunday, according to a Federal Communications Commission report, and the number of outages could increase.

Roughly 100,000 of Puerto Rico’s 1.5 million electricity customers had their power restored on Monday.

Preliminary reports suggest that some parts of Puerto Rico had received nearly 28 inches of rain since Fiona made landfall Sunday afternoon as a Category 1 storm. The National Hurricane Center said some areas may receive more than 30 inches. Maria dumped 41 inches in a day — one of the highest precipitation levels on record for Puerto Rico.

A 2019 analysis of hurricane rains in Puerto Rico found that only a handful of storms had produced more than 20 inches of maximum rainfall since the 1950s and that climate change has made a massive rainfall event similar to Maria nearly five times more likely.

“Extreme precipitation, like that of Hurricane Maria, has become much more likely in recent years,” the authors wrote in the journal Geophysical Research Letters.

Other research, published in Nature, suggests that tropical cyclones are moving more slowly as the planet warms, causing a “stall” that allows them to dump more rain as they linger in place.

It is unclear whether rain or wind damaged Puerto Rico’s electricity grid.

“Even a small disruption in the transmission lines can cause a loss of power to a large segment of the population,” Josué Colón-Ortiz, executive director of the Puerto Rico Electric Power Authority (PREPA), said Thursday at a House hearing (Climatewire, Sept. 16).

Unlike in U.S. states, Puerto Rico has “no alternative power options” for critical facilities such as hospitals, schools and public safety buildings, Colón-Ortiz told a House Transportation and Infrastructure subcommittee.

In April, a circuit breaker near a power plant caught fire, causing a cascade of generators to shut off, which led to an islandwide power outage that was not fully restored for several days. That was the latest in a series of power outages caused by events such as fires, transmission repairs and vegetation, according to Luma Energy LLC, the private company that owns and operates power transmission and distribution.

“We’ve had repeated interruptions on the island, sometimes involving hundreds of thousands of customers being without power, including me,” Puerto Rico Resident Commissioner Jenniffer González-Colón (R) said at the hearing. “People in Puerto Rico are always expecting those interruptions.”

Tom Sanzillo, an analyst at the Institute for Energy Economics and Financial Analysis, said the widespread power outages reflect bureaucratic infighting over the future of Puerto Rico’s power grid.

Puerto Rico uses oil, natural gas and coal to power its electrical grid, with renewable sources accounting for only a small fraction of generation, according to the National Renewable Energy Laboratory.

After Maria, the island’s utility regulator, the Puerto Rico Energy Bureau, approved a plan that would require 40 percent of power to come from renewables by 2025. Yet the island has made little progress toward those goals in the face of opposition from the PREPA, the island’s utility, which has argued for greater use of natural gas.

“It is an old system and it’s undermaintained. In five years, there has been no significant investment to speak of,” Sanzillo said.

“There are very good plans to use the money well. It has been approved by the energy bureau. It calls for a significant amount of renewable energy,” Sanzillo added. But, he said, “that is not what is going on. And so money is not being spent with any degree of speed, because they are not following their plan.”

Luma Energy, which took over transmission and distribution from PREPA in June 2021, was expected to improve service, but it has been criticized for continued power outages.

At the House hearing Thursday, González-Colón pressed Shay Bahramirad, Luma’s senior vice president for engineering, to explain when Puerto Rico’s electrical grid would be “up to current standards.”

Bahr gave no timetable and said only, “In the upcoming months and years, I can commit to you that the reliability of the system is going to improve.”

Government reports have blamed the fragility of Puerto Rico’s grid on a series of long-standing problems including a history of neglectful maintenance and the territory’s huge debt levels, which dropped its credit rating to “junk” status and cut off access to capital markets in the 2010s.

Those conditions were exacerbated by Hurricane Maria, which left much of Puerto Rico without power for 11 months, making it the longest blackout in U.S. history.

The Government Accountability Office said in a 2020 report that Puerto Rico’s grid “was in poor condition” before Maria, “largely because of PREPA’s underinvestment and poor maintenance practices.”

GAO said Thursday that Puerto Rico has spent only 2 percent of the $21 billion that FEMA has approved for rebuilding from Maria.

Chris Currie, GAO’s director of homeland security and justice, said that FEMA’s “constantly changing policy and guidance” for the use of rebuilding funds have caused delays in generating cost estimates for repair projects and agreeing to the scope of projects.