Why Exxon hates the Rockefellers, its founding family 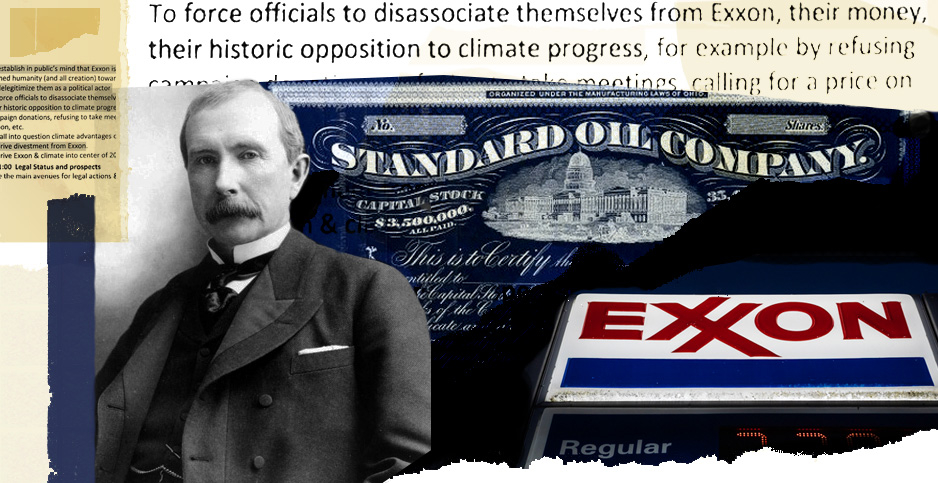 Exxon Mobil Corp. has a strategy for firing back at supporters of climate change litigation against the oil giant: Blame the Rockefellers.

In recent court filings and public statements, Exxon has accused people who support climate liability lawsuits of engaging in a conspiracy bankrolled by members of the elite Rockefeller family.

The allegations, which pit one of the world’s largest oil and gas companies against one of America’s wealthiest dynasties, are more than a little ironic.

For one thing, Exxon is the largest descendant of Standard Oil Co., the business that John D. Rockefeller founded in 1870. The family’s wealth today largely stems from the 19th-century oil tycoon.

For another, the climate liability lawsuits accuse Exxon itself of engaging in a far-reaching conspiracy to obscure the scientific consensus on climate change and block global efforts to rein in planet-warming emissions.

To climate activists, the oil giant is trying to flip the script on the allegations it’s battling in court.

"If there’s ever been a conspiracy, it’s abundantly clear what it is. It’s been a conspiracy over many decades of Exxon and its ilk covering up the greatest threat that human civilization has ever faced," author and activist Bill McKibben said in an interview with E&E News.

"The results," McKibben said, "will be obvious in the geological record of planet Earth for millions of years to come."

To Exxon and its allies, however, a paper trail from the Rockefellers’ charities paints the picture of a tangled conspiracy stretching from journalists to activists to lawyers.

The paper trail starts in 2015, when the Rockefeller Brothers Fund — a New York City-based philanthropic foundation created and run by members of the Rockefeller family — donated $200,000 to InsideClimate News.

Both donations funded bombshell investigations published in InsideClimate News and the Los Angeles Times that revealed Exxon privately knew about climate change in the 1970s but that the company publicly denied the scientific consensus for decades. The investigations spawned the hashtag #ExxonKnew and fueled a wave of climate litigation against the oil giant.

Today, five states and more than a dozen municipalities have filed lawsuits alleging that Exxon and other oil companies misled the public about the climate risks of burning fossil fuels. The complaints ask the industry to help cover the costs of addressing floods, wildfires and other disasters fueled by rising global temperatures.

From 2015 to 2019, the latest year for which data is available, the Rockefellers’ charities donated more than $3 million to organizations that have supported the climate liability lawsuits through advocacy, research or litigation, according to data compiled for E&E News by Anna Massoglia, an investigative researcher at the Center for Responsive Politics.

That includes more than $1 million to 350.org, the environmental group co-founded by McKibben, and $175,000 to EarthRights International, a nonprofit organization involved in a climate liability lawsuit in Colorado.

Lee Wasserman, the director of the Rockefeller Family Fund, said the philanthropic efforts have struck a nerve at the oil supermajor.

"Exxon has accused us and other advocates of conspiracy, which is obviously a very loaded term," Wasserman, who is not a Rockefeller, said in an interview with E&E News.

"In America, of course, it’s considered noble when citizen organizations band together to address major societal concerns, not a conspiracy," he continued. "But I guess if you’re Exxon, the world looks a little different to you."

In a phone call with E&E News, Exxon spokesperson Casey Norton questioned why this story was newsworthy. Norton didn’t respond to follow-up requests for comment.

Standard Oil controlled more than 90% of petroleum production in America within a few decades of its founding. By the time John D. Rockefeller died in 1937, he was the richest man in the world, leaving behind a fossil fuel fortune for his descendants.

Today, there are more than 70 heirs of the oil tycoon with a combined net worth of $8.4 billion, according to Forbes. Many of them have become increasingly concerned about climate change — and increasingly uneasy about the source of their wealth.

One of those heirs, Neva Rockefeller Goodwin, the great-granddaughter of John D. Rockefeller, co-sponsored a resolution at Exxon’s annual shareholder meeting in 2008 demanding that the company study the risks it faces from climate change.

The resolution failed. But the battle was just beginning.

In 2016, after unsuccessfully trying to persuade Exxon’s top brass to take climate change more seriously, Goodwin went public with her discontent. She penned an opinion piece in the LA Times announcing that she was selling her shares in the company and donating the $400,000 in proceeds to the Rockefeller Family Fund’s environmental program.

"I was really disgusted with the lying that the company had been doing. And I just didn’t feel good about maintaining a relationship with this company, which had been started, of course, by my great-grandfather," Goodwin, an economist at Boston University, said in an interview with E&E News.

"I don’t say he was doing the wrong thing to start that company. In his day, that was the progressive thing to do," she added. "But looking back, we know that human extraction and use of fossil fuels has done enormous damage to the planet and to our species’ future."

Around the same time, the Rockefeller Family Fund announced that it would divest its portfolio from fossil fuels in a scathing statement that singled out Exxon.

"We would be remiss," the leaders of the fund wrote, "if we failed to focus on what we believe to be the morally reprehensible conduct on the part of ExxonMobil."

The Exxon-Rockefeller feud is not a new phenomenon. The New York Times detailed the controversy in a 2016 piece titled "Exxon Mobil Accuses the Rockefellers of a Climate Conspiracy."

But in the five years since then, the mud-slinging has intensified, as Exxon has funneled its attacks on the Rockefellers through a network of high-powered consultants and lawyers.

FTI Consulting Inc., a global firm whose fossil fuel industry clients include Exxon, has written a flurry of posts blasting the Rockefellers on Energy in Depth, a news and media site run by the Independent Petroleum Association of America.

In a 2019 post titled "How the Rockefellers Manufactured the Climate Liability Campaign," FTI’s Spencer Walrath wrote that backers of the climate liability lawsuits "have all been bankrolled by the Rockefellers, a wealthy family that owes its riches to the very company it is now seeking to destroy."

Asked for comment, William Allison, a spokesman for Energy in Depth and a senior director at FTI, said in an emailed statement: "For nearly a decade, members of the Rockefeller family have openly spent tens of millions of dollars to support plaintiffs’ attorneys, activist groups, academics and journalists who advocate for lawsuits that they fully admit will do absolutely nothing to address climate change."

Allison added, "Governments, energy companies, investors and labor unions are focused on solutions, while the Rockefellers are increasingly on an island — wasting time, money and resources on a campaign that everyone else knows is a failure."

In a recent presentation in the climate liability case brought by Massachusetts officials, Paul Weiss partner Justin Anderson pointed out that climate activists held a 2016 meeting at the Rockefeller Family Fund.

The participants in the meeting "referred openly to an Exxon campaign, the goals of which were to create scandal, force officials to disassociate themselves from the company and delegitimize Exxon Mobil as a political actor," Anderson told Massachusetts Superior Court Justice Karen Green at a March hearing in the case.

"ExxonMobil has unambiguously alleged that the Attorneys General relied on this so-called journalism to provide a convenient pretext for their unlawful exercise of state power to discriminate based on viewpoint," the lawyers wrote.

Asked for comment, David Sassoon, founder and publisher of InsideClimate News, said in an email to E&E News: "We published a nine part series based on Exxon’s own internal documents, and our work, which has proven itself to be bulletproof, speaks for itself. To claim it’s the result of conspiracy is silly and baseless."

Sassoon added that Exxon has never asked the news outlet to issue a correction.

‘A conspiracy to end world hunger’

From 2015 to 2019, the Rockefeller Brothers Fund donated $700,000 to the Institute for Governance & Sustainable Development, according to the data compiled by the Center for Responsive Politics. The Rockefeller Family Fund gave an additional $75,000.

Until last month, the Institute for Governance & Sustainable Development housed the Center for Climate Integrity (CCI), a Washington-based group that seeks to raise public awareness of the climate liability lawsuits through a "Pay Up Climate Polluters" campaign.

Wiles responded sarcastically when asked about these allegations.

"They think that the First Amendment allows them to lie about their role in causing climate change, but it does not allow advocates to talk to each other about how to deal with that," Wiles said. "So it’s an interesting interpretation of the Constitution."

Rockefeller funding has supported the Center for Climate Integrity’s work "across all program areas," he added, including staff salaries, legal assessments and the ExxonKnews newsletter.

From 2015 to 2019, the Rockefeller Family Fund provided $175,000 to EarthRights International, a nonprofit organization that says it combines "the power of law and the power of people in defense of human rights and the environment."

FTI has described Earthrights as a "shadowy group" that has "connections to all the major anti-fossil fuel players backed by wealthy environmentalist foundations."

Marco Simons, general counsel at EarthRights International who is on the legal team representing the three Colorado governments, said the Rockefellers don’t exert control over his work.

"We never allow funders to interfere with our attorney-client relationships or call the shots in terms of litigation strategy. That would be a serious ethical violation," Simons said.

"On a more general level, I’m not sure why it’s surprising that people who care about climate change are funding work on climate change," he added. "So if that’s a conspiracy, I don’t know what to say."

Many of the climate liability lawsuits against Exxon have been tied up in procedural wrangling over whether they belong in state or federal court.

In the meantime, Goodwin, the great-granddaughter of John D. Rockefeller, counts a small victory outside the courtroom.

Goodwin said that although her early meetings with Exxon were largely unproductive, she was able to convince the company to stop running advertorials in The New York Times touting its commitment to fighting global warming.

"We had been having some dialogue, and we discovered that the company was not talking with us in good faith at all. Basically what we realized was we were meeting with their [public relations] people and it wasn’t going anywhere," Goodwin said.

"But I told them, ‘That ad is making you look really silly,’" she added. "And the ad disappeared and never appeared again. That’s the one success that those conversations had.’"

Many of the climate liability lawsuits cite Exxon’s advertorials in the Times as an example of deceptive messaging to consumers, including the complaints brought by Delaware and Minnesota.

Exxon’s advertorials, which appeared in the Times every Thursday from 1989 to 2004, effectively "misled the public" about the scientific consensus on global warming, Harvard University researchers Naomi Oreskes and Geoffrey Supran concluded in a 2017 paper.

The Harvard researchers, too, have faced pushback from Exxon. Vijay Swarup, the company’s vice president of research and development, has accused the researchers of using "cherry-picked" data, while FTI has called out the paper’s partial funding from the Rockefeller Family Fund.

"I see this stage right now as the fighting," he added. "In other words, the evidence that the fossil fuel industry endangered the public by misleading it about climate science has become so overwhelming that Exxon is coming out swinging with everything they’ve got."