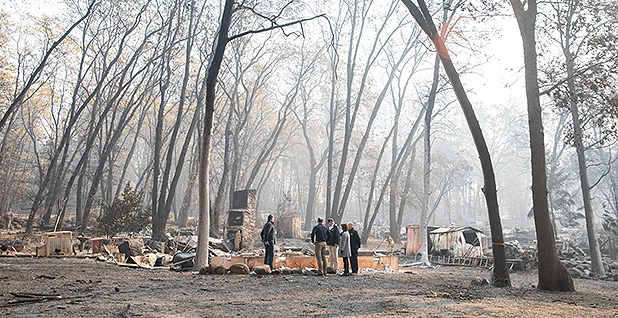 President Trump and other officials examined the damage from the Camp Fire in California in November 2018. Shealah Craighead/White House/Flickr

A former Department of Homeland Security official’s allegation that President Trump sought to halt disaster aid to California in 2018 for political revenge revives the notion that presidents manipulate disasters for political gain.

But the charge by former DHS Chief of Staff Miles Taylor, who says in an explosive new political ad that Trump was "rageful" at California voters while wildfires were destroying their homes, ignores one fact.

California has received more disaster declarations than any other state since Trump took office.

Trump’s approvals have brought California $3.5 billion in federal disaster aid — more than every jurisdiction except for Florida, Texas and Puerto Rico, all of which sustained extraordinary damage in the 2017 hurricane season.

Nearly $1 billion went to California for wildfire relief after Trump blew up at officials.

Trump’s criticism of Democratic officials and other perceived opponents during disasters has been unprecedented and loud.

Yet when it’s come to providing help, Trump has quietly followed his predecessors in taking a by-the-books approach to approving Federal Emergency Management Agency disaster aid.

"FEMA is going to continue to do their job," said Elizabeth Zimmerman, head of FEMA disaster response in the Obama administration.

A former FEMA official who worked for the agency under Trump disputed Taylor’s account of the president seeking to cut off disaster aid for California to punish a state that voted overwhelmingly against him in 2016.

"Disaster assistance should not and has not ever under this administration been a partisan task," the official said in an interview.

The official acknowledged that Trump had criticized California Gov. Gavin Newsom, a Democrat, during the wildfires over the state’s forest management, and said the president’s criticism overshadowed his actions.

"There is his political side — the public-facing tweeting persona — and there is what actually happens," the official said of Trump. "What is often missed is what he does on a day-to-day basis."

FEMA, the official added, "is really a well-oiled machine that runs like clockwork."

Taylor said in an interview Tuesday with "Good Morning America" after his political ad began airing that FEMA "didn’t follow through" on Trump’s command to cut off disaster aid to California. "I think they ultimately determined from the lawyers that a tweet wasn’t an official order."

Trump had grown "frustrated" with Newsom and predecessor Jerry Brown, also a Democrat, and "didn’t feel like he had a base of supporters in California," said Taylor, a former Republican congressional staffer who is supporting Democratic presidential nominee Joe Biden.

"So as wildfires were burning down houses in the state, the president basically said to us, ‘I don’t care; these people haven’t done enough to deserve it; cut off the money,’" Taylor told "Good Morning America."

A president probably would not be able to block disaster payments after declaring that a state is entitled to the aid, a former senior FEMA official said.

"It’s really, really hard, if not impossible, to manipulate the money once it starts to flow," the official said. "Once a program is turned on and assistance starts moving, there’s not an opportunity to intervene."

"There are always allegations of political decisionmaking in a declaration. There have never been any super blatant examples," the official added.

FEMA has maintained a professional, nonpartisan reputation while the agency has become increasingly important.

Disasters such as wildfires and hurricanes are more frequent and costly, partly because climate change is intensifying storms, flooding and drought. FEMA has taken a lead position in coordinating the federal response to the COVID-19 pandemic and received a $45 billion cash infusion from Congress in March for disaster response.

Yet politics surround FEMA because it plays a central role in both distributing disaster aid and in approving governors’ requests for a disaster declaration to unlock federal money, personnel and supplies. Although disasters are declared by presidents, FEMA does the initial damage assessment and makes recommendations to the White House, which are usually followed.

"The president sees the numbers and the brief and personally makes the decision on whether the disaster or emergency is declared," former FEMA Deputy Administrator Tim Manning said.

After federal aid is approved, presidents are advised of progress in a disaster by aides. In a major disaster, the FEMA administrator will personally brief a president, Manning said.

Members of Congress routinely lobby FEMA and the White House to approve disaster aid for their states. They hate when requests are denied.

"I was yelled at by senators from both parties. I was screamed at by representatives from both parties. Governors never had a problem calling me an incompetent boob for turning down their requests," said Craig Fugate, who ran FEMA during the Obama administration.

"The fact that I got yelled at by both parties at all levels signifies we were simply calling balls and strikes," Fugate said, calling nonpartisanship essential to FEMA’s credibility.

"Politicizing disaster response and disaster declarations is a very short-sighted policy," Fugate added. "What happens when we start thinking that disasters are rigged and only the president’s party gets help? How much will the public want to keep paying these billions in disaster costs if they think it’s a rigged system?"

The other side of Taylor’s story

Even as Trump assailed antagonists such as Newsom, Brown and Carmen Yulín Cruz, the mayor of San Juan, Puerto Rico, he has spurned political allies.

Yet Trump’s public approach to disasters — like his approach to many presidential tasks — has been marked by conflict with perceived enemies, particularly in California during the wildfires and in Puerto Rico after Hurricane Maria in 2017.

Trump’s threats to cut off disaster aid to California were well-publicized during the 2018 wildfires, although there was no direct indication that the threats were politically motivated. Trump wrote several times on Twitter that California would lose federal disaster aid if the state did not improve its management of forests.

Taylor, the former DHS chief of staff, told MSNBC yesterday that Trump expressed disdain for Puerto Rico on a trip to the island in August 2018 and wanted to sell the U.S. territory "because in his words, Puerto Rico was dirty and the people were poor."

In an interview with CNN on Tuesday, Taylor recalled briefing Trump in the Oval Office in September 2018 about Hurricane Florence as it approached the Carolinas. Looking at images that staffers presented showing Florence, Trump asked if hurricanes always spin counterclockwise, Taylor recalled disdainfully.

"He just marveled at the way that hurricanes spin, in a way a third grader might learning about earth science," Taylor told CNN. "This is the president that we’re talking about to keep us safe."

Taylor didn’t mention that shortly after the briefing, Trump approved major disasters in North Carolina and South Carolina that have provided the states with $880 million in federal aid and gave money to nearly 40,000 people.