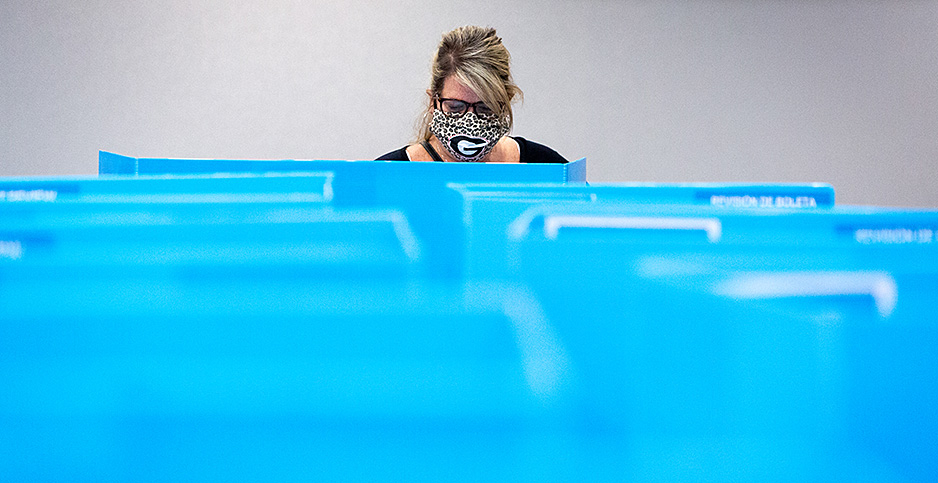 Eight years ago, when the Atlanta suburbs were comfortably Republican, GOP presidential nominee Mitt Romney won 55% of the vote in Cobb and Gwinnett counties and coasted to victory in Georgia over President Obama.

Today, the Atlanta suburbs have completed a remarkable flip that shows how Democrats can win states with large, diverse metro areas that are not dependent on fossil fuel industries and open to messages on climate and the environment.

Cobb and Gwinnett, home to 1.5 million people combined, have given Biden 57% of their vote, according to preliminary returns that state election officials hope to finalize soon. Early Friday morning, Biden overtook Trump with a razor-thin lead of 917 votes statewide, making Georgia’s 16 electoral votes a key to selecting the next president.

Georgia’s transformation from a Republican stronghold to a swing state has been driven by population growth and increasing diversity in the Atlanta metropolitan region, which is now as big as metros around Philadelphia, Miami and Washington.

No other state except for Arizona has undergone such a red-to-purple political transformation since 2012.

"Atlanta has become this mecca for professional Blacks and Hispanics," said University of North Georgia political scientist Glen Smith. Black people account for 33% of Georgia’s 10.6 million residents. Hispanics make up 10% of the population.

"It’s really been the influx of Blacks from other states that want to live in Atlanta. Now there’s just so many more Democrats in the state than there were previously," Smith said.

The Georgia economy, centered increasingly in corporate-friendly Atlanta, now has more in common with Colorado and Virginia than with Alabama and South Carolina — and its politics could follow.

Colorado and Virginia have seen their economies modernize around vibrant cities and their politics transformed by the influx of college-educated professionals concerned about environmental issues.

In Georgia, the eight-county Atlanta metro area accounts for 40% of the state population and has become a Democratic powerhouse. It supported Biden over Trump by a margin of 68% to 31%, according to preliminary results.

"It’s a pattern you’re seeing in a lot of states. As the demographics shift, the politics shift," said Gregg Murray, a political scientist at Augusta University in Georgia.

Both Colorado and Virginia have become regional leaders on climate issues — and reliably Democratic, supporting every Democratic presidential nominee since 2008.

Virginia Gov. Ralph Northam (D) signed a law in April requiring most coal plants to close by 2025 and forcing the state’s largest utilities to switch to renewable energy by 2050. On Tuesday, Denver voters approved a city sales tax that will pay for climate projects to reduce carbon emissions and increase resilience against climate impacts (Climatewire, Nov. 4).

Georgia has not taken similar steps. But Biden’s aggressive climate plan and pledge to transition away from fossil fuels resonated with some Georgians who have felt the effects of climate change through hotter temperatures and storms such as Hurricane Michael in 2018 and Hurricane Irma in 2017.

"When Biden said he would end the oil industry, it didn’t play negatively here in Georgia. We’re not a fracking state," said Joshua Meddaugh, chairman of the Department of Social Sciences at Clayton State University in Georgia. "Atlanta is a financial city."

Democrats began to pay attention to Georgia after the 2016 presidential election when Hillary Clinton lost the state to Trump by 5 percentage points. Georgia was one of the few states where Clinton did better than Obama had done in 2012.

A watershed occurred in 2018 when Democrat Stacey Abrams lost a race for governor by just 55,000 votes out of nearly 4 million ballots cast. Abrams, who is Black, has become a national political figure who is vocal about climate change as an issue of racial equity in the South.

"The Stacey Abrams race was a sign that the state might be starting to get more and more in play," said Murray of Augusta University.

The Southern Economic Advancement Project, a think tank of which Abrams is executive director, issued a report in June that called the South "highly exposed to climate change impacts given its extreme vulnerability to increased temperatures and rising sea levels, low levels of climate mitigation and adaptation to date, and high level of inequality."

Biden considered Abrams as his running mate before selecting Sen. Kamala Harris of California. Recently, Abrams played a major role in galvanizing voters for Biden, raising the prospect that she could serve prominently in a Biden administration, perhaps dealing with climate change.

"She really energized the vote, especially in Atlanta," said Smith of the University of North Georgia. "She deserves a lot of credit for Biden’s [metro] win. She was able to get to voters who hadn’t voted before and get them to polls."

But as Georgia has become a swing state in presidential elections, it has remained solidly Republican in local and state contests.

Both the Georgia Senate and the House of Representatives have strong Republican majorities. All 11 statewide elected officials are Republicans. Both of Georgia’s U.S. senators are Republicans, as are eight of the state’s 12 House members. (There are two vacancies.)

Political transformations often start with national elections and can take years to filter down to local contests.

That might be evident in the state’s two races for U.S. Senate. Sens. Kelly Loeffler and David Perdue, both Republicans, could be headed toward runoff elections on Jan. 5 after facing competitive Democratic challengers Tuesday. Under Georgia law, runoffs occur when no candidate receives a majority of the vote in the general election.

"A lot of people who turned out to vote are unlikely to vote in January," said Murray of Augusta University. "I think you’re going to see more of a return to what you’d expect in Georgia politics where Republican candidates have an advantage."