Why Mary Nichols could lose climate clout at EPA 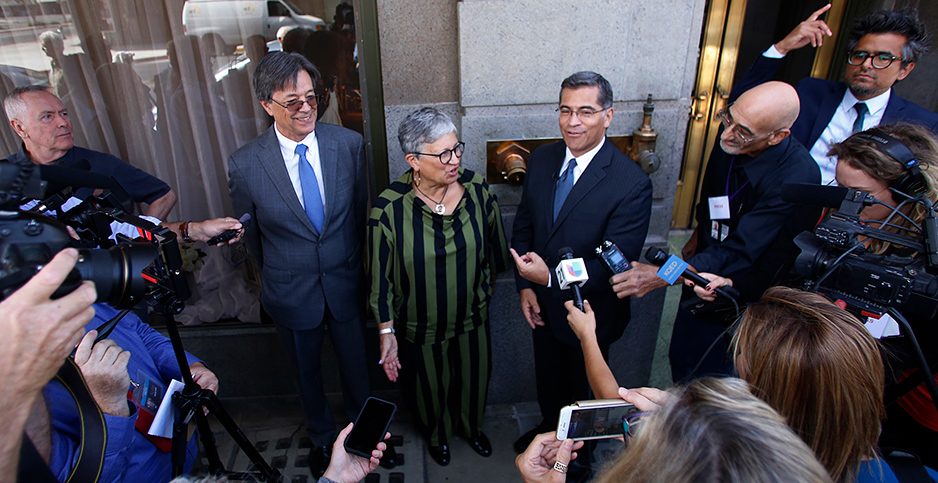 Nichols, a contender for the EPA job under President-elect Joe Biden, spent decades building a track record that looks tailor-made for helping Biden pursue his aggressive goal of zeroing out carbon pollution by 2050.

She’s forced businesses to cut emissions, struck deals with car company executives on mileage standards and spurred production of more green alternatives to fossil fuels — all as chair of the California Air Resources Board, an agency that’s strikingly similar to EPA.

But those accomplishments could be difficult to replicate in Washington, where divisive climate politics dominate a Republican Party that’s set against EPA regulatory action to address rising temperatures.

Instead of tapping into the most modern slate of state climate laws in the country, Nichols would find herself navigating antiquated environmental statutes passed when climate science was a niche field of research.

"California has the most elaborate policy framework, set of policies for addressing climate change, of maybe any jurisdiction in the world," said Dan Sperling, a member of CARB and an ardent supporter of Nichols. "Going to Washington, I imagine it’s going to be frustrating because most of that scaffolding of policy doesn’t exist. There’s going to be a lot of effort needed to build that scaffolding."

California law A.B. 32, which passed in 2006, "provides a really broad mandate to the state’s Air Resources Board, basically to develop whatever programs it believes are needed in order to meet the [climate] targets," said Sean Hecht, co-executive director of UCLA School of Law’s Emmett Institute on Climate Change and the Environment.

The result was a series of regulations that set the state on a path toward achieving carbon neutrality by 2045.

Federal laws don’t give EPA the same kind of authority, at least when it comes to emissions from power plants, refineries and industrial sources.

The Clean Air Act, Clean Water Act and National Environmental Policy Act were passed in the 1970s, before most people knew about climate change. The last updates to the Clean Air Act came in 1990.

While the Supreme Court’s 2007 decision in Massachusetts v. EPA provided authority to regulate greenhouse gases as an air pollutant, use of that authority is subject to legal challenges.

"There’s a lot more potential for people who don’t want regulation to tie up EPA authority in court," Hecht said. "That is definitely something that EPA has to keep in mind."

The Obama administration, for example, proposed the Clean Power Plan to limit emissions from existing power plants. A lawsuit from nearly 150 groups asserted that it was illegal, and the Supreme Court agreed and halted enforcement while the case moved through the courts. The rule was later replaced with a weaker version by the Trump administration.

The Clean Air Act allows EPA to develop rules for some stationary sources of pollution, such as power plants. But the language mandates that any rule must "reflect the best system of emissions reduction which … has been adequately demonstrated."

EPA can force plants to install pollution controls, but there really aren’t any demonstrated ones for carbon emissions, said Jeff Holmstead, partner at the Bracewell LLP law firm and head of EPA’s Office of Air and Radiation in the George W. Bush administration.

In terms of cutting greenhouse gas emissions, "they can’t just say everybody has to reduce by 10% or 20%," he added.

Nichols faced no such limit in California.

"It’s very clear that the Air Resources Board has the authority to do more or less whatever it needs to do to address greenhouse gas emissions," Hecht said. "There’s no real equivalent in federal laws."

Other candidates for the EPA job include Heather McTeer Toney, a regional EPA administrator under President Obama, and Collin O’Mara, president and CEO of the National Wildlife Federation.

Nichols, in an interview this week with E&E News, acknowledged that she is pursuing the EPA administrator’s job, though she wouldn’t reveal where she is in the screening process. Either way, she’s leaving her current post as CARB chair later this month. She’s held that role under current Gov. Gavin Newsom (D) and two former ones: Republican Arnold Schwarzenegger and Democrat Jerry Brown.

She’s worked at EPA before, as assistant administrator of the Office of Air and Radiation during the Clinton administration. So "she definitely knows how Washington works and what the limits are there," Hecht said.

Those limits are often political. And they would offer challenges on a scale that Nichols did not have to contend with in California, where Democrats have held legislative control for 25 years.

Sperling of CARB said some of the legal "scaffolding" that could help Nichols pursue federal climate policy would have to come through Congress. Others could derive from federal agencies.

"It’s going to be controversial for sure," Sperling said.

Nichols, he added, "has thick skin. She really is resilient and knows how to work even with groups she knows she’s in conflict with."

California climate programs include a cap-and-trade market for carbon emissions, launched in 2012. It forces refineries, cement makers and others to cut their carbon pollution. An effort to pass a similar program nationally failed during the Obama administration.

There is a federal renewable fuel standard that requires some volume of fossil fuels for transportation to be replaced with greener ones. But it’s "a very poor version" of California’s low-carbon fuel standard, said Sperling, who is director of the Institute of Transportation Studies at the University of California, Davis

The state law requires a 20% reduction in the carbon intensity of transportation fuels by 2030. Businesses complying with it have generated credits that sell for more than $200 a carbon ton.

Nichols oversaw enactment of a first-in-the-nation policy to phase out diesel trucks by 2045, and the state air board recently passed a rule forcing pollution cuts by heavy-duty trucks (E&E Daily, Dec. 8).

There’s nothing similar at the federal level.

Nichols knows how to work through political difficulties, said Brown.

"She has the legal, regulatory and political experience necessary to do the job," Brown said in an interview. "There’s nobody else in America who’s as well-suited based on the problem-solving that she has put herself through during the last more than three decades."

When the air board worked to implement A.B. 32, the main climate law, Nichols helped craft the "scoping plan" that determined how the state would cut greenhouse gases to meet the law’s target.

"There’s not a plan like that anywhere in America, even from the EPA under Obama," Brown said. Nichols, he said, "led that effort" in California.

The plan involved taking existing state policies and calculating what percentage of reductions each sector of the economy needed to meet by 2020, said former state Sen. Fran Pavley (D), who authored the law.

Nichols could sit down with executives of oil companies or manufacturing industries and "and make some compromises," Pavley said. Nichols tended to do that with corporations for which it wasn’t technically feasible to make all the carbon reductions, especially if there were concerns they would leave the state.

Cap and trade has raised the ire of environmental justice groups representing disadvantaged communities. They argue that the program allows refineries and other businesses to buy "allowances" sold at auction, instead of reducing their pollution.

A group of 70 environmental justice groups sent a letter to the Biden transition team opposing the appointment of Nichols to EPA.

"She just generally has failed to appreciate, and in many respects has neglected the needs and priorities and advocacy of environmental justice communities," said Gladys Limón, executive director of the California Environmental Justice Alliance.

Brown defended Nichols. It wasn’t practical for CARB to tell refineries not to emit pollution, he said. Those refineries might have shut down, even though motorists still drive gasoline-fueled cars. Currently, zero-emissions vehicles constitute less than 2% of the roughly 28 million passenger vehicles registered in California.

"So you can’t have magical thinking," Brown said.

Cleaner cars are an area where EPA has a lot of authority, said Holmstead, formerly with EPA. When it comes to cars and trucks, "they can go kind of the path that California has taken," and "it’s just a question of will drivers in the rest of the U.S. be willing to go for the kinds of things that drivers in California will."

Nichols said if she became EPA administrator, she’d start with reaching an agreement on vehicle emissions and mileage standards and develop a plan "that gives an emphasis to zero-emissions vehicles going forward."

She knows how to get it done, Holmstead said.