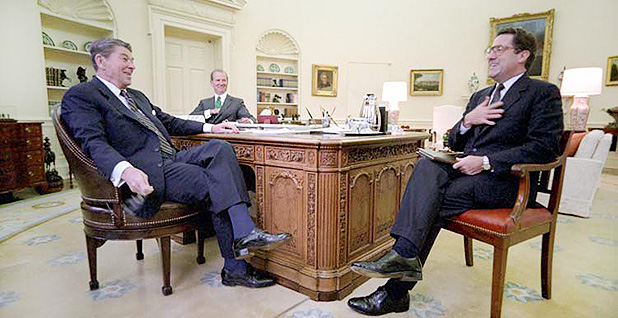 He promised to "curb the size and influence of the federal establishment" and followed up with a federal hiring freeze and plans to abolish two behemoth agencies: the Energy and Education departments.

President Trump has taken a page from the Reagan playbook on the federal workforce.

Trump similarly slammed the notion of Big Government in his inaugural address: "For too long, a small group in our nation’s capital has reaped the rewards of government while the people have borne the cost. Washington flourished — but the people did not share in its wealth." Trump also swiftly froze federal hiring, and his chief strategist, Steve Bannon, said that a White House priority is the "deconstruction of the administrative state."

On the campaign trail, Trump advocated eliminating U.S. EPA. He picked an EPA administrator who made his name suing that agency and a DOE chief who had said he would like to eradicate that department. (The president and Energy Secretary Rick Perry have since walked back their comments about abolishing those agencies.)

But Reagan’s plans to drastically shrink the size of the federal government and to ax big agencies failed, and many observers predict that the Trump team will face similar hurdles.

When Reagan departed the White House, the federal workforce was even larger then it was when he took office.

There were about 2.2 million federal employees when Reagan left office in 1989, compared to 2.1 million — an uptick of about 95,000 workers — when he entered the White House in 1981, according to data from the Office of Personnel Management.

‘Very hard to abolish an agency’

In 1981, Reagan approved a plan to eliminate DOE and send most of its functions to the Commerce Department in a new shop called the Energy Research and Technology Administration, The New York Times reported that year.

Another proposal floated in 1985 would have merged the Interior and Energy departments, the Times reported.

But those proposals fell through amid staunch opposition in Congress.

Then-Senate Budget Chairman Pete Domenici (R-N.M.) said in 1982, according to the Times, that unless administration officials "decide to take a different stance on this issue, it’s dead."

It’s "very hard to abolish an agency of any size," said John Palguta, an expert on the civil service and former vice president for policy at the Partnership for Public Service, in part because every agency develops a constituency. So if an administration would rather not have the Department of Education or an EPA, "They find that, well, there’s a lot of folks that disagree."

In the case of DOE, "we floated the thing a couple of times, and frankly, the Congress was very resistant to it," said John Herrington, who was Reagan’s third Energy secretary. He was on board with the plan to dismantle the department and ship off its duties to other offices.

"There are so many activities in the Energy Department that probably ought to be over in the Defense Department," he said in an interview. "When [President] Carter put this all together, they just threw agencies all together and called it the Department of Energy, so it probably was not a good idea the way they did it."

Herrington said he didn’t get a lot of pushback from DOE staff at the time, because employees would likely keep their jobs as the programs were sent to other agencies.

And he wasn’t worried about losing his job, he said: "President Reagan would have found something else for me to do."

Where past administrations have failed to dismantle departments, they have instead adopted a "starve the beast" tactic, Palguta said, by trying to limit agencies’ reach through budget and staffing cuts.

But that strategy can pose problems, Palguta added. For example, he said, if EPA "took the kind of hit the administration is proposing, something is going to go off the rails."

If the Trump administration were to succeed in slashing EPA’s budget ahead of a major environmental disaster, the White House could experience pushback from voters.

"President Reagan discovered that government backsliding on protecting Americans’ health and the environment would not be tolerated by an awakened, angry and energized public," Ruckelshaus wrote. "[A]s soon as the agency stops doing its job," he added, voters are "going to be up in arms."